I've been immersed in the world of personal finance for about 25 years. I'm aging now – as is my wife, Carolyn. She regularly reminds me that a gentleman always remembers a woman's birthday but never her age. Sorry, dear, I know exactly how old you are. But I digress.

The point is, I've been around long enough to remember what it was like to deal with the taxman of a generation ago. We're in a very different world today. The culture at the Canada Revenue Agency (CRA) is not what it used to be – and we should all be concerned.

Twenty years ago, the CRA was full of reasonable people who used common sense when looking more closely at your tax affairs.

That type of employee seems to have been replaced with staff who are all too often smug and patently unreasonable – who choose to ignore common sense. A verdict handed down by the Supreme Court of British Columbia this week speaks to the failure of the CRA's leadership to promote a culture that is fair and reasonable with taxpayers.

Tony and Helen Samaroo are a couple who for the past 10 years have been battling the CRA. They owned and operated a restaurant, nightclub and motel in Nanaimo, B.C. In 2008, they were charged with 21 counts of tax evasion. The CRA accused them of skimming $1.7-million from their restaurant without paying tax.

The Samaroos were acquitted of all charges after a 19-day trial in April, 2011. Mr. Samaroo was found by the judge to be a credible witness. His demeanour was impressive, and his explanations were plausible and consistent with significant and material aspects of the evidence.

In March, 2012, the Samaroos commenced legal action against the CRA for malicious prosecution, and last week, Justice Robert Punnett sided with the couple, awarded them about $1.7-million and found the CRA liable for the actions of Keith Kendal, a senior investigator for the CRA (who was accused of suppressing and misstating evidence), and other employees.

The words of the judge were harsh: "The CRA is vicariously liable for the conduct of Mr. Kendal and its employees. Its conduct in this case was high-handed, reprehensible and malicious." He went on to say: "It offends this Court's sense of decency and was a marked departure from conduct expected of an individual in Mr. Kendal's position and an agency such as the CRA."

Surely this type of behaviour by CRA employees is the exception, not the rule. While it's true that many of its employees do care and want to be fair, I have to agree with Justice Punnett when he went on to say: "There is also evidence that Mr. Kendal's approach may indicate an unfortunate culture within the CRA."

If you take the time to speak to tax professionals around the country, you'll hear many stories of a changing culture at the CRA. I'm talking about a shift from using common sense to resolve issues early in the dispute process to forcing taxpayers to file notices of objection or notices of appeal because front-line CRA employees simply refuse to listen to logical explanations.

Prominent tax lawyer David Rotfleisch says "some tax audits seem like make-work projects or a game of chicken." He adds that "if you get audited, you can expect to get put through the wringer by CRA auditors who defy logic and reason, even when presented with clear evidence of no wrongdoing." This does nothing but waste the time and money of taxpayers.

She had no idea.

There are taxes owing, and she wants to pay these off as soon as possible. After negotiating a reasonable payment plan with an empathetic CRA auditor, his supervisor vetoed the payment plan and wants payment today – even though she doesn't have the means.

She's losing sleep over this, and it's affecting her health. She's still hopeful that the CRA will do the right thing and agree to a payment plan she can manage.

Prime Minister Justin Trudeau talks about making taxes fair for the middle class. How about making the CRA's dealings with honest taxpayers fair? If Mr. Trudeau wants a fair tax system, start by changing the culture at the CRA. 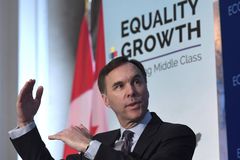