Postmedia Network Inc. is accelerating plans to slash costs at titles across the country, as it grapples with a heavy debt load and a relatively bleak view of the future of print advertising.

As the industry confronts a prolonged slump in advertising, Postmedia has moved aggressively to shore up its balance sheet and centralize the production of its newspapers.

The newspaper chain's approach will be closely watched by other publishers across the country, who are having trouble growing digital revenues fast enough to make up for losses in print revenues.

Its plans have come into sharper focus this week.

Just a day after the Edmonton Journal said it would outsource the printing of the newspaper, The Gazette in Montreal said Tuesday that it would begin using centralized pages for its national and international coverage, and shrink to two sections.

By the end of the month, all of its newspapers will use shared pages built in Hamilton for their non-local content in a bid to centralize story selection and editing – local editors currently select and edit the national and international stories that appear in their pages.

"Newspapers everywhere are seeing a decline in revenue and it may not come back," said Paul Godfrey, the company's chief executive officer.

"The truth is, it's not coming back. The only thing to do is reduce legacy costs and change the way you do business. You want to survive? That's what has to happen."

Many North American print media companies, including The New York Times and several others across the United States, have responded to a weak ad market by introducing paywalls, which force readers to pay for their online consumption. But Mr. Godfrey says the key to survival is to cut costs.

The summer has seen a flurry of announcements from Postmedia that are intended to help it cut spending by $120-million over the next three years and repay its $480-million in debt – including plans to reduce the number of publishing days at some papers and the sale of the company's Toronto headquarters.

It's a concession that the chain's best earning days may be in its past: In its latest quarter, Postmedia lost $12.1-million compared with a loss of $2.7-million in the same quarter last year.

Postmedia is not alone.

The Globe and Mail had employees take four unpaid days each this summer to help reduce costs through the advertising slump.

Postmedia has spent the past several months laying the groundwork for its restructuring. It has closed its Ottawa-based wire service and laid off copy editors and page designers – once seen as the lifeblood of daily newspapers – to send their work to a centralized facility in Hamilton.

Last week, it refinanced $250-million in debt to buy itself some time to undertake the broader restructuring. The deal was seen as key, because the money was used to pay back loans that could have caused the company some difficulty next year.

The company is now turning its attention to how its 10 major-market newspapers operate and deliver news to consumers. The first glimpse of the centralized future was unveiled Tuesday as The Gazette said it would compress into two sections and focus on analysis instead of breaking news.

"It's something we've looked at doing over the years," Gazette publisher Alan Allnut said. "We feel the print side needs to be more compact, but the focus on local is inevitable for city newspapers."

It's the first of the papers to announce the changes that will soon occur across the chain, and will leave much of the editorial decision-making power in the hands of editors outside of each newspaper's city.

The Hamilton editors, led by industry veteran Lou Clancy, will also be allowed to determine which stories appear on the front page of each of the chain's papers, although local stories will take precedence.

"I know some people think this isn't a good way to go," Mr. Godfrey said. "But when you explain the situation and tell them about the state of this industry right now, they usually come around." 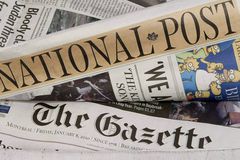 Read Postmedia's internal memo
May 7, 2012
Follow us on Twitter @globeinvestor Opens in a new window
Report an error Editorial code of conduct