There is a quiet scene in the 1953 film Tokyo Story that could be required viewing for everyone thinking about estate planning.

In depicting the subtle, unspoken disunity of a family in mid-century, post-war Japan, director Yasujiro Ozu shows an elderly couple making a long journey to visit their grown children. Shortly upon returning, the wife dies, and the family grieves. Yet one daughter is surprised and then angered by an older sibling, who talks so soon after the funeral about wanting one of mother's linen kimonos.

Estate planners see this kind of thing a lot, and much worse, and in far more complicated financial terms. But it gets at the core complexity of dealing with raw emotion, matched with doling out property and the dry calculation of tax and probate fees.

Toronto estate lawyer Rachel Blumenfeld once dealt with a family fixated on who would get one of grandmother's blankets. Jewellery is usually contentious, as well as cottages and vacation homes for all the family memories and property value wrapped up in them.

Here's the first order of advice lawyers give to clients: With a clear head, select the executor of your will, choose a person who will have power of attorney over your finances, and a person who will have the ability to make decisions for you if you no longer can. These tasks might not be suited to just one person.

"Many clients have somebody that they feel would be in a better position to make, say, an end-of-life, medical-health decision," said Hugh McLellan, estate lawyer at McLellan Herbert in Vancouver. "Some people don't want to put their spouse in that position. Some people say, 'Well, my cousin's a doctor, and really that's the opinion I trust.' Having said that, the majority of my clients do pick the same person. Typically spouses pick each other and then pick an alternate."

But even then, problems can arise under the simplest, most innocent of circumstances. A single-document will may not be enough if the family's assets are complicated, such as owning a family business, or if it's a blended family.

For instance, if a will stipulates that everything is being left to the kids, yet if the home and assets are actually jointly owned by the other spouse, then the will generally won't cover all of those jointly held assets, Ms. Blumenfeld said.

"Usually what I will start off with is, what do people own, how do they own it, and what are the tax consequences that you have on death?" she said.

"If everything is going from one spouse to another, usually there aren't going to be a lot of tax issues. But as soon as you're going to the next generation, or to other people, there will be capital-gains tax on any increased value in assets – other than a principal residence," she said.

In other words, capital gains on the principal residence is tax exempt, but other assets and other property, including a cottage or vacation home, aren't.

So, beyond merely deciding who should get what, capital-gains tax is a key factor when considering the transfer of assets to children, because it's the estate that gets hit with the tax. So, those who get the estate also get the tax burden. This makes it important to think not only of how one's assets and property are divided, but also how any taxes are shared.

Ms. Blumenfeld gives this example: "If you say, 'My niece is getting my RRSP [registered retirement savings plan] and my nephew is getting the rest of the estate,' well your nephew now has to pay the tax on what the niece got on the RRSPs."

In other words, "the estate is going to get the tax, so you have to make sure that's all co-ordinated," she said.

Another factor is probate fees, which is basically the provincial fee for handling the will and the estate. These vary by province, but are comparatively higher in Ontario at 1.5 per cent and in British Columbia at 1.4 per cent. A way to circumvent the fee is to set up joint ownership of the assets, in which the other owner automatically gets the assets, avoiding probate fees. But there are significant risks.

When one spouse dies, the assets simply pass to the remaining spouse who already had joint ownership. That's a fairly straight-forward process. But what if a parent, say, an aging widow or widower, decides they'd like to hold the home or other assets jointly with a grown child, not only to save fees, but also for convenience?

"If they have more than one child, and one child holds an asset jointly with them, then there's the whole question of whether that's supposed to be their joint account or their joint property, or was putting it in joint names just so that that child could help them out and help them run things?" Ms. Murray said.

It can become vague what the parent intended by setting up the joint ownership. This intention needs to be clearly documented. Was it done for convenience and to avoid taxes? Was the property just for this one child, or was it supposed to be shared with others in the family when the parent died?

Another pitfall is that this process can put the jointly held property or assets potentially at risk with creditors. What if that adult child runs into financial trouble, his business fails, or she goes through a divorce? "There's a question of whether the divorce might pull that parent's property into that whole equation, and that makes things more complicated," she said.

The misconception is that jointly holding property with an adult child diminishes the importance of a will. In fact, it does the opposite. It makes a will all that more important.

As Mr. McLellan in Vancouver noted, "there used to be what was called a presumption of advancement between a parent and a child, such that if there was a jointly owned piece of property where the child got their name on it, it could be a gift to that child. The Supreme Court reversed that, so now it is presumed that the child is holding it in trust for that parent's estate." And so documenting the parent's intention in a will is all the more important.

There's also one white elephant in the room these days in estate planning, more than mixed feelings about a kimono or grandmother's blanket. It's the soaring property values across Canada, which are central in piecing together estate planning, and have a major impact on whether or not to jointly hold the property with an adult child.

"If you own your principal residence, there is an exemption from tax on the capital gains on that. And certainly in Toronto and Vancouver, we've seen large increases in property value over the last few years," Mr. McLellan said. But "if that property was put in the name of a child, they are half owner. If they don't live there, half of that property has a capital gain to it that's taxable."

That can be a huge tax hit to the joint owner.

"Frankly, with increased property values, there's a lot to fight over. And the other thing that creates a lot of business for us is second marriages, blended families. It's amazing how people say, 'Oh well, I just trust my spouse to look after my kids.' It hardly ever works out that way," Mr. McLellan said.

"Sometimes it does, but it's amazing how much people trust other people without doing it [the planning] properly. I've had clients say they want to write a book about their family," he added.

Given family tensions, that's probably better done after making sure the planning is firmly in place.

More Canadians are giving money to family and charity while still alive
December 16, 2015
How your adult children might be affecting your retirement savings
August 23, 2015
Beyond the windfall: The art of making an inheritance last
April 5, 2013 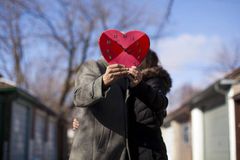