Since many Canadians are having children later in life, people in their 50s, who should be going great guns on saving for retirement, are instead sending their kids through college or university.

Pat Gillespie, owner of the retail store Carry Maternity in Toronto, had her first child in her mid-thirties. She and her husband Andrew, 59, also an entrepreneur, were much more concerned early on with career and purchasing a house, so they felt the children could come later.

The pair have a son, 20, attending college and a daughter, 17, in high school who will move on to postsecondary education.

“That’s how we found ourselves here,” says Ms. Gillespie. “We’re concerned about retirement but our kids aren’t self-sufficient yet.”

Despite planning for their children’s schooling with registered education savings plans (RESPs) since birth, they’re finding their savings and contributions for both education and retirement have slowed.

“What makes it difficult is that when you’re still growing a business, you don’t always generate the cash flow you’re expecting,” says Ms. Gillespie. “Partial retirement is becoming a much more realistic goal.” 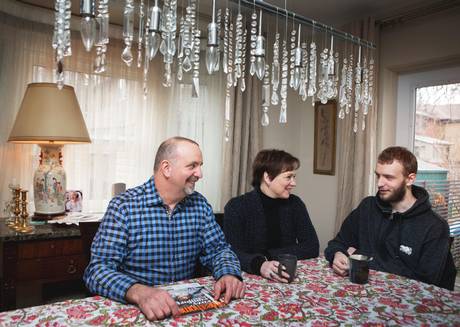 The Gillespies with their son Graham, who attends Humber College in Toronto. (Jennifer Roberts for The Globe and Mail)

Jennifer M., a 54-year-old self-employed single mom in Calgary, also feels caught between competing priorities. She has a daughter, 18, living away from home in her first year at university, and a son, 15, in high school who would like to attend Queen’s University in Kingston. She would like to retire by 60 and travel.

“Being self-employed is like an albatross around my neck,” says Jennifer, who asked that her last name not be used. “If the phone stopped ringing, I’d have to look at my savings very closely and figure it out.”

She tries to max out her contributions annually, depending on how successful a year she’s had. So far, her daughter hasn’t had to take out any student loans and takes responsibility for some of her expenses with money saved from a summer job.

The variability in Jennifer’s income, from $60,000 to $100,000, could certainly have her feeling the pressure, says Gordon Stockman, principal of Efficient Wealth Management Inc. in Mississauga.

However, since she had acquired many assets earlier in her life, he believes she has a good start on her retirement. If both her children go to university away from home, he estimates that the large RESP already in place is almost enough to pay for their education.

“Being self-employed is like an albatross around my neck.”
Jennifer M., Calgary

To build it further, he suggests that if Jennifer were to deposit the whole of the child support into the RESP until her son turns 18, it would be large enough for both children to study four years each at $15,000 a year.

For her retirement – based on a possible scenario of Jennifer earning $73,000 annually from her business – he calculates that if she were to transfer $13,500 each year from savings to her RRSP, save the child support to the RESP, and allow existing assets to grow without touching them, she would have enough wealth conservatively invested to last her 20 years (spending $60,000 per annum) from a retirement age of 60.

She would likely need to sell her current home before 80, however. Over all, he recommends that she spend less in retirement than she currently does – and many expenses will go away when she’s done helping the kids – or work until 65.

Adrian Mastracci, president of KCM Wealth Management Inc. in Vancouver, recommends that any family quantify the cost of education so they know how much they have to amass. Is the child going to Harvard or the local college? The key is knowing your goal.

“When people are in their 50s, there’s a lot of talk but not a lot of walk,” says Mr. Mastracci. “I congratulate Jennifer for having attended to investing, some retirement preparation and a healthy education fund for the children, all while being a single parent.”

He advises her to continue what she is doing, cost out the range of educational pursuits, be careful of investing risks, and develop a personal retirement plan. He suggests diversifying investments so they are spread out across Canada, the United States and globally.

Cherise Berman, principal at Bespoke Financial Consulting Inc., a fee-only planning firm in Toronto, advises that anyone self-employed, such as the Gillespies who both run their own business, have disability and critical illness insurance in place, in case they can’t continue working as planned in retirement.

While the Gillespies and Jennifer M. took advantage of the RESP to save for their children’s education and got the benefit of the tax-deferred income and government grants, Ms. Berman suggests other ways to minimize the cost of education for those who didn’t start an RESP for their children. Attending a local university or college can be a huge cost saver, she says. What works for some families is paying for residency for the first year only. After that, the child lives at home or self-funds the cost to live in residence.

Other options are government loans and a no- or low-interest loan from mom and dad. The loan can be paid back over time once the child is working, but if you’re better prepared for retirement than expected, you can also forgive the loan.

“Education doesn’t have to be 100-per-cent funded by you, especially, if it means putting your other priorities in jeopardy,” says Ms. Berman. “Encourage your child to work during the summer and set a reasonable expectation of what you expect them to save. If they can manage part-time work while in school, or if there’s a co-op program available, encourage that as well.

“By sharing costs, they’ll have accountability and responsibility. It may even make them better students if they see their own money paying for their education.”