Jobless in depressed Calgary, June, 62, and Jack, 55, are looking to her inheritance and her mortgage-free house to sustain them for the remainder of their years.

"We are in a more fortunate position (than some) in that we have very limited debt, all short-term on our credit card and paid off monthly," June writes in an e-mail. Jack is getting employment insurance, but that will run out in March. June is getting Canada Pension Plan survivor benefits and took early CPP last year.

Jack is now dealing with a medical situation which will require surgery and "he may never be able to work again," June writes. June had hoped her inheritance would be able to sustain them.

June's late husband had handled the money so she was grateful when an acquaintance, who worked for an insurance company, offered to help her invest.

"I know it was a bad move but I was desperate at the time," June says. "He has had our portfolio for 11 years now and I don't know how to evaluate if it's making the money it should be by now," she adds.

"How can I get an objective review of my portfolio and have my best interests – and not those of the adviser – placed first?" she asks.

We asked Warren MacKenzie, author and a principal at HighView Financial Group, a Toronto investment counselling firm, to look at June and Jack's situation. Mr. MacKenzie's most recent book is titled, Zen and the Art of Wealth.

June didn't know what questions to ask when a financial adviser, whom she considered a friend, offered to manage her investments, Mr. MacKenzie says.

What she needed was a financial plan that showed, among other things, the rate of return necessary to maintain her lifestyle. "She should have been put into a well-diversified, goal-based asset mix that was designed to earn the required rate of return," the planner says.

"What she got was an investment portfolio that included 24 different mutual funds, including high-fee segregated funds," Mr. MacKenzie says. "The portfolio is so overdiversified that she is almost guaranteed to underperform the benchmark indexes by the amount of the management fees, which are more than 2 per cent per annum," he says. Worse, "most all of her funds have deferred sales charges."

June was sold on the segregated funds because of their guarantee, Mr. MacKenzie says. The fund company guarantees investors will get 75 per cent of their money back after 10 years no matter how the financial markets perform.

"The guarantee is unnecessary because if she follows a disciplined rebalancing process and is in a well-diversified portfolio, it is unlikely that in 10 years' time the account would be less than the starting value," the planner says. June's adviser "is not adding value so it's time to move on."

June should contact several investment counsellors, robo-advisers (online portfolio managers) or investment advisers and ask to see a sample investment policy statement, Mr. MacKenzie says. (She can find a list of portfolio managers in her area on the Portfolio Management Association of Canada website, portfoliomanagement.org).

The investment policy statement should be written in such a way that she understands how the money will be managed and show the benchmarks against which performance will be measured, he says. She should ask to see a sample performance report that should show actual performance compared with the appropriate benchmarks.

"Then she should ask these advisers for an investment proposal," Mr. MacKenzie says.

June and Jack's living expenses are reasonable. "Given the size of their portfolio, they will not run out of money even if they earn a very low rate of return," Mr. MacKenzie says. They will need to dip into their savings in the early retirement years but their withdrawals will fall once they are both collecting CPP and Old Age Security benefits.

If they earn 2.5 per cent a year, the value of their portfolio will fall from $1,050,000 to about $850,000 by the time they are both collecting government benefits. If, in contrast, June is able to lower her investment fees and follow a disciplined investment process, she should be able to generate a 4.5-per-cent return. If she does this, the portfolio will not shrink between now and when they both begin collecting government benefits. By the time June is 90, she would have an additional $900,000 (compared with a 2.5 per cent return), an important cushion if she ever needed expensive health care, Mr. MacKenzie says.

The problem: Will their investments sustain them for the rest of their lives?

The plan: Dump the adviser and go shopping for one that will provide an investment policy statement and goal-based investment plan – measured against benchmarks – at a reasonable price.

Are you getting value from your adviser? Try Rob Carrick’s checklist
Subscriber content
February 25, 2021
Hidden health-care costs can be a shock for retirees
November 18, 2015 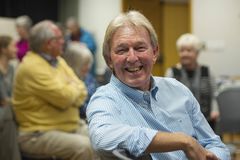 At start of big earning years, couple face lack of retirement savings
December 30, 2016
Follow us on Twitter @globeandmail Opens in a new window
Report an error Editorial code of conduct
Due to technical reasons, we have temporarily removed commenting from our articles. We hope to have this fixed soon. Thank you for your patience. If you are looking to give feedback on our new site, please send it along to feedback@globeandmail.com. If you want to write a letter to the editor, please forward to letters@globeandmail.com.
Comments