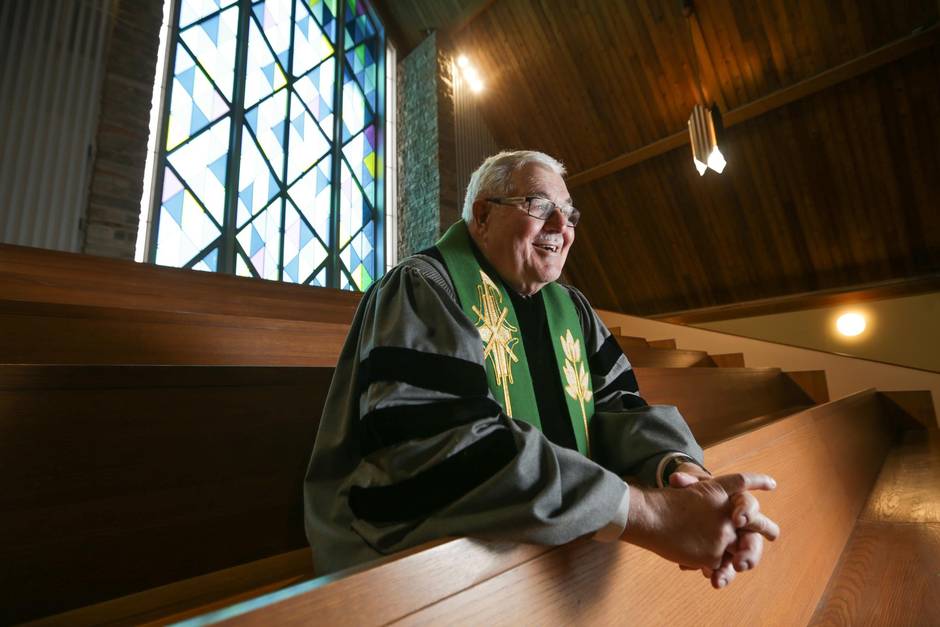 Rev. Pirie Mitchell after a recent Sunday service at Avondale United in Stratford, Ont. Mr. Mitchell became a United Church minister at 60 and now is almost 76. He is wrapping up an interim assignment where he helped to guide the merger of two United church congregations. (Glenn Lowson/The Globe and Mail)

This is the second in a Reflections series that features retirement-age Canadians. We ask them how their plans for this stage of their lives have played out.

At the age of 58, Pirie Mitchell was ready and able to leave a 25-year career in teaching with a full pension.

But early retirement from the classroom in 1999 simply gave him the freedom to pursue a boyhood ambition to become a United Church minister. Ordained at 60, Rev. Mitchell worked until age 71 when he wrapped up six years as a church minister in nearby St. Marys, Ont.

The retirement lasted one year. In 2012, he returned to work as an interim minister assigned by the United Church to help congregations facing challenges, such as declining membership. Now, after almost four years in Stratford to assist two churches successfully complete a merger, he heads to Palmerston, another southwestern Ontario parish, to work three days a week for the next two years.

“There has never been a moment when I said ‘I can’t wait to retire’ after I started the ministry,” says Mr. Mitchell, who turns 76 next month.

He credits his freedom to pursue a life-long ambition – at a stage in life when others would be retired – to decisions he took decades ago to build a nest egg on more than a teacher’s pension.

“Everyone thinks it is a gold-plated pension,” he says. “Yes, it is geared to inflation but things cost more.”

Mr. Mitchell talks to parishioners after Sunday service at in Stratford, Ont. His ‘put away for tomorrow’ philosophy gave him the freedom to retire as a teacher and pursue his second career as a minister. (Glenn Lowson/The Globe and Mail)

Mr. Pirie’s philosophy, which he describes as “put away for tomorrow,” only began in his mid-30s. Before that, he held a series of short-term jobs before graduating from what now is Concordia University. He landed a job in London, Ont., as the television host of a talent show for young people, later earning a teaching degree.

At 35, early in his classroom career, he began to make maximum annual contributions to his Registered Retirement Savings Plan, investing mainly in dividend-paying stocks and resisting the temptation to ride the ups and downs of the market. “I wasn’t buying and selling stock to get the capital gain,” he says. “I was getting the dividend and that is all I cared about.”

His stock broker shared his long-term view on investment. “There are financial deals [stocks] I should have bought,” Mr. Mitchell notes, dryly. “I only knew that after they went up.” He had little interest in safe, but lower-paying, options such as interest-bearing Guaranteed Investment Certificates. “Stay away from banks except to buy their shares,” he laughs.

While studying several years for the ministry at the University of Toronto’s Victoria University, and after the death of his first wife, Mr. Pirie drew on his teacher pension. As a student preacher in Hensall, Ont., he also received a stipend and church-paid housing.

Mr. Mitchell made other financial decisions in his 60s that later enriched his savings. For example, while earning a church salary, he deferred his Canada Pension Plan benefits until age 65 and chose not to draw on his church pension until age 71 when he transferred the funds, as required, to a Registered Retirement Income Fund.

He estimates his church pension, built up over 15 years, now is worth twice what it would have been had he dipped into it earlier.

“It doesn’t mean I squeeze every nickel that comes in my pocket,” he says of his savings focus. “I just think carefully about where I want to be,” he says.

He remarried 13 years ago, and describes his financial situation as “secure.”

He says, “I am never going to be a millionaire but we can live comfortably and I can do what I want to do and so can my wife. She has the same virtue.”

The couple is planning a holiday in Portugal, have a paid-off home and now are preparing to downsize to a smaller home in St. Marys. Between them, they have put five children (his and hers are between 28 and 37 years of age) through university. All the children, he adds proudly, are committed savers.

For those dreaming of a second career, Mr. Mitchell urges realism.

“You had better be sure your finances are in order,” he says. “There are lots of folks who think the [employer] pension is going to get them through, but the pension won’t give you three weeks in Aruba.”

He also counsels those nearing retirement to pursue attainable dreams. “If you want to be an astronaut at 55, it is doubtful,” he says. “Make sure it [the goal] is achievable.”

Couples, he emphasizes, should communicate with each other about their life goals and financial aspirations.

“Both of us were on the same page when we got married,” he says of his wife, Ruth, a long-time nurse who retired three years ago at 63 with her own pension. “It is easy if your partner is with you,” he adds. “If your partner is not with you, it is deadly.” 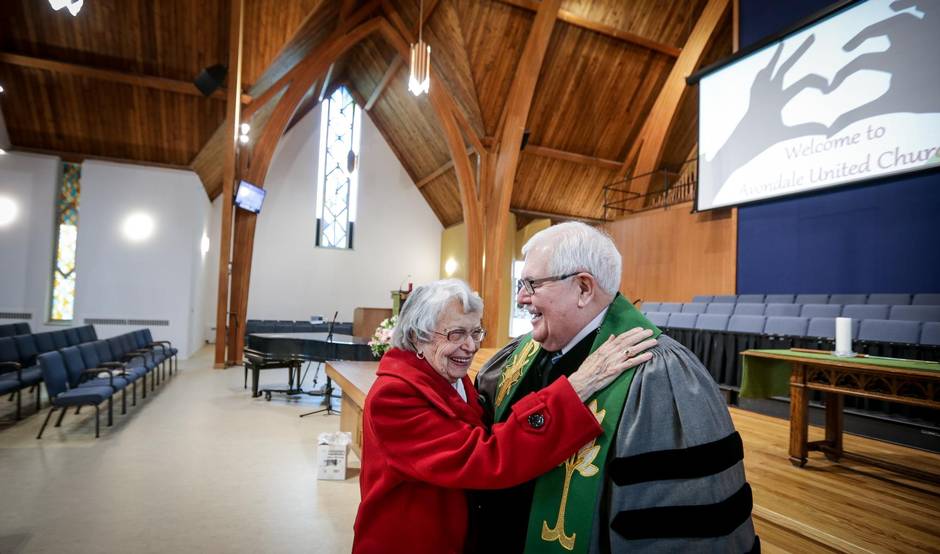 Mr. Mitchell says goodbye to parishioner Isabel Plant after a Sunday service at Stratford’s Avondale United, the last one he gave at the church. ‘Here is what I didn’t know at 55 – that when I began to do this [ministry work] how much I would love it,’ he says. (Glenn Lowson/The Globe and Mail)

Retirement is still not a word in the lexicon of Mr. Mitchell, who is about to embark on his fourth degree, a masters of theology.

Looking back on his choices, Mr. Mitchell sounds a little surprised at his continued joy in shunning the conventional road to retirement.

“Here is what I didn’t know at 55 – that when I began to do this [ministry work] how much I would love it,” he says. “I thought by the time I got to be 60 I would be so sick of it …but here I am jumping back in with another congregation.”

He adds with a smile: “I can’t wait to get started with them.”