Delaying CPP retirement benefits past age 65 is the right thing to do for a lot of people.

Almost everybody ignores this guidance, and that's a problem for the federal government.

This week, an economic advisory panel urged the government to raise the age of eligibility for both the Canada Pension Plan and Old Age Security. Doing so would help our economy remain productive by keeping seniors working, and ease stresses on government finances.

Related: How to turn your RRSP into a retirement cash-generating machine

The government could also increase existing incentives for taking CPP and OAS later than age 65, or better publicize the existing enticements. The voluntary approach doesn't look promising, though. While Canadians are increasingly working longer, they've shown a remarkable lack of interest in delaying their CPP retirement benefits.

Several years ago, the federal government made it much easier for people to start collecting CPP before 65 without having to leave the work force. But at the same time, it increased penalties for starting CPP as early as 60 and improved incentives for delaying as late as 70. The net result is that huge numbers of people are starting their CPP retirement benefit early. "People just want it ASAP," said Fred Vettese, chief actuary at the benefits consulting firm Morneau Shepell.

Some of the people taking benefits early – or even on time – are making a mistake. They would do better to wait for enhanced monthly benefits that will pay them more money overall if they live even a modestly long life by current standards. But publicly available data on the CPP suggest this message is lost on most people.

The numbers show that a total of 311,737 people started their CPP retirement benefits in 2015, almost two-thirds of them before age 65. Just 5.7 per cent of people who started their CPP payments in 2015 did so at age 66 and older. This has been the typical pattern for years. Why? Mr. Vettese has a few theories:

– People think they're going to die young and leave money on the table: "The odds of dying young are actually very small," he said. "A woman aged 65 has a less than 10-per-cent chance of dying before 80. The odds are that she is going to live well beyond 80, and maybe well beyond 90."

– People think the CPP may not be around, so they should get the money while they can: This view reflects a common worry prior to CPP reforms in 1997, which put the plan on a much more solid footing. "For me, as an actuary, I have zero concern that the CPP will run out."

– A lack of savings: Mr. Vettese said a lot of people haven't saved enough, they're not keen on working anymore and so they start CPP early.

– Investment advisers quietly encourage it: Mr. Vettese has heard anecdotes from clients advisers are discouraging people from waiting to get their government retirement benefits. Dipping into your investments while you wait until your benefits kick in at age 70 would reduce remuneration to advisers who charge fees set as a percentage of a client's account value.

The reduction in taking CPP early instead of at age 65 can be as much as 36 per cent if you start at 60, while the increase from deferring your pension tops out at 42 per cent if you wait until age 70. Mr. Vettese said only about 1 per cent of people take CPP at age 70, and he thinks a good number of those doing so simply forgot to apply for benefits earlier.

There are incentives for delaying OAS as late as age 70 rather than at 65, but Mr. Vettese said they're not as attractive as they are for the CPP. Regardless, Canadians have demonstrated a preference for scooping up their retirement benefits as soon as possible.

Taking benefits early makes sense if you don't expect to live a long life. But, overall, Mr. Vettese can't understand the preference for early benefits. He said two things people are particularly worried about in retirement are their health and the risk of outliving their money. Waiting to collect CPP benefits until age 70 helps address the money fear. "I don't know why people wouldn't do it."

The new way to tell if you’ve saved enough for retirement
February 5, 2017 Turning savings into income: A practical guide to RRIFs
January 27, 2017 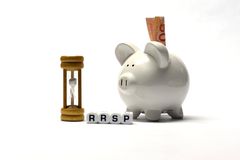 Pay down the mortgage or invest?
Subscriber content
February 2, 2017
Follow Rob Carrick on Twitter @rcarrick
Report an error Editorial code of conduct
Due to technical reasons, we have temporarily removed commenting from our articles. We hope to have this fixed soon. Thank you for your patience. If you are looking to give feedback on our new site, please send it along to feedback@globeandmail.com. If you want to write a letter to the editor, please forward to letters@globeandmail.com.
Comments