Canadians are looking more toward international opportunities in hopes of boosting returns in retirement portfolios, according to a new investor poll.

Forty-one per cent of Canadians who are investing for retirement in stocks or mutual funds say they are looking for opportunities outside of Canada, up from 31 per cent last year, according to a CIBC poll released Wednesday.

"Canada accounts for only about 3 per cent of the world's market capitalization, so diversifying geographically can strengthen your portfolio for the long-term," said Luc de la Durantaye, managing director of asset allocation and currency management at CIBC Asset Management. "It significantly broadens your investment options and helps to mitigate risk."

Despite the lower loonie and declining oil prices, Mr. de la Durantaye said it doesn't necessarily mean Canadian investors should be looking at re-entering the Canadian market just yet.

"There are some fundamental challenges in the global economy that still make Canadian investing not necessarily the outstanding performer going forward," he said. "Oil prices are eventually going to bottom out, but it doesn't mean oil prices are going to go back to $100."

The online poll of about a thousand Canadian investors was conducted at the end of January.

Over the past 15 years, four different equity markets around the world posted the best annual returns. Canada's benchmark S&P/TSX composite index didn't top the list once during that period. Last year, Japan's Nikkei was the top performer, rising 9.2 per cent, while the U.S. Standard & Poor's 500 index ranked first in 2014, returning 13.7 per cent.

But the lower loonie is now making it more expensive to tap into international markets, said Craig Alexander, vice-president of economic analysis at the C.D. Howe Institute.

"Most retail investors tend to wait too long to invest abroad during volatile markets – because they turn defensive and in turn miss many of the great days in the marketplace," Mr. Alexander said.

"In terms of Canadians doing more international investing now, the big move in the currency is behind us, and there is still some debate whether the Federal Reserve is going to raise rates – so the downside to the Canadian dollar is likely limited."

Patrice Quirion, a global portfolio manager at Fidelity Investments, cautions investors about being late to the party when deciding where to put their investment dollars.

"Many retail investors have a tendency to look in the rear-view mirror to see where they should have been over the past few years – instead of looking forward to where they should be going," said Mr. Quirion, who manages the Fidelity Global Concentrated Equity Fund. "As a result they tend to go to the wrong place at the wrong time."

Despite feeling slightly better about the Canadian market than he has in recent years, Mr. Quirion continues to diversify with exposure in both European and emerging markets.

"Investors need to be aware that the U.S. dollar is approaching pretty good levels of strength and that could result – from a mid- to long-term perspective – in the possibility of the U.S. dollar weakening instead of appreciating like it has over the past five years," Mr. Quirion said. "Therefore, there is a bit of caution of putting too much of your investment egg into the U.S basket – from a currency prospective. There could be other markets … where investors will want to look – such as the euro, which has only strengthened by 4 per cent since 2013 versus the U.S dollar, which appreciated 33 per cent."

"If every Canadian had been well diversified in the last few years, then their portfolios would have done relatively well," Mr. de la Durantaye said.

"With resources and financials the two biggest weights in Canada's equity markets, it's important that investors diversify their holdings both geographically and between asset classes to help them with their long-term goals."

Global economic realities being ignored amid all this market turmoil
February 11, 2016 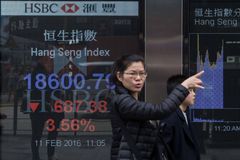