Shareholders of Research in Motion are aiming their disappointment and anger at the company's most senior directors, reflecting a mounting sense that the BlackBerry maker's board did not act quickly and boldly enough to arrest the company's downward spiral.

On a day when the share price dropped again, scraping new lows after more than a year of declines, hundreds of shareholders gathered at the company's annual meeting armed with a stark message: Replacing its long-time co-CEOs, making drastic changes at the top levels of management and laying off nearly one-third of its workforce as it restructures may not be enough.

The hour-long presentation, followed by a tense question-and-answer period, came almost a year after former CEO Jim Balsillie hosted a relatively timid meeting: At the time, the stock was valued around $27.

On Tuesday, RIM's shares opened at $7.91 but dropped another 47 cents. The company announced it had sold a private jet as part of an effort to trim $1-billion in operating costs this fiscal year. Inside the annual general meeting, investors expressed shrinking confidence in the board's oversight when it came time to re-elect the directors. The number of votes withheld – the only way to register discontent when there are no alternative candidates – was double, triple and in some cases nearly quadruple the number withheld last year.

Chief executive Thorsten Heins faced questions from shareholders about his competence and compensation, but investors saved their harshest criticism for the board – still composed mainly of people chosen under the previous management regime. One angry shareholder, who expressed confidence in Mr. Heins and wished him good luck, nevertheless said the board had let things get "out of hand," and called for an overhaul like the one that recently took place at Canadian Pacific – where activist investor Bill Ackman turfed some establishment directors in a prolonged proxy battle and brought in a new CEO, Hunter Harrison, from a rival railway.

Among the critics were long-time individual investors and members of investment clubs, but they also included larger institutional shareholders such as Jaguar Financial CEO Vic Alboini, who has been a vocal critic of RIM's board for lacking expertise in technology and consumer marketing.

Commenting on the outcome of the re-election vote, Garfield Emerson, a former chairman of Rogers Communications Inc. for more than a decade and a current director of Canadian Tire Corp., said the "significant" number of voters who withheld their vote sends a strong message.

"The shareholders want a new board," he said.

The numbers are even more notable, Mr. Emerson said, because former co-CEOs Mike Lazaridis and Mr. Balsillie, as well as new RIM director Prem Watsa, own about 15 per cent of RIM's shares.

The RIM board has long been criticized as being toothless, since Mr. Lazaridis and Mr. Balsillie dominated it for so long as co-chairs, in addition to serving as co-CEOs. Since then, the board has shifted only slightly as RIM lost huge market share to Apple Inc.'s iPhone and devices running Google Inc.'s Android software.

Ms. Stymiest, already a director, became chair in January when RIM underwent the biggest management shakeup in its history. But with the exception of Mr. Heins taking a directorship, and the addition of consultant Claudia Kotchka last July and of former Goldman Sachs executive Timothy Dattels recently, there has been little in the way of dramatic change. Facing criticism at the AGM on Tuesday, Ms. Stymiest acknowledged the board has "gaps" and that it has enlisted a search firm to help "augment" the board's expertise in certain areas.

"The board heard shareholders loud and clear," Ms. Stymiest said in an e-mailed statement emphasizing the changes made already, after declining an interview. "The board is always considering potential new directors and the process continues."

In contrast to many other public company annual meetings, RIM did not allow its executives and directors to mingle with the crowd over coffee and refreshments. Shareholders were kept from their seats until only a few minutes before the event began, the event ended promptly, and despite the odd joke from Mr. Heins – who got laughs by offering to replace somebody's faulty BlackBerry PlayBook tablet – most of the comments received relatively curt replies. The shareholder who said the company needed to undergo a transition like at CP was asked by Ms. Stymiest if he had a question.

Away from the microphones, however, there was more optimism. Many local shareholders, who have seen the shares decline steeply in recent months, are hoping that RIM can fix its shaky situation – not just for the price of their shares, but for the sake of their community. Lifelong area resident Carole Frankow, a senior who attended the AGM for her investment club, said the former co-CEOs stayed too long and that the delay of RIM's next-generation operating system, BlackBerry 10, was particularly dispiriting.

After a briefing on the company's plans from Mr. Heins, some shareholders emerged from the meeting optimistic. "I feel confident coming out of there," shareholder Marion Rahn said. "A lot of people weren't, but I did. They've got a lot in the works."

Others came out of the meeting "lukewarm," as investor Talmage Adams described it. He thinks RIM has solid strengths, particularly the BlackBerry's widespread use among corporations. But Mr. Adams, who jokingly praised the company for not offering coffee to shareholders as part of its cost-cutting program, is uncertain about the future.

"Management has articulated a strategy, but I'm not sure it's focused enough," Mr. Adams said after the AGM ended.

"I'd like to know that they're going ... to really pursue areas of strength, where they are market leaders and get high margins." 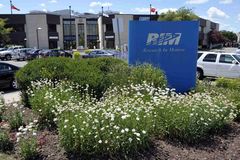 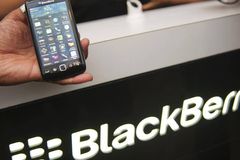 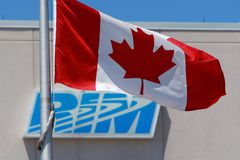 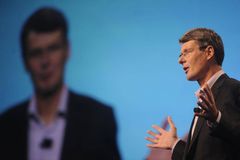