One side was struggling under a heavy debt load, strapped for cash and searching for new partners. The other was smarting from a high-profile loss against China.

And so, weeks after state-owned Korean National Oil Co. was the loser in a bidding war for Addax Petroleum Corp. in the summer, it began takeover negotiations with Harvest Energy Trust .

Those talks ended late Tuesday, in a deal that will mark South Korea's biggest foreign energy purchase and another step forward in its bid to export Canadian petroleum resources to Asia.

KNOC agreed to pay $1.8-billion or $10 a unit for Harvest Energy, in a cash deal whose hefty premium serves as another indication of the strong global interest in Canada's oil patch.

It comes less than two months after PetroChina agreed to pay $1.9-billion for a majority share in two Athabasca Oil Sands Corp. projects, and has raised concerns about the growing ownership of Canada's oil patch by state-owned companies.

KNOC has already picked up a small corner of Canada's oil sands, and a company official said Wednesday that it hopes to ship Alberta bitumen to South Korean refineries. Such a move would mark a further progression in the country's plans to more than quadruple its current production to 300,000 barrels a day by 2012, a goal born of concern over energy security and a bid to move resources from the U.S. dollar into commodities.

In the past few months, the South Korean firm has either bought property or explored for oil in Peru, the U.S. Gulf Coast and northeastern Iraq.

The Harvest deal, which must be approved by unitholders and governments in Canada and South Korea, will double KNOC's oil output.

For Harvest, the rationale was simple: South Korea had money. Harvest, which is based in Calgary and produces just over 50,000 barrels a day of oil equivalent, did not.

A victim of low commodity prices and the credit crunch, Harvest slashed its annual distributions from about $550-million to $100-million in March, and had been casting about for a way forward. Its plans to bring in a partner to help pay for a $2-billion expansion of its Newfoundland refinery had crashed into the credit wall last year.

Though it succeeded in raising $120-million in new equity in June, that was far from enough. Harvest needed to spend $250-million this year just to maintain its current oil flow. It only had the cash to spend $170-million. The markets noticed, and discounted the company's stock. CEO John Zahary was looking at extending the company's borrowing, and contemplated selling assets. "We knew we had to look at our capitalization and see what was the best way to move forward."

So when KNOC came in with its offer - which totals $4.1-billion once assumed debt is factored in - Harvest couldn't refuse the 47 per cent premium over its previous 30-day average. KNOC has told Harvest it intends to boost the company's capital spending, maintain its assets - including its Newfoundland refinery - and hold on to its 1,000 staff and management.

"At the end of the day, the premium to the trading price, and the certainty - the fact that it was an all-cash transaction - was so compelling I think the board was obliged to present it to the unitholders," said chairman Bruce Chernoff.

Expectations that further deals may be coming boosted shares at Provident Energy, Penn West and Enterra.

KNOC has yet to produce any oil in Canada, although it hopes to receive environmental approval for the first 10,000 barrel-a-day phase of its already-purchased BlackGold project by year's end. It has supported, although not invested in, Enbridge Inc.'s Gateway pipeline project, which proposes to transport crude from the oil sands to the West Coast for offshore shipping. KNOC sees that pipe as a way to lessen its dependency on Middle Eastern oil, said Byeong-il Kim, the administration and finance manager of the nine-person KNOC Canada.

Buying Harvest will give KNOC access to another one billion barrels of oil sands bitumen. Although that land is not close enough to BlackGold to develop together, if the company can figure out how to profit from the oil sands, it is in a position to buy more, said Tom Grieder, an energy analyst with IHS Global Insight. "KNOC is interested to go there and build its technical expertise," he said. "If this is working out and it is making money there, then perhaps it will buy other assets in Canada."

Still, the deal has stoked worry that the Canadian government will eventually step in to block transactions like it, after watching other parts of its oil patch go to other state-owned companies. However, Mr. Zahary said he believes the South Korean commitment to boost spending will win Canadian favour.

"We see this as an opportunity for increased jobs in the country, increased capital investment in the assets," he said. "Ultimately, I think that's good for all Canadians." 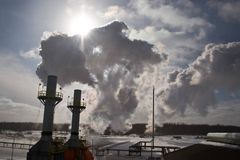