Staples Inc. on Tuesday chalked out plans to cut costs and grow in a struggling economy but the changes fell short of analyst expectations and sent its shares down as much as 7.6 per cent.

It plans to close 30 stores in North America, downsize 30 more and take a pretax charge of up to $1.12-billion (U.S.) as it works on building its online sales and mobile units, among other initiatives.

Staples expects the cost cuts to save about $250-million a year by the end of fiscal 2015.

The No. 1 U.S. office supply retailer has been struggling with depressed demand from consumers and businesses and recently pledged to make broad changes. Many investors look at office supply retailers as a barometer of economic health because demand for their products is closely tied to white-collar employment rates.

Analysts said Staples had long hinted at some kind of revamp in the pipeline, but some think the retailer has too many problems to hope for a quick turnaround.

Citigroup analyst Kate McShane said while the plan addresses some important issues, the announcement was "disappointing" because "we don't think it's enough to combat the secular challenges the company is facing."

She said the plan also lacks details on how sales and profit will be affected.

Staples and smaller rivals Office Depot Inc. and OfficeMax Inc. have been looking for ways to reduce costs and increase sales while corporate customers and other shoppers reduce discretionary spending.

The chains also face competition from discounters such as Wal-Mart Stores Inc. and online retailer Amazon.com Inc., which can sell the same or similar products at cheaper prices.

The pretax charges of up to $1.12-billion largely include writing down the value of assets in Europe and the cost of closing stores in the United States.

Staples said on Tuesday it would reduce retail square footage in North America by about 15 per cent by the end of fiscal 2015, including closing about 15 U.S. stores. That will result in a pretax cash charge of about $35-million for its fiscal fourth quarter, which ends in January.

The company expects to close some 30 stores in North America, while it also scales down or relocates 30 more by the end of the fiscal year.

Staples said it will close 45 stores in Europe by the end of 2012. The company also named John Wilson president of Staples Europe. He succeeds Rob Vale, who is retiring, as planned, after heading the European operations for three years.

As a result of the international changes, Staples will take pretax cash charges of $145-million to $195-million by the end of 2012, while also looking for "additional operational and strategic opportunities for its European operations."

As it shrinks bricks-and-mortar operations, Staples is uniting its U.S. retail and Staples.com businesses and increasing investment in online and mobile units.

One analyst was underwhelmed by the strategy. "They are paying around $200-million in cash to get $250-million in savings three years out. I think that keeps the market reaction muted," said Scott Tilghman, an analyst with Caris & Company. Mr. Tilgham said the plans outlined by Staples were "largely in line" with his expectations.

Other analysts said the moves, which were largely expected to some extent, lacked positive surprises. "Investors were likely hoping for bigger cuts to European Retail, plus a larger scale cost reduction in North America," Bernstein Research analysts wrote in a note. "The company's stated intention to invest in online/mobile and other categories to drive growth suggest the bottom-line impact will be muted."

Framingham, Mass.-based Staples had its initial public offering on April 27, 1989, and now has about 2,290 stores around the world.

In a Wall Street Journal opinion piece published on Aug. 23, "What I Learned at Bain Capital," Mr. Romney cited Staples as a success story in the opening sentence. He added that it was "one of many businesses we helped create and expand at Bain Capital." 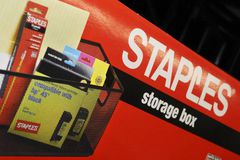 In a bind: Staples caught in struggling industry
June 11, 2012 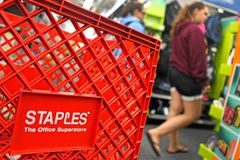 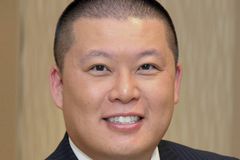