Lululemon said late Monday it had recalled batches of its stretchy black signature yoga pants because of an unacceptable "level of sheerness" created during the manufacturing process.

Eclat Textile Co. Ltd., a supplier for Lululemon for about nine years, told Reuters that "a gap between Lululemon's expectations and reaction from the market" was the cause of the problem.

"We checked our orders this morning and indeed, we did follow their instructions to make the product," said Roger Lo, a spokesperson for Eclat. "Lulu has some new ideas every year, such as taking different approaches for fashion-related purposes."

"Lululemon introduced the product to the market and their customers are not comfortable with its opacity."

Mr. Lo said Lululemon had not contacted Eclat regarding the issue, but Eclat was willing to adjust production according to the retailer's needs. He said any changes would not be due to quality issues.

Lululemon's shares tumbled more than 5 per cent in morning trading Tuesday on the Toronto Stock Exchange after analysts downgraded the stock and lowered their estimates, although the stock bounced back later in the day to end the session down just 2.6 per cent.

Lululemon has been hit with other snags, particularly a glitch with its dyes last year that caused the colours to run into one another, prompting complaints from customers who had bought the retailer's brightly coloured athletic clothing.

Now some analysts are pointing to a pattern of product issues at Lululemon as it grapples with managing rapid expansion and strong customer demand.

"We would proceed with caution on the name, until quality issues are contained and remedied," said analyst John Morris at BMO Nesbitt Burns, who lowered his earnings-per-share estimate for the first quarter and 2013 to 41 cents (U.S.) and $2.24, respectively, from 44 cents and $2.30.

Jennifer Black, president of Jennifer Black & Associates of Lake Oswego, Ore., recommended that investors sell their shares, a turnaround for the analyst who had previously been a big fan of the retailer.

"We question the level of quality controls," Ms. Black wrote in a note Tuesday. "We find it hard to understand how a problem of this magnitude was not detected during wear testing and inspection. We also wonder if the quality control team is separate from the supply chain team."

Late Monday, Vancouver-based Lululemon disclosed that production of its popular black "luon" women's yoga pants had run into technical difficulties. The pants that made it to store shelves after March 1 were thinner than usual – "a level of sheerness … that falls short of our very high standards."

The company has pulled the items, which make up about 17 per cent of all women's pants sold in its more than 200 stores. The move is expected to have "a significant impact on our financial results," the company said.

Lululemon downgraded its outlook for its first-quarter results. The company now expects revenue of between $333-million and $343-million, down from $350-million and $355-million. It dropped its same-store sales guidance, for outlets open a year or more – a crucial measure of retail health – to an increase of between 5 and 8 per cent, rather than 11 per cent.

Christine Day, Lululemon chief executive officer, said in a statement on Monday that the retailer's first priority is to protect the quality of its fabrics to keep customers' loyalty. "We will accept nothing less than the very highest quality we are known for."

The company will provide details about the effect the problems will have on Lululemon's bottom line in 2013 on Thursday when it reports its fourth-quarter results.

Camilo Lyon, analyst at Canaccord Genuity, reduced estimates and his stock-price target on Lululemon, but kept his "buy" recommendation.

Despite his disappointment with yet another lapse at the retailer, Mr. Lyon said he believes the latest problems are transitory. "That said, the time needed to remedy the issues is at question. For now, we assume product shortfall through [the second quarter], implying near-term downside to the stock." 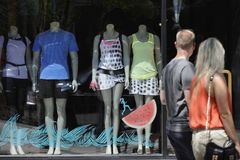 At the open: Indexes inch up, Lululemon takes tumble
March 19, 2013 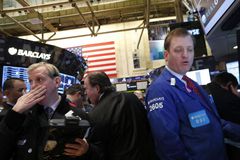 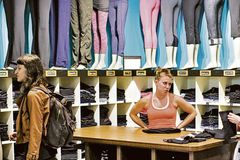 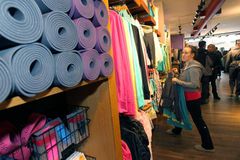