Europe is having its problems, lately. Greece is experiencing a fiscal crisis that requires a bailout from the International Monetary Fund. And credit-rating agencies are downgrading the sovereign debt of peripheral members of the European Union.

There is even talk that the EU and the euro might not survive. Skeptics say the differences are too great between members, and the Greek crisis has exposed reluctance on the part of Germany and other EU leaders to come to the rescue of other members.

Yet, a book published in March argues that investors should increase exposure to European stocks. Its title: Invest in Europe Now! Why Europe's Markets Will Outperform the U.S. in the Coming Years (published by John Wiley & Sons).

The authors are David R. Kotok and Vincenzo Sciarretta. Mr. Kotok describes himself as "the only Europhile in the U.S." He is the chairman and chief investment officer of New Jersey-based Cumberland Advisors, a money management firm with over $1-billion (U.S.) under management. Mr. Sciarretta is a financial journalist in Italy and author of the investment website www.yeswetrade.com.

The book has three parts. The first is about the longer-term, macro trends favouring Europe. The second discusses how to invest in Europe, focusing on the use of exchange-traded funds (ETFs). The third contains a collection of interviews with "investment gurus" such as Marc Faber, Mark Mobius and Ed Yardeni.

In the first section on macro issues, the authors and several gurus argue that Europe is moving toward a more investor-friendly environment while the U.S. is moving away. Factors to consider include:

-the European Central Bank is more focused on controlling inflation and maintaining the value of the currency;

- government deficits are not as high when compared to GDP, and EU membership imposes greater fiscal discipline;

- Europeans save more, and are less financially strapped;

- Europe is a net exporter;

- corporate taxes are lower in Europe;

- European politics are moving to the right (if Britain votes the Labour Party out of office in the elections this summer - as seems likely - most of the top six European countries will have centre-right governments).

One of the main arguments for preferring European stocks is undervaluation. Currently, European price-to-earnings ratios are about 75 per cent of U.S. ratios. Relative valuation over the decades has oscillated between 60 and 130 per cent.

"When Europe is selling at a deep discount from the United States, the odds are historically high that, sooner or later, it will outperform its American counterpart, diminishing the valuation gap," write Mr. Kotok and Mr. Sciarretta in their book.

European dividends are more substantial, too. On average, the yields are 30 to 50 per cent better. The authors add that European companies' greater focus on paying dividends "is a tangible sign that earnings do not live only in the gymnastics of accounting wizards."

For foreign investors looking to raise exposure to European stocks, valuations have only improved as the crisis in Greece weighs on the euro. Over the past 12 months, the Canadian dollar has gained about 20 per cent more purchasing power, with over half of the increase coming in the last three months.

In the book, Ken Fisher, founder, chairman and CEO of Fisher Investments, explains why he is overweight Europe. During the last half of the global bear market, Europe got hammered much worse - and history shows, according to Mr. Fisher, that the hardest-hit sectors go on to outperform over the first two or three years of the ensuing bull market.

Another of the gurus interviewed in the book, Felix Zulauf, president of Zulauf Asset Management in Switzerland, recently spoke to Mr. Sciarretta and explained why the EU and the euro will survive. Yes, Greece "has to default at some point," and the "European banking system would suffer another major blow," he conceded.

But EU policy makers will make financial resources available to contain the damage. Furthermore, Greece will be allowed to exit the EU and adopt its own currency, which will then be set low enough to boost exports and turn around its economy.

In an interview, Mr. Kotok says he is betting on the EU surviving if only because the members understand what is at stake if the union fails: a possible return to their "thousand-year history of conflict." And he is hopeful that Greece will remain a member given the precedents of Ireland and Latvia in dealing with their economic problems.

There are many ETFs that track European stocks. Buying those listed in the U.S has the advantage of lower fees and greater liquidity. And those without currency hedging will give Canadians exposure to the euro.

The Vanguard European ETF provides one of the broadest exposures and charges a rock-bottom annual expense of 0.18 per cent. The iShares MSCI EMU Index Fund covers just the 16-member nations of the EU And the SPDR Dow Jones EURO STOXX 50 tracks the 50 largest companies.

There are also several ETFs that track individual European countries. It would appear one of the better ones to consider is the iShares MSCI Germany Index Fund. At least Mr. Sciarretta would agree.

German stocks are at the top of his buy list. He likes the fact that the German economy is quite competitive thanks to the engineering know-how of its workforce and a 17-per-cent decline in unit labour costs relative to major trading partners since 1995, according to a study by BCA Research.

Furthermore, the decline in the euro linked to the Greek crisis has given the country even more of a competitive edge. "Germany used to be the champion of exports when the euro was at $1.60 (U.S.). Can you imagine what happens at $1.35?" Mr. Sciarretta asks.

Germany also appears to have experienced relatively less of the financial excesses still plaguing many other countries. "First, Germany never had a boom in real estate. Second, the household savings rate is high. Finally, the structural fiscal deficit is lower than elsewhere," observes Mr. Sciarretta.

Moreover, "Germany's stocks are cheap." He cites a research report by HSBC Bank that examined the valuations of the major international stock markets (after adjusting for sector weightings) and found German stocks were "the sixth cheapest market around."

That undervaluation hasn't changed much since the report appeared.

Another indication of undervaluation, says Mr. Sciarretta, is the relative weighting of U.S. and Germany in the MSCI All Country World Index. The U.S. accounts for over 40 per cent while Germany is just 3.4 per cent. "Germany will rise," he declares. 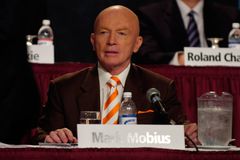