Enbridge shut down a third pipeline over a possible leak, amid growing concerns that Canada's energy producers will be forced to cut output as dwindling transportation options create a domestic supply glut.

Four days after a pipeline ruptured in an Illinois industrial park, spilling 6,100 barrels, Enbridge on Monday halted crude flowing through Line 10, a small, 150-kilometre pipe that can carry up to 70,000 barrels a day between Westover, Ont. and Kiantone, N.Y.

A spokesman said the company is investigating "a potential very small leak" in a Buffalo, N.Y. suburb, and no cause has yet been determined.

The outage is another blow to Enbridge, whose multiple pipeline shutdowns have triggered a substantial tumble in prices for Canadian crude as local inventories quickly build up. Producers now risk having to cut back their output as Enbridge struggles to restart its shuttered lines.

The spills have also increased the pressure on Canada's oil patch, which is already facing growing U.S. concern about both the safety of the energy industry and the environmental record of the oil sands.

Enbridge shut a U.S. pipeline in July after oil leaked into a Michigan river system. Then last Thursday, the rupture of Enbridge's Line 6A in Romeoville, Ill., led to another shutdown, removing from service a pipe capable of carrying 670,000 barrels a day, equivalent to one quarter of Canada's oil production.

Enbridge said on Monday that Line 6A suffered "damage," an apparent confirmation of statements by local officials that the rupture was caused by a rock, and not any internal pipe problem, such as corrosion.

That, analysts said, was a good sign for Enbridge since it could help the company prove to authorities that the leak was the result of an external accident rather than more pervasive problems with its maintenance program. That, in turn, could help it speed regulatory approval of a return to operation.

But Enbridge said it cannot estimate when it may be able to reopen the line, adding to the havoc in Alberta's oil patch, which is now scrambling to find alternative pipelines to carry its crude. The industry is already facing a sharp hit to profits from the outages.

The Enbridge problems have led to a backup of supply in Canada and slashed nearly $15 (U.S.) a barrel from the price of heavy crude, a figure that grew by $2.45 on Monday. UBS Securities suggests the lower prices will trim industry per-share cash flow by a minimum of 5 to 10 per cent in the third quarter. A broad spectrum of companies are affected, including Canadian Natural Resources Ltd., Suncor Energy Inc., Cenovus Energy Inc. and Imperial Oil Ltd.

And the impact could be substantially worse, as storage terminals reach capacity and other pipelines become too full to carry anything more.

"If it lasts for more than a week or two, it could end up being a bigger issue," said Kam Sandhar, an analyst with Peters & Co. "Some operators may end up having to shut in production for a period of time."

On Monday, Suncor said it has not yet cut output, while Nexen Inc., which has previously admitted to trouble moving its crude, said it has not had to significantly adjust production.

"But the real issue now is [that industry is]waiting for more information to see how long it's going to last," said Pierre Alvarez, Nexen vice-president of corporate relations. "We're hoping it doesn't go on for long because clearly that is a lot of production."

If U.S. authorities treat the second Enbridge spill as part of a systemic problem, it could lead to a substantial delay, analysts fear.

Yet others believe that the pain may be shorter-lived, especially if the shutdown creates gasoline shortages and sustained high prices, which may create political pressure to restart crude shipments, especially ahead of looming mid-term elections.

Kinder Morgan Canada, for example, runs the Trans Mountain line to the Canadian West Coast, the Platte line from Casper, Wyo., to Wood River, Ill., and the Express line from Hardisty, Alta., to Wyoming, Utah and Colorado. It's begun taking calls from companies looking to send barrels down those lines.

"Producers are looking for every avenue out of Alberta," said Kinder Morgan Canada president Ian Anderson. "Storage in Alberta is going to be, we estimate, chock-a-block full within days, if it's not already."

But Trans Mountain is completely full, as is Platte. That leaves only Express, which has about 70,000 barrels a day of spare room - and areas served by Express have little spare refining capacity, Mr. Anderson said. 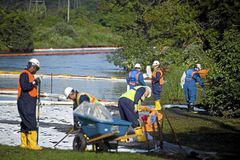 Enbridge suffers another pipeline breach
May 2, 2018 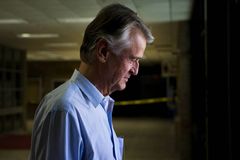 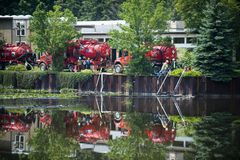