A blockchain company, a battery-metal explorer and a pot grower are among 13 Canadian companies being flagged by OTC Markets Group under a new system to warn investors about stock promotions.

“Anonymous, paid stock promotion should have no place in the public markets,” R. Cromwell Coulson, chief executive officer of OTC Markets Group, which lists 10,000 companies on its exchange, said in a statement Wednesday. “We continue to work with regulators to advocate for the modernization of promotion regulations, including requiring additional disclosure around paid stock promotion and identifying the people associated with these campaigns.”

The U.S. over-the-counter exchange said it will begin placing a megaphone icon beside companies that are the subject of promotions in an effort to protect investors. Fifty-six companies display the promotion warning as of today.

Paid promotions aren’t illegal in Canada or the U.S., as long as they are properly disclosed to investors and don’t contain false information. In practice, disclaimers are often hard to spot, especially when intermediaries are involved. Promotions typically mimic legitimate news articles.

Because promoters are often based outside the U.S. and promotions are published online or sent to investors by text or email, they’re difficult to regulate. In a worst-case scenario, when insiders cash out at the market peak on news that turns out to be hype, they can be classic pump-and-dumps.

The U.S. Securities and Exchange Commission pays attention to bad actors in this area. Last year, the regulator sued 27 individuals and their companies for their involvement in bogus stock promotions that appeared on SeekingAlpha.com and elsewhere.

OTC Markets is also placing a shell icon beside securities it believes may be shell companies, as defined by SEC rules.

The 13 Canadian companies that received OTC megaphones are:

None of them immediately provided a comment on the OTC decision, except Affinor, whose CEO Nick Brusatore said the firm isn’t concerned by the policy as his company is “promoting something and telling the truth.” Last year, Lexington Biosciences was asked by OTC Markets to explain its stock promotions. At the time, it said it didn’t pay for or review the materials.

In Canada, easy listing rules on the country’s junior exchanges -- including the use of zombie shell companies that provide access via reverse takeovers -- have led to spectacular rallies in hot commodities like bitcoin, marijuana and metals used for electric vehicles. Paid stock promotion is often part of the hype.

“TSX Venture Exchange has clear policies regarding investor relations activities but we have no intention of penalizing our listed entrepreneurs for arm’s length, third-party content,” Managing Director Brady Fletcher said by email. 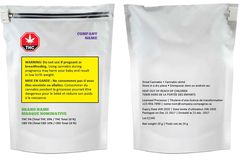