First, there was the smash success of the Beyond Burger, leading to a planned IPO from the California plant-based company behind it, Beyond Meat. Then came the announcement last month that Canadian meat behemoth Maple Leaf Foods Inc. plans to seize a piece of the burgeoning alternative protein market with the launch of a rival veggie burger, heralding it as one the greatest creations in the company’s history.

There’s little question, the buzziest innovation currently on the lips of everyone from Bill Gates and Leonardo Di Caprio to millennial hipsters and soccer moms, isn’t the latest in 3-D printing or augmented reality. It’s a plant-based burger. Never before have consumers been so beguiled by the power of plants – driven by a desire for more nutritious, humane and sustainable products. This growing consumer preference is disrupting the entire food chain, forcing food companies to change in order to deliver the goods – goods that are increasingly not only plant-based, but natural, organic, non-genetically modified (GMO) and artisanal.

This food revolution is also creating new opportunities for investors with a desire to combine their investment needs with progress on environmental, social and governance (ESG) issues. With $2.1-trillion in responsible assets under management in Canada alone at the end of 2017, according to the Responsible Investment Association (RIA). Representing a 42-per-cent increase in growth over two years, ESG investing is arguably the most significant investing initiative this century. All told, these assets represented 51 per cent of Canada’s investment industry, the RIA said.

Recent studies from the RIA show that combatting climate change is the most pressing issue for conscientious investors – one reason behind the rise of plant-based foods, given their lower carbon footprint relative to meat production. However, many investors are also concerned about the ethics of animal production, protecting worker rights and finding more sustainable ways to feed the world’s burgeoning population. Meanwhile, the current cultural quest for health and wellness is clearly also contributing to the demand for healthier products.

The upshot? An explosion of innovation. The big food conglomerates, challenged for growth with a product portfolio that is sometimes decades old, are looking for ways to overhaul their line-up in order to keep pace. Meanwhile, these industry changes are also allowing smaller companies a point of entry into new markets, often outside what has been the traditional purview of major industry players. What’s more, many of these small- and mid-cap companies have growth rates that far outstrip those of traditional food companies, creating attractive opportunities for investors.

Certainly much of the growth has been in plant-based proteins, giving rise to companies such as Beyond Meat, the company behind the Beyond Burger, financed by the likes of both Mr. Gates and Mr. Di Caprio, which launched at A&W Canada last summer to sold-out crowds. The burger recently also got a splashy rollout at U.S. fast-food restaurant chain Carl’s Jr., launching during Super Bowl Sunday, the world’s largest ad stage. It plans to list on the Nasdaq exchange under the symbol BYND.

There are also companies on a steep growth trajectory that were early market movers in the plant-based beverage category, selling almond-, cashew- and coconut-based milks. Meanwhile, other disruptors are working further down the supply chain with much less consumer awareness. Chr. Hansen A/S, a Danish bioscience firm listed on the Copenhagen exchange that we currently own, for example, derives more than 80 per cent of its revenue developing enzymes for preserving foods such as yogurt and milk, providing alternatives to antibiotics for animals and protecting crops using natural bacteria instead of pesticides.

A growing number of companies in the business of producing sustainable food are seeking to distinguish themselves even further in the minds of both investors and consumers. Some are pursuing a B Corp. designation, a rigorous certification process typically awarded small- and mid-cap companies that operate within the highest standards of social and environmental performance, and public transparency. For many, the B Corp. is proving to be a comprehensive lens through which to evaluate a company.

And while all of this activity is creating new possibilities for the growing cohort of investors intent on changing the world one sustainable investment at a time, these consumer shifts have certainly proven taxing for many food conglomerates. Some are responding by innovating and introducing their own versions of category killers. Others are scouring the landscape for M&A opportunities, snapping up the disruptors before they gain too large a slice of the pie.

Clearly, consumers have never had so much choice. Even better? Healthier food options may also result in better investment returns as leading companies in the sector continue to improve their ESG performance.

Martin Grosskopf is a vice-president and portfolio manager at AGF Investments Inc.

The views expressed in this blog are those of the author and do not necessarily represent the opinions of AGF, its subsidiaries or any of its affiliated companies, funds or investment strategies.

Pulse of the Prairies: Why investors are pouring millions into peas as 'the future of food'
January 1, 2018 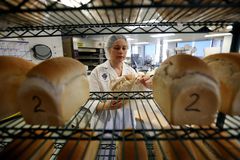