The steep slowdown in momentum stocks over the past week has been especially painful for ARK Invest’s Cathie Wood, the top stock picker of 2020.

The US$26.6-billion ARK Innovation ETF, which analysts say is beloved by retail investors, is down nearly 11 per cent over the past week, nearly 10 times the slide in the benchmark S&P 500, as companies in its portfolio, such as Tesla Inc., have stumbled. The fund has large positions in so-called momentum stocks, which tend to attract investors based on thematic trends rather than fundamentals or valuation.

“It’s a reminder for some investors that ETFs that can go up more than 100 per cent in a year can come down just as hard,” said Jimmy Lee, chief executive officer of Wealth Consulting Group, who has invested in the fund for some clients of his Las Vegas-based firm.

ARK’s Innovation fund successfully rode a wave of momentum investing during the pandemic, posting gains of 144 per cent and attracting US$14.84-billion in inflows over the past 12 months, according to Lipper data. It was the top performer among all actively managed U.S. equity funds, according to Morningstar.

Still, headwinds are growing for some of the fund’s holdings. Benchmark 10-year Treasury yields are near one-year highs as investors increasingly position for faster U.S. growth, putting pressure on momentum stocks through higher interest rates.

Ms. Wood, who is CEO and chief investment officer, seemed to suggest this could prove to be an obstacle in a Feb. 17 interview on CNBC.

Still, Ms. Wood bought another US$171-million of Tesla shares on Tuesday after shares of the electric car maker closed below US$700 for the first time this year, the firm said Wednesday.

Ms. Wood founded the firm in 2014 to focus on innovative companies after working as chief investment officer of thematic portfolios at AllianceBernstein and a co-manager of global portfolios at Tupelo Capital Management. The firm shot to prominence over the past year owing to its performance and inflows.

Some investors, however, worry that the fund’s inflated size may help accelerate a broader market sell-off.

A rash of formerly high-flying bets turning sour could accelerate a negative feedback loop in the fund’s holdings, given its large positions and widespread popularity, Peter Garnry, head of equity strategy at Saxo Bank, said in a recent research note.

The fund may also be sensitive to declines in cryptocurrencies such as bitcoin despite having no direct link, “indicating vaguely that they do respond to the same risk drivers and thus might be owned by the same investors,” he said.

Some increased buying of protective options contracts could reflect the fund’s nearly 26-per-cent rally for the year through Feb. 12 as investors sought to hedge their gains, said Christopher Jacobson, a derivatives strategist at Susquehanna Financial Group.

At the same time, Mr. Jacobson said that some investors may be positioning for a decline in momentum stocks favored by retail investors.

Meanwhile, bets against the fund gaining have risen. Short interest in the fund’s shares showed a massive spike, with 100 per cent of the shares available for shorting currently out on loan, FIS Astec Analytics data showed.

“There is risk that some of the money that flooded in early in 2021 based on triple-digit gains in 2020 will be short-lived. However, we think ARK can manage its cash flow and use the liquidity of some of its large-cap positions to mitigate the impact,” he said.

ROB Magazine
ARK Investment Management’s Catherine Wood on why she is bullish on Tesla and bitcoin, and bearish on banks
Subscriber content
February 26, 2020 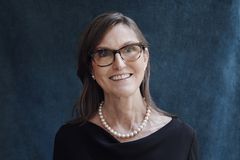