Wall Street is moving past the uncertainty of election season and, if history is a guide, investors can indeed breathe a sigh of relief.

Stocks typically post solid gains following an election, no matter which party controls the White House or Congress. On average the S&P 500 gains 8.1% in the year after the election, according to data from the research firm CFRA.

Former vice-president Joe Biden is now president-elect, although President Donald Trump has yet to concede. Meanwhile, Congress appears likely to remain split, though that depends on the outcome of two Senate run-off elections in Georgia.

The results leave financial markets looking at what apparently will be a divided government in the new year. That scenario is typically favourable to Wall Street, although the gains aren’t as fruitful as when one party controls both the White House and Congress, according to the CFRA data, which goes back to World War II.

Meanwhile, stocks typically rise in December of an election year, though in 2020 investors still have to deal with the virus pandemic and the question of how much longer it will stifle the economy.

The S&P 500 has had an average return of 8.6% overall during the years that the U.S. government was split between parties, which is just under the 8.8% average return for every year going back to 1944.

Barack Obama was the only Democratic president since 1944 to preside over a split Congress, with Biden as his vice-president. The average return for those four years was a sparkling 13%, although the gains followed a damaging recession and came as the markets were in the midst of what would become a record bull market.

Trump has had a divided government the past two years. In 2019, the S&P rose about 29% and so far this year it’s up nearly 11%, despite a plunge in March and April that ended the long bull market.

With a Biden presidency, analysts say the upside to a divided government is the likelihood that there won’t be any major changes to tax policy or business regulations, because the Democratic president can be checked by a Republican-controlled Senate.

No matter the political makeup of the government, the health of the economy is still the most important factor for investors, said Sam Stovall, chief investment strategist at CFRA.

“Investors have to take political data and stock market data with a very big grain of salt. Wall Street tends to be driven by economics, not politics,” he said.

In the near term, the markets could see a November and December bounce. Stocks seem to do well in the last two months of an election year, while September and October are often weak, according to LPL Financial.

“That makes sense, people get a little anxious that there’s a potential change coming,” said Ryan Detrick, chief market strategist for LPL Financial. “It’s almost as simple as when the uncertainty is removed, markets get back to normal.”

After declining a combined 6.6% in September and October, the S&P 500 has so far posted a 9.3% gain in November. Besides the post-election relief, the release of positive data on a COVID-19 vaccine candidate from Pfizer booster the market. Other drug makers also have potential vaccines in clinical trials.

While some uncertainty has been tempered, Biden and a still divided Congress will have to enact some kind of stimulus package in order to keep the economic recovery moving along, analysts said. That’s also the view from the Federal Reserve, where Chairman Jerome Powell has said that the central bank can only do so much to support the economy.

“I think both parties realize we need some sort of additional stimulus if they believe at all what Powell was saying,” Stovall said. 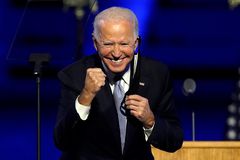 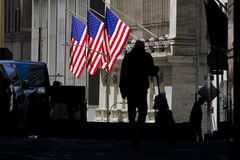 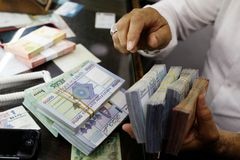