The debate between Democratic presidential candidate Joe Biden and President Donald Trump, marred by frequent interruptions and name-calling, did little to enlighten the electorate. But it was enough to turn the consensus on Wall Street toward Biden.

The fractious Sept. 29 faceoff led to a jump in Biden’s lead over President Donald Trump in several national polls, fueling moves in a broad range of assets sensitive to a decisive Democratic victory, from clean energy companies and U.S. govenrment bonds to foreign exchange derivatives that hedge against market volatility.

A second debate - which may be delayed or not take place at all - “is critical for the president, but I don’t think it matters at all to Biden. He can coast to the election,” said Jamie Cox, managing partner for Harris Financial Group.

The former vice president opened up a 10-point advantage among likely voters in an Oct. 3 poll by Reuters/Ipsos, a 1 to 2 point increase over his previous lead, following the presidential debate.

Despite the skepticism about opinion polls after Trump’s surprise win in 2016, investors have since increased bets that the Democrat will have a clearcut victory.

“Our highest probability is of a Biden win and a Democratic sweep and that keeps increasing,” said John Briggs, Americas head of strategy at NatWest Markets. “We had some client pushback on that idea but after the debate that turned around quite a bit.”

Shares of alternative energy companies, which analysts expect to prosper from policies under a Biden administration, have climbed sharply since the debate.

In currency markets, bets on post-election volatility are waning - evidence of investors positioning for a strong win for the Democrat. In Treasury markets, a bout of selling on expectations of a hefty Biden-led stimulus package has helped send yields to their highest levels in months.

“Pence delivered his messaging better than Trump, but I want to see how Trump performs in the next debate,” said Akira Takei, global fixed income fund manager at Asset Management One in Tokyo, after Wednesday’s vice presidential debate between Mike Pence and Kamala Harris. “It may appear that Biden has the lead, but I don’t trust the opinion polls.”

A Biden victory is far from a foregone conclusion, and investors continue to hedge their bets. The Democratic candidate’s widening lead, for example, has done little to dispel expectations of post-election volatility in stock options, which continue to anticipate market swings persisting into the end of the year.

Investors also remain on guard against possible reversals in sentiment in the race. Robert Phipps, director at Per Stirling Capital Management in Austin, Texas, is holding around a fifth of his portfolio in cash.

A basket of stocks tracked by JPMorgan Chase & Co, which includes green technology and trade-linked companies that would likely benefit from Democratic policies, has outperformed a basket of companies that could be hurt by a Biden presidency by about 10% between early September and Wednesday, according to a Reuters analysis.

Per Stirling’s Phipps said his portfolio’s biggest winners had been in the alternative energy space. “Every time Biden’s poll numbers go up, those investments go up,” he said.

The rising probability of a Democratic takeover of Washington by winning the presidency and control of the Senate has also helped push U.S. Treasuries out of a range in anticipation of Democrats passing a broad stimulus plan..

Yields on benchmark 10-year Treasuries could rise as high as 1.25% with a Biden victory, up from its current level around 0.75%, NatWest’s Briggs said.

“There’s a narrative in Treasuries that there’s a greater chance of a blue sweep, which means that a stimulus package will come January or February,” said Greg Staples, head of fixed income at DWS Group.

At the same time, implied volatility in the currency markets - a measure of how much investors expect spot prices to move in a given time frame - are falling, suggesting that markets now believe there is a lower chance that the election result will be disputed or drawn out..

“Markets don’t see much risk of a serious electoral challenge if Biden looks to be winning with a decisive lead – too many state outcomes would have to be reversed,” said Steve Englander, head of global G10 FX research at Standard Chartered in New York, in a note to clients. 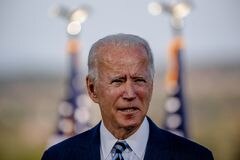 'The race is neck and neck’: What market observers are saying about the U.S. vice presidential debate
Subscriber content
October 9, 2020 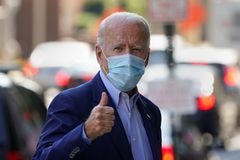