So Warren Buffett is “delighted” that Apple Inc. has decided to buy back $100-billion worth of its own stock. And really, why wouldn’t he be?

As he pointed out Saturday during Berkshire Hathaway Inc.’s annual meeting, Berkshire owns somewhere around 5 per cent of Apple. “And,” he noted happily, “with the passage of a little time, I figure we might own 6 or 7 per cent simply because they repurchased shares.” He added, “I love the idea of having our 5 per cent or whatever it may be grow to 6 or 7 perc ent without us having to lay out a dime.”

But how should the rest of us feel about this use of Apple’s cash? Tim Cook, Apple’s chief executive, has acknowledged that the buyback was prompted in large part by last year’s tax reform legislation, which not only lowered U.S. corporate tax rates, but also made it possible for Apple to repatriate the $246 billion (!) it had been holding abroad when tax rates were at that awful old 35 percent.

The fact that the tax cuts have led hundreds of other companies to also announce buybacks has created something of a furor, with critics like Senator Elizabeth Warren of Massachusetts describing them as “a sugar high for the corporations” that “boosts prices in the short run” but destroys value over the long haul.

William Lazonick, an economics professor at the University of Massachusetts at Lowell, and a leading voice against buybacks, has described them as a form of legal stock manipulation, pushing up prices not because the company has performed well but simply because there are fewer shares to trade. In March, another critic, Senator Tammy Baldwin of Wisconsin, introduced legislation that would put a halt to most stock buybacks.

On the other side of the divide are Wall Streeters like Cliff Asness, co-founder of the $224 billion hedge fund/investment firm AQR Capital Management, who think that sentiments like Warren’s and Lazonick’s are liberal poppycock. In the most recent issue of the Journal of Portfolio Management, he and two AQR colleagues co-wrote a paper titled “Buyback Derangement Syndrome.” It described most of the criticisms as “myths.”

Another supporter of buybacks, Alex Edmans of the London Business School, went so far as to tell the New York Times recently that most stock buybacks create “long-term value” - precisely what the critics believe they destroy.

Although I’m mainly in the camp of the buyback critics, I have to acknowledge that Buffett’s defence on Saturday was pretty straightforward. He said that if a company has more money than it knows what to do with - which certainly describes Apple - and it doesn’t see an acquisition or investment that is more attractive than its own stock - ditto for Apple - “then they should buy in their shares.”

Buffett had a third criteria for a sensible buyback: The company’s stock must be undervalued. Given Berkshire’s enormous position in Apple, one can certainly assume that Buffett thinks Apple is undervalued. But with a market capitalization over $900 billion, and Apple’s stock at an all-time high, that is hardly a sure thing. Indeed, one of the historic problems with buybacks is that CEOs are forever announcing them when their stock is flailing, hoping the announcement will prop it up. That is hardly an intelligent use of capital.

The critics like to say that buybacks are using capital that ought to be spent on investments that will propel the company’s future growth. But I have to acknowledge, that argument is probably wrong. “There is no apparent negative relationship between normalized investment and share repurchase activity,” Asness and his co-authors write. “In fact, the two variables have been positively correlated of late, as both investment and share repurchases have increased since the end of the financial crisis.”

But none of these arguments get to the heart of the matter, which is this: Stock buybacks are perhaps the most powerful expression of the primacy of “shareholder value.” They symbolize not just who is being rewarded but also who is being left behind. And that’s the real problem.

When Congress made capital repatriation part of the tax bill last year, it did so in the hope that companies would use that money to create jobs and to boost the living standards of workers. Although a number of companies announced one-time bonuses for workers, very few instituted permanent across-the-board wage increases. Nor have they adopted apprenticeship programs, education benefits or anything that might help workers over the long term. Instead, boards of directors have taken the view that the money “belongs” to the shareholders and should be redistributed to them. Hence the buybacks.

But it doesn’t belong to the shareholders, not really. The Delaware courts, where most shareholder lawsuits are tried, have been very clear over the years that boards can take into account other constituencies besides shareholders, including “creditors, customers, employees, and perhaps even the community generally.” There is no such beast as a “fiduciary duty” to shareholders.

When I asked Jesse Fried, a professor at Harvard Law School and the author of a recent article defending share buybacks in the Harvard Business Review, why companies weren’t using the money to give employees raises, he scoffed.

“The idea that a for-profit company shares the wealth with its workers is pretty far-fetched,” he said. “The way capitalism works is that people invest and they want a return. People who say we should give it to workers who are already getting a market wage - those people are living in a fantasy land.”

Maybe they are. But as Rick Wartzman, the author of “The End of Loyalty,” pointed out to me in an email, “Productivity has risen more than 60 per cent since the late 1970s. Yet compensation has been stagnant for the vast majority of private-sector workers (up about 11 per cent) over the same period.” In an age when labor unions have shrunk, and companies are adamant about keeping costs low, workers have almost no ability to demand wage increases. That’s why even with unemployment at 3.9 per cent, wages have risen only 2.6 per cent year-over-year, according to the Economic Policy Institute’s wage tracker.

Henry Ford famously doubled the minimum salary of Ford assembly line workers so they could afford to buy the cars they were making. From the end of World War II well into the 1970s, corporate executives saw their jobs as working on behalf of all their constituencies - not just the shareholders. Not coincidentally, this was also the era that saw the rise of the middle class.

Now the middle class is shrinking as corporate executives instead focus on “maximizing shareholder value,” which in the aftermath of the tax cut bill means doling out billions via stock buybacks and tossing a few crumbs to workers.

Toward the end of his little discussion about Apple, Buffett said of stock buybacks, “It’s very simple math, but that gets lost in all these discussion.” The math may be simple, but the deeper question buybacks pose is not simple at all:

Is shareholder value really the purpose of capitalism?

Joe Nocera is a Bloomberg Opinion columnist covering business. He has written business columns for Esquire, GQ and the New York Times, and is the former editorial director of Fortune. He is co-author of “Indentured: The Inside Story of the Rebellion Against the NCAA.”. 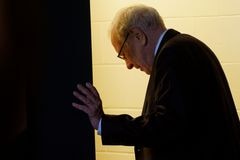 Buffett bashes bitcoin, saying the price is driven by mystique
May 7, 2018 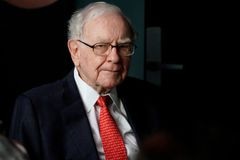 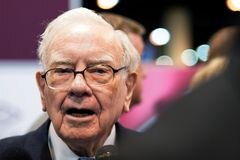