The disruptors are getting ditched as tech fear spreads well beyond Facebook.

The Nasdaq 100 Index’s gauge of one-month implied volatility is exceeding the S&P 500 Index’s by the most in over 13 years on Wednesday, a signal that fear is firmly focused on the technology behemoths that until recently had been fueling a series of all-time highs in U.S. equities.

On the heels of an unprecedented plummet in the NYSE Fang+ Index on Tuesday, the single-stock equivalents of the Cboe Volatility Index for Amazon.com Inc., Apple Inc. and Alphabet Inc. are on track for their highest average closes since February 2016.

The sell-off reveals growing unwillingness among investors to pay a hefty price for the earnings growth of the high-flying tech giants that are grappling with a potentially massive regulatory overhang, warned Michael Purves, chief global strategist at Weeden & Co.

On Tuesday, tech led the way down in the Nasdaq 100’s widest trading range since August 2015 and the 10-year U.S. Treasury yield broke below 2.8 per cent.

That tumult “underscores our view that the regime shift to be concerned with right now is much more about the potential unraveling of a high price-to-earnings/low-market-beta FANG condition than it is about a rate scare or ugly tariff news flow,” Purves wrote in a note to clients on Wednesday.

Amazon plunged more than 5 per cent in early trading Wednesday following a report by Axios that U.S. President Donald Trump is “obsessed” with regulating the e-commerce giant and is relatively unconcerned with Facebook Inc.’s treatment of users’ personal data. That would be the largest one-day decline for Amazon since October 2016. Meanwhile, Tesla Inc. bonds maturing in 2025 continue to come under pressure following a Moody’s downgrade of the high-tech carmaker’s credit rating.

The potential for a trade war saw the breakeven inflation curve fully invert in early March as investors fretted about potential tariff-driven higher prices in the near term. That dynamic has since evaporated, reinforcing the notion that tech, not trade, is the proximate cause of market angst.

“We have seen the later-dated VIX contracts move up (actually challenging the early February VIX spike highs) while Treasury volatility has steadily declined (and approaching the pre-spike lows),” Purves wrote. “This, we think, is a reflection of the potential risk of how serious and enduring the risks of a major tech unwind to the equity volatility surface.”

Focusing on out-of-the money options that offer investors protection against a decline in the underlying instrument further amplifies the extent of the tech concern. The implied volatility (a rough proxy for price) of 25-delta puts on the PowerShares QQQ Trust Series 1 exchange-traded fund exceeds that of the SPDR S&P 500 ETF Trust by the most on record. 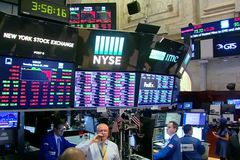 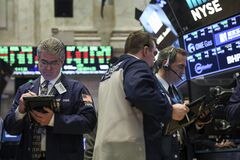