One year ago, the cannabis ETF space got a lot more crowded.

Three marijuana-focused funds started trading in February of 2018, eager to tap into investor demand for a rapidly evolving sector that was turning obscure companies into household names seemingly overnight.

Before then, investors had one option on Canadian markets: the Horizons Marijuana Life Sciences Index ETF (HMMJ-T). It proved immensely popular. To date, it’s drawn in hundreds of millions of dollars, helping propel the fund to total assets of more than $900-million. Early investors have benefited: Since its inception in April of 2017, HMMJ has surged 124 per cent by total return.

Even then, the upstart ETFs have staked out unique strategies – and two of them have made a compelling case for active management in the notoriously volatile sector. That said, loads of investors have missed out: Total assets at the newer funds are a small fraction of HMMJ’s.

The first to have its debut was the Purpose Marijuana Opportunities Fund (MJJ-NE), an actively managed ETF from Purpose Investments Inc. Next up was the Evolve Marijuana ETF (SEED-T) from Evolve Funds Group Inc., which likewise has an active strategy. Finally, Horizons ETFs Management Inc. released its second cannabis fund, the Horizons Emerging Marijuana Growers Index ETF (HMJR-NE), providing investors with exposure to small-cap companies through an underlying index.

The ensuing year has been a roller-coaster ride, to say the least. Since all three have been active, their returns differ by a whopping 80 percentage points, paced by the Purpose ETF’s 53-per-cent total return, and with Horizons’ small-cap fund lagging with a total return of negative 27 per cent.

Here’s what worked, and what didn’t, in Year One:

During the frothy days of last September, cannabis producer Tilray Inc. skyrocketed on the Nasdaq exchange, reaching a high of US$300 a share and prompting several halts in trading.

Horizons missed out on the boom. HMMJ’s underlying index added Tilray later in the month, only for the B.C. producer to fizzle to its current level of US$76.49 a share.

Purpose missed the most volatile days, too – but it had already profited handsomely. MJJ participated in Tilray’s initial public offering at US$17, trimmed its position at around US$30, and fully exited by Sept. 10 with an average sell price of roughly US$46.

It’s a situation that highlights an upside to actively managed ETFs: Fund managers can more quickly take positions in companies than those beholden to an index.

Purpose is likewise helped by its listing on the Aequitas NEO Exchange, allowing it to invest differently from funds on the Toronto Stock Exchange. TMX Group, which also operates the TSX Venture exchange, has warned that its listings must comply with U.S. federal laws. Despite U.S. state reforms, federal law prohibits the cultivation, distribution and possession of marijuana.

The rules are more relaxed on Aequitas NEO and the Canadian Securities Exchange. A slew of U.S. cannabis companies have listed on the CSE, and Purpose’s MJJ has participated in multiple reverse takeovers, including those of U.S. firms Acreage Holdings Inc. and Curaleaf Holdings Inc.

“We are very focused toward looking down south for opportunities,” said Nawan Butt, a portfolio manager at Purpose. “Whereas the Canadian market is largely contracted to be served over the next five years, the U.S. market is still very much open season.”

Much like MJJ, the Evolve Marijuana ETF has outperformed HMMJ over the past year, lending credence to the argument for an active strategy.

But its route was decidedly different – notably, SEED is listed on the TSX and doesn’t hold U.S.-based cannabis producers. Evolve has also carved out space for recognizable names connected to the industry. They include Shopify Inc., which manages online sales for several provinces and licensed producers, and Loblaw Cos. Inc., whose Shoppers Drug Mart chain sells medical marijuana to Ontario residents via an e-commerce channel.

Still, SEED’s top holdings include many of the big-name producers that have become synonymous with Canada’s cannabis industry.

“The market sentiment in marijuana is most clearly expressed in the large-cap names,” said Elliot Johnson, chief investment officer at Evolve.

During a down period last summer, Evolve bet there would be a rally as the Oct. 17 legalization date approached, Mr. Johnson said. SEED took a “maximum weight” of 10 per cent in four big players: Aphria Inc., Aurora Cannabis Inc., Canopy Growth Corp. and Cronos Group Inc. Closer to legalization, the positions were trimmed.

In broad terms, that’s essentially how the story played out. The cannabis industry went on a rally as legalization neared, then entered a prolonged chill from which it’s only recently emerged.

Horizons had a runaway hit with HMMJ. Their second cannabis fund, HMJR, has been slower out of the gate.

Despite a recent sector rally, HMJR is down substantially since inception and hit a low point of negative 51 per cent in December.

“The marijuana sector has been extraordinarily volatile,” said Mark Noble, senior vice-president of ETF strategy at Horizons. “The money tends to be following the top eight to 12 stocks, and not a lot of money is going into the smaller-cap names at this point in time.”

Still, Horizons is confident that as international markets open up, it can capitalize on smaller firms poised for growth. Much like Purpose’s fund, HMJR is listed on the Aequitas NEO Exchange, giving it access to companies that its larger ETF doesn’t touch. Recently, three of its top six holdings were U.S. companies with CSE listings.

“We wanted to have an investment structure and ETF that has the flexibility to go into” areas such as the U.S., Australia and Israel, Mr. Noble said. 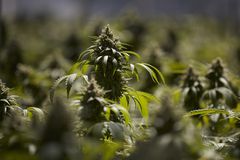 Marijuana companies face resistance as they look to grow
Subscriber content
May 16, 2018 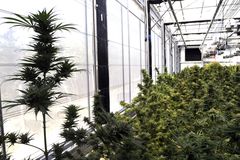