Investors in Stingray Digital Group Inc. are hoping the results of its latest acquisition spree will jazz up the music and video provider’s stock price, which has slipped in recent months after a major debt-laden deal.

Shares of Montreal-based Stingray, best known in Canada for its commercial-free streaming service Stingray Music, have fallen by about 25 per cent since hitting their all-time high of $11.05 in late April.

The stock dropped after the company announced May 2 that it was buying Newfoundland Capital Corp. Ltd. (NCC), Canada’s second-largest private radio broadcaster with 101 licences, for $506-million, including the assumption of $112-million of debt. A $138-million offering of subscription receipts was made to help pay for the deal.

Stingray co-founder and chief executive Eric Boyko has said NCC, the company’s largest acquisition to date, would provide “robust free cash flow to support Stingray’s ambitious growth strategy” and make it Canada’s largest music company. The deal was approved by NCC shareholders and is awaiting approval from the Canadian Radio-television and Telecommunications Commission (CRTC). The company anticipates a decision early September and then closing within 60 days.

Since then, the acquisitive company has purchased digital media company Novramedia, based in Toronto, for an undisclosed sum and announced a US$120-million hostile bid for U.S. competitor Music Choice, which provides music programming and content for TV and mobile. It’s the third time Stingray has bid for Music Choice – which is also suing Stingray for patent infringement – but the first offer to be made public. (Stingray anticipates that the U.S. Patent Trial and Appeal Board will rule in its favour and invalidate all of the impugned patents. “Stingray does not infringe upon third party’s valid IP rights,” Mr. Boyko said in a recent interview.)

Stingray shares rose 6 per cent after the Music Choice bid was unveiled on Aug. 3, surpassing $9 for the first time in several weeks, but then slid after the company reported first-quarter earnings that missed some analysts' expectations. Revenue increased 16 per cent year-over-year to $34.5-million for the quarter that ended June 30. Net income in that period was $1.3-million, or 2 cents a share, compared with $300,000, or a penny per share, a year ago. The company also increased its quarterly dividend, currently yielding about 2.9 per cent, by 20 per cent to 6 cents a share compared with last year.

Six out of seven analysts who cover the company have a “buy” recommendation and one has a “hold,” with a 12-month consensus target price of $11.50, implying a return of about 37 per cent from its Friday close of $8.42.

“Stingray is one of the most underrated media successes in Canada, in my view,” GMP Securities analyst Deepak Kaushal, who has a “buy” rating and $14.50 target on the stock, said in an e-mail.

CIBC analyst Robert Bek reiterated his “outperformer” rating (similar to buy) on the stock after the latest earnings, but lowered his target by a dollar to $11. Still, Mr. Bek wrote in an Aug. 8 note that the first quarter "is not an overly meaningful quarter and the focus for this story remains on the NCC acquisition.”

While shares were hit when that deal was announced, “we expect shares to continue to work their way back over the next year, especially once NCC FCF [free cash flow] is put to use after deal approvals and closing.”

TD Securities analyst Bentley Cross, who has a “hold” on Stingray and $10.50 target, is being cautious about the company’s chances of buying Music Choice. “We like the possibility of a deal with Music Choice … but given this is the third attempt in the past five years that Stingray has tried to make this acquisition, we are reluctant to include this potential upside until we have additional clarity,” Mr. Cross wrote in an Aug. 8 note. “Our reluctance is compounded by the uncertain outlook for both SVOD [subscription video on demand] growth and NCC operations.”

In an interview, Mr. Boyko said the company will continue its hunt for acquisitions across both traditional and digital music platforms. "There are many tuck-ins to do around the world," he said. "Our strategy is to mix the old school with the new school."

Mr. Boyko also said it's normal for investors to get worried when a company does a big acquisition. "It's going to take a few quarters for us to prove our strategy," he said.

Based on current projections, with the inclusion of NCC assets, Stingray is expected generate about 70 per cent of its revenue in Canada, and 10 per cent in each of the United States, Europe and the rest of the world. With NCC included, roughly 40 per cent of the company’s revenue is expected to come from radio and TV each, and the other 20 per cent from streaming services and other customers. Stingray currently reaches about 400 million subscribers in 157 countries and its mobile apps have been downloaded over 100 million times.

“For someone looking at a company trading at a cheap valuation while producing a good chunk of cash flow, we think it’s a pretty interesting name,” Mr. Modesto said. He also notes the company has some institutional backing from Caisse de dépôt et placement du Québec, “which we think is a nice stamp of approval.” 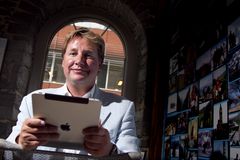