Coronavirus information
The Zero Canada Project provides resources to help you make the most of staying home.
Visit the hub
Ian McGugan
Published March 27, 2020 Updated March 27, 2020
For Subscribers
Comments
Please log in to listen to this story. Also available in French and Mandarin. Log In Create Free Account

Everyone watches the stock market. But to better understand today’s economic mayhem you need to range more widely.

Here are six key areas to monitor, ranging from viruses to household finances to Chinese shares. Together they shed light on what is driving the violent turmoil in Canadian and U.S. stock prices. Better yet, they offer clues about what is coming next.

Unlike the previous financial crisis, today’s problems did not begin on Wall Street, but in the real world, with the novel coronavirus.

Interest-rate cuts and stimulus packages can do only so much to cushion the virus’s damage. Before lockdowns can ease and a true economic rebound can occur, society needs to win the public-health battle.

To see how the battle is going on a global scale, visit the coronavirus map maintained by Johns Hopkins University (coronavirus.jhu.edu). To track how the fight is proceeding closer to home, turn to the Government of Canada’s coronavirus update page at Canada.ca.

The single best indicator of what the smart money thinks about Canada’s economic outlook is how much the Government of Canada 10-year bond is paying.

The payout, or yield, on this benchmark bond sums up what investors see as the prospects for the country’s growth over the decade ahead. A high yield suggests that output, measured in nominal dollars, will expand at a rapid clip. A low yield indicates the opposite.

One convenient way to track the 10-year yield is to go to marketwatch.com and search for “Canada 10." You’ll see that the current yield on this bond is extremely low – a mere 0.71 per cent at time of writing.

The yield has tumbled over the past year as economic prospects have darkened. People who buy these safe bonds are declaring they are willing to lend out their money for a decade for next to no return rather than risk venturing into stocks or other riskier investments.

Their caution speaks to a deep level of concern around Canada’s outlook. Until the yield moves decisively upward, don’t consider the coronavirus crisis to be over.

As the viral outbreak was smacking Canada from one direction, a spat between Saudi Arabia and Russia was walloping it from another. The failure of the two petroleum powers to agree on how to limit their oil production resulted in massive amounts of fuel flooding onto global markets – just as demand was drying up because of virus-induced lockdowns.

The resulting plunge in oil prices has wreaked havoc on Canada’s oil producers. To gauge whether any turnaround is in sight, track Western Canadian Select (WCS), the benchmark price for Alberta crude, on BNNBloomberg.ca.

WCS hit record lows below US$5 a barrel on Friday, down from nearly US$37 a barrel in January. Nobody in the Canadian oil patch can make money so long as a barrel of oil is selling for less than a designer coffee at Starbucks.

One of the biggest risks for the Canadian economy lies in the towering piles of personal debt that households have amassed in recent years. As virus-induced lockdowns and plunging oil prices cut into paycheques, a growing number of people may find it impossible to keep up with payments on their mortgages and other debt. Their distress could multiply Canada’s woes.

To detect signs of strain, turn to the insolvency statistics compiled by Canada’s Superintendent of Bankruptcy (tgam.ca/39uFEa4). Pay particular attention to the total number of consumer insolvencies, including both bankruptcies and proposals to creditors. See how that figure compares with the total at the same point a year ago. A rising number suggests growing pressure on household finances.

Do a stress test

The previous financial crisis taught us to pay close attention to the plumbing of the global financial system. Credit crunches or worries about banks’ solvency can quickly trigger wider problems.

One simple way to monitor these concerns is to check the Federal Reserve Bank of St. Louis’s financial stress index (fred.stlouisfed.org/series/STLFSI2). The index, which was recently revised, is based on multiple indicators – the spread between risky and risk-free bonds, for instance, as well as daily changes in stock prices and interest rates, among other things.

The new index shows that financial stress in recent days has spiked to a level similar to what was experienced during the financial crisis. While still beneath the worst readings in late 2008, the current readings are sending out a sobering message: This crisis is far from over.

The country that was the first to wrestle with the coronavirus may also be the first to emerge from its grasp. How fast China can get its economy back to something approaching pre-epidemic levels will be an important test, not just for the Asian giant but for other countries that will be attempting similar revivals in coming months.

The CSI 300, an index that tracks 300 large stocks on the Shanghai and Shenzhen markets, is a good way to gauge how well the Chinese effort is going (marketwatch.com). Over the past month, the index has dipped but climbed back slightly in recent days. Its message, for now, is not to expect any quick bounce back in activity after a prolonged lockdown.

The week’s most oversold and overbought stocks on the TSX Subscriber content
March 27, 2020 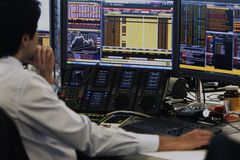 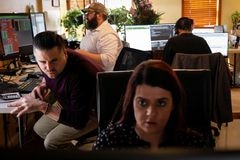