Stock markets in Canada and around the world are tumbling as investors realize the coronavirus isn’t just a Chinese problem, but a global one.

The dawning recognition that nobody can predict how the virus outbreak will proceed from here, or what the economic damage will be, has dispelled the complacency that financial markets were feeling just a week and a half ago.

Many investors are running for cover. A better plan, though, might be to assume that the stock market is doing what it usually does – adjusting prices, more or less rationally, to reflect a surge of new information. Given the prevailing level of uncertainty, sitting tight and doing nothing should be your default strategy.

Looking to the usual authorities for guidance is likely to end in frustration. For instance, Mark Zandi, the erudite chief economist at researcher Moody’s Analytics, said this week he sees a 40-per-cent probability the the virus will jump to global pandemic status. If that happens, a global recession will unfold – one in which the world’s economy would not just slow, but contract, he predicted.

This sounds frightening, and so it should. However, his forecast leaves a 60-per-cent probability of a pandemic not occurring and things returning to normal within a few months.

The scene on Bay Street amid this week’s market turmoil

If so, the rapid-fire sell-off of the past few days could just as quickly go into reverse. “This, too, shall pass, folks,” Tom Porcelli, chief U.S. economist at RBC Capital Markets, wrote this week in a reassuring note. He pointed to strong retail spending and low jobless claims as reasons to be optimistic.

He and others see bargains amid the rubble. “Energy stocks look cheap at current levels,” Morningstar analyst Dave Meats announced on Friday. So, too, do cruise lines, wrote Scott Galloway, a New York University marketing professor and author.

There is little historical precedent for judging the current downturn. The Spanish flu epidemic of 1918, which killed tens of millions of people at the end of the First World War, was followed by a full-blown bear-market drop of more than 20 per cent, according to Oliver Jones, senior markets economist at Capital Economics. By contrast, two other major pandemics of the past century – the Asian flu of 1957 and the Hong Kong flu of 1968 – barely registered on Wall Street.

The major market downturns of the past couple of decades don’t offer easy parallels, either. They resulted from giddy investors bidding asset prices past their rational limits, often with the help of aggressive financial engineering. That is what happened with tech stocks during the late 1990s or global home prices before the 2008 financial crisis.

The current downturn is fundamentally different. It’s not about bringing giddy investors back to earth. Rather, it’s about coming to terms with a microscopic pathogen that is still not well understood. Looking at different samples can result in radically different estimates of its severity.

In China’s Hubei province, where the outbreak began, the human toll has been staggering – more than 65,000 cases in a population of 59 million, with a fatality rate of 2.9 per cent, according to The Economist magazine.

The rest of China, with a population of 1.3 billion people, has suffered fewer than 13,000 cases, with a fatality rate of just 0.4 per cent, the magazine calculates. That is mainly because of aggressive quarantine policies that shuttered a large part of the country’s economy.

The coronavirus dashboard maintained by Johns Hopkins University shows a growing number of cases outside China, but on Friday, they were still small in absolute numbers – 655 in Italy, 60 in the United States, 14 in Canada, for instance. Around the world, the number of newly recovered people is now running well ahead of the number of newly reported cases.

The problem is that the virus is still spreading to new regions. Denmark, Estonia, Lithuania, the Netherlands and Nigeria all reported their first cases this week, the World Health Organization said on Friday. In response, the WHO raised its risk assessment of the virus on a global level to “very high.”

The economic impact of the virus will hinge not just on how the outbreak proceeds, but on how policy makers choose to cushion its blow. In more normal economic downturns, they usually rush to administer first aid in the form of lower interest rates. Easy money helps to support stock prices, consumer spending and home sales.

It’s not clear, however, that lower rates can do much to cushion the current downturn, especially if governments impose strict quarantines and travel restrictions that would severely crimp output. There is another problem, too: After years of aggressively chopping rates to spur economic growth, most central banks have little room to cut even more.

The murkiness around both the threat and the possible response has allowed a thousand theories to breed. “The fear of the unknown is causing traders to lose their nerve and just cut and run as far as stocks are concerned,” David Madden of CMC Markets wrote in a note on Friday.

Those nervous investors may want to ponder something: For all the angst over the stock market plunge of recent days, the decline brings us back only to the levels of last October. That warrants concern, for sure. But not panic.

The scene on Bay Street amid this week’s market turmoil
Subscriber content
February 28, 2020 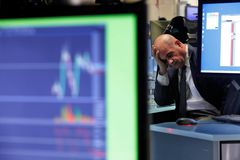 Carnage on Wall Street, but some companies thrive or recover
Subscriber content
February 28, 2020 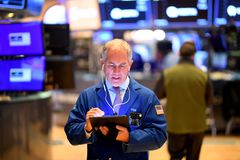