The prospect of a little more certainty in the wildly unpredictable world of global trade has boosted Canada’s auto-parts makers this week, none more so than Linamar Corp., the company most imperilled by Donald Trump.

The three companies have plants scattered across North America and face serious disruption if the Trump administration follows through with threats to implement tariffs of 20 per cent to 25 per cent on auto parts or new cars. Yet Linamar gets more than 80 per cent of North American production revenue from plants in Canada and Mexico, Peter Sklar of BMO Nesbitt Burns has estimated, making it the most vulnerable to major changes in the agreement. For Martinrea and Magna, only about half of North American plant revenue comes from these two countries.

That explains why Linamar shares have had the second-worst return of nearly two dozen North American parts makers since last November, losing almost a third of their value, according to data from S&P Global Market Intelligence. That was about the time analysts at Goldman Sachs cautioned that big gains in parts stocks in the second half of 2017 suggested investors were underestimating trade peril.

The Trump administration said on Monday it had reached a trade deal with Mexico, cutting Canada – at least for now – out of the process. It’s believed the North American vehicle-content requirements will increase to 75 per cent from 62.5 per cent, and that 40 per cent to 45 per cent of the content must be produced in high-wage jurisdictions.

“Overall, we believe this is a positive development for Canadian auto parts suppliers since the North American automotive industry will remain intact and Mexican assembly plants will need to source parts from high wage jurisdictions such as the U.S. and Canada,” Mr. Sklar wrote in a note on the deal. Absent an agreement, a 25-per-cent tariff would cause an auto-industry slowdown and even possibly force Canadian auto suppliers to move to the United States.

However, Mr. Sklar notes, the agreement is tentative, and bilateral, with only Mexico and the United States in the room. With the United States expecting Canada to sign on by week’s end, such uncertainty may not last long.

David Tyerman of Cormark Securities Inc., in a well-timed note last Thursday, suggested trade prospects were improving for the parts-makers and developments could be “a significant share price catalyst for the stocks, as the companies are performing well, have strong growth prospects and they are trading at low valuations.”

The three Canadian companies, Mr. Tyerman says, have the potential for double-digit gains in earnings a share through the next two years, but are trading at multiples of less than four to five times EBITDA, or earnings before interest, taxes, depreciation and amortization. Those multiples are low, historically, “especially given their growth potential.”

Mr. Tyerman has “buy” ratings on the three, as well as for the smaller Exco Technologies Ltd., with Martinrea his top pick. His target prices of $90 for Linamar (Tuesday’s close $57.66) and $21 for Martinrea ($13.96) represent upside for both stocks of more than 50 per cent. His US$72 target for Magna’s New York-traded shares (Tuesday’s close US$56.04) represents upside of nearly 30 per cent.

Mr. Tyerman’s late-July report, when things looked much worse, attempted to quantify the downside from a Trump tariff regime. He said he didn’t believe Canadian parts makers could absorb the tariffs, with the hit to profit margins too large to continue Canadian production, and he figure the shares could fall from roughly 20 per cent to 50 per cent for the parts makers.

“We think these cases are draconian and there are many reasons why they may not occur, but we can’t rule out worst-case scenarios at this point,” he wrote at the time. 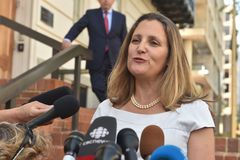 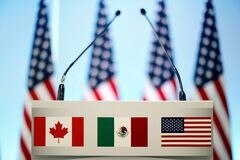