It’s a key question facing businesses and investors as a severe economic recession promises to damage corporate cash flows: Which companies will be forced to cut their dividends?

A wave of dividend cuts is already under way in the energy sector, which is facing the added misfortune of a global oil price war on top of the coronavirus pandemic.

Beyond the oil patch, non-energy firms are also beginning to reconsider their shareholder payouts.

“Capital preservation and survival should be their objective,” said Michael Sprung, president of Sprung Investment Management.

“While many of the financial service firms have a bit of a buffer in terms of capital, many companies in the energy, material, industrial and consumer discretionary firms do not.”

Dividends are considered sacrosanct in Canadian income investing circles in normal circumstances, but a mass suspension may be unavoidable in an enduring pandemic.

On Monday, Inter Pipeline Ltd. announced it was slashing its dividend by more than 70 per cent, which will save the company $525-million on an annualized basis. “We are currently in a unique and very challenging business environment,” Inter Pipeline’s chief executive officer, Christian Bayle, said.

Quarantines and self-isolation on a global scale have crushed demand for oil, at the same time as Saudi Arabia has flooded the market with cheap crude after a breakdown in its relationship with Russia. Western Canadian Select – the main benchmark for Albertan crude oil – has collapsed to less than US$5 a barrel.

The big guns of Canadian energy may not be far behind. “Should current conditions persist into the second-half of 2020, with few signs of improvements, we would expect companies under our coverage to begin looking harder at possible dividend cuts or suspensions,” Greg Pardy, an analyst at RBC Dominion Securities, wrote in a report that examined dividend sustainability across sectors.

It would take much more than that, however, to put Canadian bank dividends at risk.

The biggest banks have reliably paid quarterly distributions for decades, even as payout ratios occasionally soared during tough times, including during the financial crisis. About 35 per cent of dividend payers in the S&P/TSX Composite Index cut their payouts in 2008, according to FactSet, but the big banks were not among them.

Even if the banks run into regulatory issues related to their capital levels, RBC expects that the banks would prefer to raise cash by issuing more shares rather than cutting their dividends.

“Their dividends are very safe. They’ll have some short-term financial pressure, but they’re going to skate through this,” said Renato Anzovino, a portfolio manager at Montreal-based Heward Investment Management.

A number of big banks in Europe, on the other hand, are preserving cash on the recommendation of the European Central Bank, which asked lenders to suspend dividend and share buybacks and focus on loans to households and businesses.

Germany went even further, asking listed companies to pause dividends as a condition for receiving government support, according to a Bloomberg report. Details are still emerging about Canada’s wage subsidy program, which will cover up to 75 per cent of worker salaries at companies affected by the pandemic. But there’s no indication that dividends might factor into whether a company can qualify.

Canadian banks in general, however, are well capitalized and in better shape than many of their European peers. “Even before the COVID downturn, many European banks were in a less favourable position than North American financial institutions,” Bank of Montreal chief economist Doug Porter said in an e-mail. “That was especially the case in slow-growing economies, such as Italy.”

Dividends from Canadian insurance companies also look sustainable, according to RBC, given insurers’ strong capital ratios, low leverage and a sector-wide commitment to the payouts after being tarnished by Manulife Financial Corp.’s dividend cut in 2009.

For dividend investors looking for bargains, there is a lot to choose from.

As a result of falling stock prices, dividend yields have soared – widening the spread with very low bond yields and offering a potentially tantalizing opportunity for investors. The average dividend yield on a Canadian Big Six bank stock is now about 5.8 per cent, up from 4.3 per cent just five weeks ago.

“There are a lot of companies out there that, even in this environment, will still be receiving revenue and making profits – maybe a little lower, but the cash flow is there,” Mr. Anzovino said. 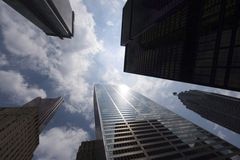 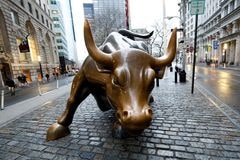 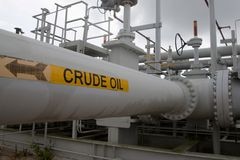