Canada’s major stock indexes will delay making changes in their membership until June, postponing a quarterly process that would have seen companies shuffled in and out in the midst of the current market turmoil at the end of March.

S&P Dow Jones Indices, the company that runs the S&P/TSX Composite Index and a number of related stock-market measures in Canada, made the call this week after consulting with companies and investors. The company’s decision applies to all its global, regional and quarterly indexes, worldwide, that typically rebalance each quarter. That includes the S&P 500, the broad-based measure of U.S. markets.

The rebalancings were to go into effect in the final week of March, but S&P Dow Jones Indices said earlier in the month it would postpone the changes as it did its consultation. The company said Tuesday it will now likely wait for the regular late-June rebalancing, but it still could make different, index-specific decisions. In a statement, the company said it made the decision “following thorough consideration of how best to govern our indices and support our clients and the users of our indices during this period of extreme global market volatility, market-wide circuit-breaker events, and exchange closures or disruptions.”

It’s not just an academic exercise: With the growth of index funds and other passive investing strategies, whether a stock is in or out of a major index can have a meaningful effect on share prices, because many fund managers who track an index need to hold shares in the companies. Canadian stocks added to the composite, which has about 230 to 240 members, depending on the quarter, can see a price bump before and even after inclusion. Similarly, companies removed from the index lose a source of demand for their shares.

There’s no definitive measure of how much fund money tracks the Canadian indexes. But research done by Morningstar Direct for The Globe and Mail in November, 2019, tracked the amount of money invested in mutual funds and ETFs that had returns that were highly correlated with the returns of the composite. Morningstar Direct found that Canadians had more than $500-billion invested in funds with at least a 90-per-cent correlation to the composite index.

S&P Dow Jones Indices uses “float,” the value of shares that aren’t held by insiders and therefore trade frequently and are easily available to the public, to judge whether a company should be included. Companies with large insider ownership, by controlling families or by institutional shareholders, will appear smaller because of this calculation. (Which shareholders S&P counts in which camp is not publicly known.)

To stay in the composite, a company’s float-adjusted market capitalization must be 0.025 per cent, or 2.5-hundredths of a percentage point, of the total value of the index. That’s about $450-million, down more than $100-million from 2019 levels.

S&P Dow Jones Indices draws from the composite to choose the S&P/TSX 60, often loosely described as a blue-chip index. The S&P/TSX 60 is not simply composed of the 60 most valuable companies on the Toronto Stock Exchange. S&P does say, however, that it feels the 60 needs to have an industry balance that represents the broader composite index. “A common misconception is that if you take out a bank, you have to put in a bank. That rarely happens," David Blitzer, chair of the index committee, said in a 2015 interview with The Globe.

S&P Dow Jones Indices added Kirkland Lake Gold Ltd. in 2019′s third quarter after it gained 75 per cent in value, and removed Husky Energy Inc., which had declined by about one-third.

Kirkland Lake employee who tested positive for COVID-19 rode in bus with others
March 31, 2020 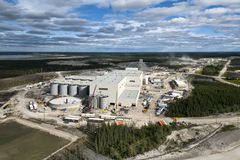