Canadian dividend yields are slipping as August comes to a close. They’re now generally below levels seen at the start of the year.

The accompanying graph shows the state of the Canadian dividend market.

It highlights the yield provided by dividend stocks listed on the TSX at the start of the year along with those when the S&P/TSX Composite peaked on Feb. 20, at its trough on March 23, and more recently on Aug. 20. Dividend stocks are sorted by yield each time and put into four groups of equal size. The graph shows the three yields that separate the four groups for each time period.

Most dividend stocks offered higher yields than government bonds at the start of 2020 when the 10-year bond yielded 1.7 per cent.

Move ahead to the S&P/TSX Composite’s peak in late February, and the situation hadn’t changed much. But the same was not true just a month later after the COVID-19 crash.

The early 2020 experience demonstrates some of the risks dividend investors take on. While dividend stocks generally offered higher yields than bonds at the start of the year, their prices swooned in March, and many companies cut their dividends when the virus swept the country.

For instance, half of the dividend stocks on the TSX fell by more than 42 per cent from the highs of Feb. 20 to the lows of March 23.

Thankfully, most of them rebounded from their lows so that half of the stocks that paid dividends at the start of the year were down by less than 10 per cent by Aug. 20. Mind you, the other half were more than 10-per-cent below where they started the year. (The returns include reinvested dividends.)

More ominously, dividend payments were eliminated by roughly 15 per cent of firms that paid them at the start of 2020. The cuts were most pronounced in the group of stocks with the highest yields, with eliminations hitting roughly a quarter of those stocks. Yikes!

Dividend eliminations were clustered in hard-hit industries such as retail, oil and gas, restaurants and travel. The COVID-19 crash was unusually bad for some businesses while leaving others practically unscathed.

The crash was damaging, but it also provided the opportunity to buy dividend stocks at low prices and correspondingly high yields. For instance, half of dividend payers offered yields in excess of 6 per cent at the March lows.

I tend to gravitate to stocks with generous but not extreme yields of the sort present in the second-highest yield group. That corresponded to yields between roughly 6 per cent and 10 per cent at the bottom in March.

Fast forward to today and the opportunities aren’t as plentiful for dividend investors. The market now offers dividend yields that are similar to – or lower than – those from the start of the year.

Yields have fallen for every group shown in the graph. Half of dividend stocks yield more than 2.9 per cent based on data from Aug. 20 and that’s down from the 6-per-cent yields seen at the March lows and the 3.4-per-cent yields from the start of the year.

Income seekers are suffering. Bond yields are at shockingly low levels with 10-year Canadian government yields near 0.6 per cent, according to the Bank of Canada. While most dividend stocks offer slightly higher yields, they come with big risks of the sort that were amply demonstrated just a few months ago.

Compounding matters, it’s hard not to worry about the possibility of rising inflation and taxation in the coming years given recent government spending. It might be time to brace oneself for what could prove to be a long and bitter winter for income investors.

There are more than just forestry stocks that are getting a boost from a resilient housing market
Subscriber content
August 22, 2020 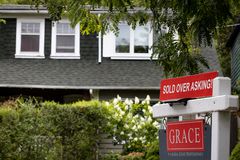