Investors will soon have more options to play the plant-based protein food trend as a growing number of companies incorporate the meat alternative into their operations.

El Segundo, Calif.-based Beyond Meat Inc., which makes “plant-based meats” sold in stores and restaurants, is poised to go public in the coming weeks, while companies such as Burger King and Maple Leaf Foods Inc. are investing more heavily into the sector.

Burger King announced earlier this month that it’s testing plant-based patties made from Redwood City, Calif.-based Impossible Foods Inc. in locations in and around St. Louis with a plan to roll out the “Impossible Whopper” nationally in the coming months. Maple Leaf Foods recently announced plans to spend US$336-million on factories to produce plant-based protein products. Food giant Nestlé SA is set to introduce “cook from raw” meat-free burger patties in Europe and the United States.

A&W Food Services of Canada Inc., a much smaller burger chain (market cap of $510-million versus $22-billion for Burger King parent Restaurant Brands International Inc.), has seen an uptick in sales since introducing the “Beyond Meat Burger” to its menu last July. More than 90,000 patties were sold in the first three days after the launch, according to Beyond Meat’s latest prospectus. The company then sold out of the product in a matter of weeks. A&W added a Beyond Meat breakfast sandwich to its menu last month.

Food companies are rushing in with plant alternatives as consumers reduce their meat intake, often for health or ethical reasons. Consumers are opposed to eating meat, for example, or see the plant-based alternatives as healthier, or prefer the substitute because it produces fewer greenhouse emissions than raising beef.

“It’s not a fad because the world has a problem; we cannot produce meat ethically in an environmentally sustainable way and there is a health risk of eating too much meat,” says Mark Satov, founder of Toronto-based Satov Consultants Inc. “I do think [companies] that are in the space stand to see reasonably attractive gains.”

R.J. Hottovy, senior retail and restaurant analyst at Morningstar, says meat alternatives are gaining traction now because they taste more like meat than they have in the past. “The products are getting better,” Mr. Hottovy says.

Offering meat alternatives alone isn’t expected to create a big overall sales boost for large food chains such as Burger King, Mr. Hottovy says, but offering them “gets rid of the veto vote,” when someone in the family or group wants a meatless option when eating out. “Having the option on the menu is worthwhile for most fast-food restaurants,” he says.

Sales at A&W have increased since it started offering Beyond Meat burgers in the third quarter of 2018, says Laurentian Bank Securities analyst Elizabeth Johnston. The Beyond Meat Burger “was likely a key driver” in the fourth quarter ended Dec. 31, when the company reported a same-store sales growth increase of 12.3 per cent compared with the same quarter a year earlier, Ms. Johnston says.

“We believe that the Beyond Meat Burger … continues to be the core driver of organic growth,” Ms. Johnston said in a Feb. 14 note, where she maintained her “hold” recommendation on the stock but increased her price target to $38 from $36.

Beyond Meat products are also available in retail stores, such as Whole Foods, including burger patties, sausages and chicken strips. Beyond Meat, which is backed by billionaire Bill Gates and Tyson Foods Inc., the largest U.S. meat processor, reported net revenues of US$87.9-million in 2018, a 170-per-cent increase from US$32.6-million in 2017, according to its prospectus. Its net loss was US$29.9-million in 2018 versus $30.4-million a year earlier, “as we invested in innovation and growth of our business.”

Ryan Modesto, chief executive officer at independent firm 5i Research, says food companies are poised to benefit from offering meat-alternatives but warns there might be concerns about how some of the products in the market are made, including ingredients that may not be considered healthy. “I don’t think it will be something that stops this trend, but it won’t be smooth sailing for this space over all,” Mr. Modesto says.

Beyond Meat says its primary ingredient is yellow peas and the products are free from soy, gluten and genetically modified organisms. Impossible Foods says it uses soy leghemoglobin, or “heme,” found in plants to give its products a meat-like flavour.

Meanwhile, McDonald’s Corp. is under pressure to add a “mainstream meatless option” to its North American menu, which included a Change.org petition with more than 164,000 signatures that has been endorsed by celebrity Ellen DeGeneres. McDonald’s offers plant-based options in Britain, Finland and Sweden, and the plant-based McAloo Tikki burger at its restaurants in India.

“I don’t see red meat going away as much as I see something that is truly a good alternative potentially being a great thing,” Mr. Satov says. “I think meat alternatives are a growing trend and here to stay.”

For Saputo, chasing a deal with largest U.S. milk producer is a matter of risk and reward Subscriber content
April 12, 2019 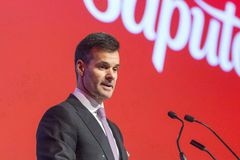 Businesses can save energy and costs with FortisBC rebates
October 12, 2018 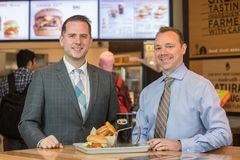