The trendy maker of mattresses-in-a-box went public on the New York Stock Exchange last week at US$12 a share, briefly jumped as high as US$13.98, and has been falling ever since. On Tuesday, it closed at US$9.92.

The clearest message from this sad trajectory is that the stock market remains firmly grounded in reality.

This is noteworthy, because when stocks are hitting new peaks – as they have been with regularity recently – irrational exuberance is often to blame. During market bubbles, investors in hot pursuit of the latest trend push valuations far beyond reasonable levels.

There may be a touch of that giddiness in the air today. The recent surge in Tesla Inc. stock, for instance, has reminded some observers of the dot-com bubble.

Look at the market more broadly, though, and it is proving surprisingly hard to impress. In contrast to past booms, investors are insisting that companies be profitable before jumping on board. In fact, it was Tesla’s surprise turn to profitability last year that ignited the current buying binge in its stock.

In cases where profits are lacking, investors have been stone-cold. They gave a thumbs down to the initial public offerings last year of both Uber Technologies Inc. and Lyft Inc., the twin giants of the ride-hailing world. The share prices of both money-losing companies tumbled well below their IPO prices.

The market was even more emphatic in rejecting WeWork, purveyor of shared office space for hipsters. The money-losing real estate company had to shelve its IPO plans in 2019 after investors backed away from the absurd valuation that had been stuck on the company by private investors.

Now Casper offers fresh evidence that investors in the public stock market want to see a clear path to profits before putting up money.

The company’s prospectus does its breathless best to stir up excitement around the “global sleep economy,” which it claims to be worth US$432-billion. Casper, it claims, is superbly positioned to serve the needs of this burgeoning market because of its “joyful consumer experience” (if that is what you call getting a bed in a box).

What the prospectus doesn’t dwell on with quite so much exuberance is Casper’s ability to bleed money. It lost US$92-million in 2018 on revenue of US$358-million. It appears on track for a similar loss for its 2019 fiscal year.

More worrisome yet is the fortune that Casper is spending on advertising and promotions. For every buck it takes in from selling its products, the company spends more than 35 cents on sales and marketing expenses. Add in the cost of the goods themselves (equivalent to a bit more than 50 cents of every revenue dollar), and there is not much left over for general expenses – and nothing for profit.

Investors are right to mark its stock down to a more reasonable level. For all of Casper’s grandiose claims, the mattress business remains a highly competitive, mature market. To make matters worse, the “bed-in-a-box” concept is no longer exclusive. About 175 companies now offer such products, according to review site GoodBed.com.

However, it has been only an average stock market performer since going public in 2015 at $17 a share. High hopes drove its share price to nearly $42 a couple of years later, but the stock has since tumbled to only half that lofty level. Its biggest attraction at the moment is a 3.7-per-cent dividend yield, backed up by solid earnings. In short, it’s a decent but unexciting business.

Casper may eventually be the same. Before bidding up its shares, though, investors are insisting on proof of its ability to generate a sustainable profit. That hard-headed attitude is welcome news because it suggests that today’s high-flying stock market may be more rational than many pessimists assume. 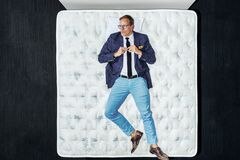