The company, which sells Marlboro cigarettes and other tobacco brands in the United States, has seen its share price fall 49 per cent over the past two years, including an 11-per-cent decline over the past week alone. The decline has pushed the dividend yield up to a remarkable 8.5 per cent – a flashing warning sign.

Yes, there are several concerns with the company.

Smoking rates are falling faster than expected. As a result, annual cigarette volumes have tumbled between 4 per cent and 4.5 per cent over the past two years, accelerating from an average historical decline of 3 per cent to 3.5 per cent previously.

The U.S. Food and Drug Administration has taken a tougher stand on smoking, and is now pursuing a ban on menthol cigarettes.

Altria and Philip Morris International Inc., which sells Marlboros outside the United States, are discussing a potential merger of the two companies – essentially reversing a spinoff in 2008. But investors are unenthusiastic about the idea, given their different regulatory environments.

And, most recently, there are rising concerns over vaping-related lung illnesses and deaths. This is a big deal given that Altria spent US$12.8-billion for a 35-per-cent stake in Juul Labs Inc., a leading e-cigarette maker, in December.

On Wednesday, Canada reported its first case of severe lung disease linked to vaping – an activity that is supposed to wean smokers from combustible cigarettes – after hundreds of similar illnesses in the United States. The U.S. government is now investigating Juul’s role in contributing to teen vaping. No wonder Altria’s share price is exploring five-year lows.

But the bond market, a reflection of credit-rating agencies and sophisticated institutional investors that tend to be less swayed by short term fears, suggests that the company is rock solid.

Genuine concern over Altria’s financial health should show up in the company’s bonds: Prices would fall and the yield would widen over ultrasafe U.S. Treasury bonds amid worries over Altria’s ability to service its debt.

That’s not happening, though. Chris Currie, a fixed-income portfolio manager at Toronto-based Goodwood Inc. (which does not own Altria bonds), pointed out that the spread between Altria’s bonds and 10-year Treasury bonds has tightened to just 170 basis points from 215 basis points in February (there are 100 basis points in a percentage point).

“This is pretty dramatic,” Mr. Currie said in an interview.

Similarly, he added that the bonds that Altria issued in February to finance its investment in Juul are trading about 10 per cent higher than the issue price. In other words, no worries here.

But where is this confidence coming from?

Let’s start with vaping: Is the risk to Altria being overstated by the stock market?

Arguably, the answer is yes. True, in December, both S&P Global Ratings and Fitch Ratings cut their credit grades on Altria by two notches, to BBB, after Altria announced its debt-financed deal for Juul. S&P noted that the investment in Juul probably won’t provide a meaningful return to Altria over the next couple of years.

And although Moody’s Investors Service held its rating unchanged at A3, it shifted its outlook to negative, given the regulatory risks weighing on vaping.

However, Maria Iarriccio, an analyst at Moody’s, said on Thursday that today’s bad headlines – while reflecting an evolving situation – aren’t necessarily raising these risks.

“We kind of anticipated that things would get worse before they got better,” Ms. Iarriccio said in an interview.

There might even be an upside here for Altria, according to S&P.

“Regulatory actions against e-cigarettes might actually benefit Altria’s core business in the near term since e-cigarettes have been accelerating volume declines of combustible cigarettes,” Brennan Clark, an analyst at S&P, said in an e-mail.

In the second quarter, the company reported a profit of nearly US$2-billion, up 6.4 per cent from the second quarter of 2018. On a per-share basis, profit rose 8.1 per cent, helped by share buybacks. Fatter profit margins are helping: They improved from 52.6 per cent last year to 54.4 per cent.

Credit-rating agencies also point out that Altria’s 10.1-per-cent stake in global brewer Anheuser-Busch InBev SA/NV adds some financial flexibility. The value of this stake has surged by about 46 per cent since the end of 2018. It is now worth more than US$19-billion, or about two-thirds of Altria’s debt.

As for dividends, they keep rising with Altria’s goal of distributing 80 per cent of its profit to shareholders. Altria now pays a quarterly dividend of 84 US cents a share, up from 80 US cents last year – a good measure of how much cash this company generates from a dying industry.

Altria has been a stock market superstar for decades. Periodic bouts of turbulence, driven by regulatory changes and lawsuits, have stood out as great buying opportunities for investors who bought on dips. This looks like one of them. Altria is the target of bargain hunters after a dismal 2018 Subscriber content
January 31, 2019 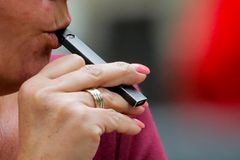