Buying a Canadian big bank stock is a good move for most investors, most of the time. An even better move: Buying an underperforming Canadian bank stock.

In the cozy world of the Big Six, which control the vast majority of lending activity in Canada, today’s lagging bank stock tends to rebound relatively quickly – rewarding nimble investors who are willing to ditch their winners.

A new exchange-traded fund will now do the heavy lifting for you.

The Hamilton Capital Canadian Bank Dynamic-Weight ETF will begin trading Tuesday on the Toronto Stock Exchange under the ticker symbol HCB. It will invest in all Big Six banks, but weight the stocks based on their recent performances rather than market capitalization. It will rebalance its holdings each month.

Three bank stocks will have an 80-per-cent weighting in the fund, or about 26.5 per cent each. These are the laggards, or oversold stocks whose current prices trail their 50-day averages.

The other three bank stocks will have a total weighting of just 20 per cent, or about 6.5 per cent each. These names are the leaders, or overbought stocks trading above their 50-day averages.

Overweighting the worst performers and underweighting the best performers might appear to be an odd strategy for success. However, the Big Six have a strong tendency to revert to the mean because of their market dominance and the fact that they don’t have to compete on price.

For data going back to 2000, we found that buying the prior year’s worst-performing bank stock and holding it for a year delivered an average annual return of 17 per cent, which is considerably better than the peer average of 11 per cent. Bank of Montreal was our top pick for 2018, given that it lagged its peers in 2017.

A study from BMO Nesbitt Burns in 2015, using a decade’s worth of data, found a similar trend: Overweighting the prior year’s three worst-performing banks stocks and underweighting the best is a market-beating approach.

For regulatory reasons, Hamilton Capital can’t divulge any back-testing data that supports its new ETF. It did, however, take a different approach that looked at mean reversion more generally.

Using monthly data for the Big Six bank stocks going back 20 years (to the end of August), it measured the performance of the prior month’s best- and worst-performing bank stocks relative to the average of their big bank peers.

This trend was exacerbated during periods of high volatility, potentially offering a smoother ride when times are tough. For example, during the 24 months that overlapped the financial crisis in 2008 and 2009, Hamilton Capital noted that the worst-performing bank stock outperformed the peer average by a dazzling 1.92 percentage points the following month.

There’s no proof that this impressive track record will continue, of course. And the ETF uses a different methodology that incorporates all six bank stocks into its holdings with a management expense ratio of 0.55 per cent.

It looks promising though. And it joins a couple of other bank-focused ETFs, giving investors access to three very different strategies for investing in Canada’s big banks.

The BMO S&P/TSX Equal Weight Banks ETF (ticker: ZEB) holds all six bank stocks in equal weights, which means that Royal Bank of Canada and National Bank of Canada, although vastly different in size, always have an equal influence. The RBC Canadian Bank Yield Index ETF (ticker: RBNK) weights stocks according to their dividend yields: The higher the yield, the bigger the weight.

Not sure if any of these ETFs is right for you? At the very least, investors now have an easy way to track how the different approaches to bank stocks are faring. 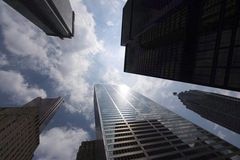