A potential truce in the oil price war between Saudi Arabia and Russia hoisted crude futures from their lowest levels in nearly 20 years on Thursday, sparking a relief rally in Canadian energy stocks ravaged by the coronavirus disease pandemic.

In a series of tweets on Thursday, U.S. President Donald Trump claimed to have brokered a deal between the feuding oil giants that would deliver a production cut of 10 million to 15 million barrels a day, which drove a 22-per-cent gain in West Texas Intermediate (WTI) to nearly US$25 a barrel.

A cut of that magnitude could lower the risk of a monumental global supply glut and help prevent, or at least defer, mass bankruptcies in the energy sector in Canada and around the world. Shares in senior Canadian producers such as Suncor Energy Inc. and Canadian Natural Resources Ltd. rallied on the day by 7 per cent to 8 per cent.

“Cutting production significantly now will mitigate or slow the chance of hitting full storage and that is good for preventing a collapse in oil to single digits,” said Rafi Tahmazian, senior portfolio manager at Canoe Financial in Calgary.

But while this apparent deal could buy oil and gas companies some time, it does not alleviate the collapse in demand for crude oil amid a recession unlike any other in modern history.

“The only way demand is going to pick up again is if we get on the other side of the virus,” Mr. Tahmazian said.

With more than 50,000 dead from COVID-19 and global infections topping one million, the virus’s continuing spread has forced vast segments of the global economy to be virtually shut down indefinitely.

The swift and brutal repricing of the energy market generated the worst quarter on record for global oil prices, with WTI falling from US$61 going into 2020, to around US$20 by the end of March.

Demand for Albertan oil essentially vanished, as Western Canadian Select fell to as low as US$3.82 a barrel this week. With oil storage facilities quickly approaching capacity, Canadian producers have started to resort to deep production cuts of their own.

With the survival of several Canadian producers suddenly at stake, investors aggressively sold off the oil patch, as the S&P/TSX Capped Energy Index plunged by more than 70 per cent from its January peak.

Then a curious rally took hold, led by the oil sand’s two biggest names – Suncor and Canadian Natural Resources, which rose by 37 per cent and 45 per cent, respectively, in just two trading days this week.

Trading data show an enormous level of buying in those two stocks – about $1-billion worth in two days – rumoured to be on behalf of a single U.S. investor. In stock forums and on Twitter, speculation swirled that Warren Buffett was the man behind the big trade in the oil sands.

The Berkshire Hathaway chief executive officer tends to be at his most aggressive in times of market distress, and is sitting on a mountainous cash hoard that totalled US$128-billion as of the end of last year. Plus, the company already owns about 15 million shares of Suncor.

“Given the immense pressure on U.S. shale producers, investing in strong, well-financed energy firms like SU and CNQ would be a move consistent with Warren Buffett’s style,” Michael Sprung, president of Sprung Investment Management, said of the two big producers in an e-mail.

On the other hand, it’s a rather blunt approach to execute an order of that size all at once and send the stock price soaring as a result, Mr. Tahmazian said. “A sophisticated buyer can take their time to build their position.”

Whoever is behind the trade is already seeing enormous gains. Since the start of the week, Suncor’s stock is up by 46 per cent, while Canadian Natural Resources has risen 49 per cent.

The prospect of a supply cut by the Organization of Petroleum Exporting Countries and its allies, including Russia, also extended a rally in smaller and mid-sized Canadian energy names, which are most at risk from a prolonged supply-demand imbalance.

Since the S&P/TSX Capped Energy Index hit a 20-year low in mid-March, it has now rallied by 53 per cent.

“The market was worried Saudi would keep the pressure on going into 2021 when most producers are completely unhedged. That is when bankruptcy worries become quite warranted,” said Eric Nuttall, senior portfolio manager at Ninepoint Partners. Market movers: Stocks that saw action on Thursday - and why
Subscriber content
April 2, 2020 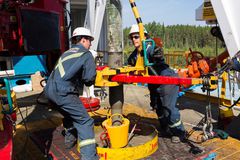