Coronavirus information
The Zero Canada Project provides resources to help you make the most of staying home.
Visit the hub
David BermanInvestment Reporter
Published March 4, 2020 Updated March 4, 2020
For Subscribers
Comments
Please log in to listen to this story. Also available in French and Mandarin. Log In Create Free Account

One thing is certain about the impact of lower interest rates on Canadian banks: Rate cuts aren’t good for profit growth at a time when banks are already struggling to impress investors.

The U.S. Federal Reserve slashed its key interest rate by half a percentage point on Tuesday and the Bank of Canada followed with the same size cut to its key rate on Wednesday.

In both cases, central banks are trying to bolster economic activity as the global spread of the coronavirus (COVID-19) skewers travel plans, supply networks and factory work.

To be sure, rate cuts translate into lower borrowing costs, which could support the Canadian housing market. That’s good for banks. Banks will also benefit if the cuts spur economic activity, encourage consumers and businesses to take on more loans and lead to fewer defaults.

There are a lot of moving parts here, and different reporting of loan books can stand in the way of firm estimates of the impact of lower rates. Nonetheless, if rate cuts continue, compressed margins could reduce profit forecasts for 2020 by as much as 8.7 per cent in the case of Toronto-Dominion Bank, according to analysts at RBC Dominion Securities.

The headwind arrives at a time when Big Six profit growth has already declined to meagre levels.

In the banks’ financial results for the fiscal first quarter ended Jan. 31, the Big Six reported that profits from their Canadian personal and commercial banking divisions – the banks’ profit and revenue engines – increased an average of just 3 per cent, year-over-year.

No wonder bank stocks are having a hard time. In 2020, the S&P/TSX Diversified Banks Index is down 4.6 per cent, trailing the broader index by 2.9 percentage points. While the S&P/TSX Composite Index rallied 2.2 per cent on Wednesday, the banks index rose just 1 per cent.

Bank stocks trade at just 10.2 times reported profits, which is lower than the 10-year average of 11.9 times earnings, according to Bloomberg. That means bank stocks are relatively cheap, but perhaps for a reason.

Gabriel Dechaine, an analyst at National Bank Financial, pointed out that when the Fed cut its key interest rate three times in the banks’ fiscal 2019, NIMs at Canadian banks’ U.S. personal and commercial banking divisions compressed by an average of 43 basis points (or 0.43 of a percentage point).

Tuesday’s cuts by the Fed will affect Canadian banks with substantial U.S. operations the most, he said in a note. TD, which has more U.S. retail branches than Canadian branches, is particularly exposed. Mr. Dechaine estimates that the Fed’s cuts will drag down the bank’s profit for the year by about 1.5 per cent.

The U.S. rate cuts could shave profits at Bank of Montreal and Royal Bank of Canada by 0.9 per cent. For Canadian Imperial Bank of Commerce, the impact could be about 0.6 per cent.

Analysts expect that the Bank of Canada’s interest rate cuts will have a smaller impact on margins. However, the overall impact on profits will be larger given the importance of Canada to the Big Six.

Darko Mihelic, an analyst at RBC Dominion Securities, based his estimates on the Fed and Bank of Canada each cutting their respective interest rates by a total of one percentage point.

He estimated that the rate cuts would subtract 59 cents from TD’s earnings per share in 2020, for a decline of 8.7 per cent. For CIBC, the hit would be 48 cents a share or 3.9 per cent, and for RBC, 33 cents or 3.5 per cent. (Estimates are based on analysts’ consensus earnings estimates, according to Bloomberg.)

He expects that BMO is relatively immune, with profits expected to fall just 0.3 per cent. And National Bank of Canada and Bank of Nova Scotia could see their profits boosted by rate cuts.

But he’s not comforted by these optimistic estimates: “We still find some of these results ‘weird’ when a bank somehow earns more net interest income when interest rates fall, but in the absence of other useful disclosure we use what we can,” Mr. Mihelic said in a note. 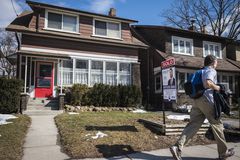