Coronavirus information
The Zero Canada Project provides resources to help you make the most of staying home.
Visit the hub
Tim ShufeltInvestment Reporter
Published May 3, 2020 Updated May 3, 2020
For Subscribers
Comments
Please log in to listen to this story. Also available in French and Mandarin. Log In Create Free Account

In a rally dominated by the giants of the stock market, the little guys are having a moment.

Small-cap stocks, which sustained the brunt of the market crash sparked by the COVID-19 pandemic, have staged a rousing comeback over the past two weeks, even after factoring in a two-day dip to end last week.

The small-cap segment in Canada has outperformed the broader stock market in eight of the past 10 trading sessions, over which time the S&P/TSX SmallCap Index rose by 8.5 per cent, compared with a 1.8-per-cent increase in the S&P/TSX Composite Index.

“That’s typically what you would see as the market tries to carve out a bottom,” said Mike Archibald, a portfolio manager at AGF Investments Inc. specializing in Canadian growth stocks. “You start to get a little bit of reversion into the things that have been left for dead.”

While resource plays make up a big portion of the Canadian small-cap market, emerging tech stocks are among the hottest names on the market. Shares in Montreal-based Lightspeed POS, a cloud-based retail and restaurant point-of-sale service provider, are up by 92 per cent since the market bottomed out on March 23, for example. Supply chain software company Kinaxis Inc. is up by 54 per cent over the same time.

That more investors are starting to bet on smaller companies, which fuel much of the Canadian economy, suggests a growing level of confidence in a postpandemic recovery.

The economic paralysis induced to defend against the spread of the coronavirus that causes COVID-19 has imperilled companies of all sizes.

The nature of the current economic predicament makes smaller Canadian business most vulnerable. More than 80 per cent of them have experienced a significant drop in demand, according to a recent survey of 13,000 businesses conducted by Statistics Canada and the Canadian Chamber of Commerce.

“While this risk is most pronounced for sole proprietary or smaller businesses, this skewed impact carries into the small-cap public market relative to the large caps,” Craig Basinger, chief investment officer at Richardson GMP, wrote in a report.

During any major economic and financial shock, investors tend to huddle in the relative safety of big companies with strong balance sheets. Outsized losses in small-cap stocks are the norm.

The pandemic sell-off followed that script, as the S&P/TSX SmallCap Index lost 46 per cent of its value, compared with a 37-per-cent drop in the overall Canadian market.

But smaller stocks are usually quicker to recoup their losses once the market’s fortunes shift.

“Small-caps and laggards have outperformed coming out of every bear market and major market correction during the last 40 years,” Goldman Sachs analysts wrote in a recent report.

Emerging from the global financial crisis, for example, the small-cap Russell 2000 index of U.S. companies outperformed the S&P 500 in four of the next five calendar years, for example.

In Canada, in the two years after equities bottomed out in March, 2009, small caps collectively generated nearly twice the returns of the S&P/TSX Composite Index.

“When the market turned, it was resource and small-cap names, which had been hit for 70 to 90 per cent, that went up by five to 10 times,” Mr. Archibald said.

There are a couple of good reasons for that pattern.

Smaller companies tend to be more closely linked to the economic boom-and-bust cycle. Their revenues are hit harder in a recession, and the companies that survive can often grow exponentially in an expanding economy.

Secondly, small-cap stocks can often be scooped up at heavy discounts to larger peers at the bottom of the market.

“If you can get multiple expansion along with earnings growth, that's really powerful,” said Don Walker, a small-cap portfolio manager at PenderFund Capital Management.

Even before the coronavirus outbreak hobbled the economy and upended financial markets, small caps were cheap. Ever since global commodity prices tipped into a downturn in 2011, in fact, the small-cap space has been locked in a perennial downturn.

This is the investor mindset that has fuelled almost a decade of large-cap dominance, and has pushed some the biggest U.S. tech stocks beyond US$1-trillion valuations.

Big tech maintained its leadership position when the stock market went into free fall in early March, and even led the way back up after stocks bottomed out, when it is typically small cap’s time to shine. By mid-April, Amazon.com Inc. and Netflix Inc. were trading at record highs.

Many investors have evidently been reluctant to put money on a small-cap resurgence. “Many of those companies don't look very good at the bottom, they're losing money, they may not have any cash flow,” Mr. Archibald said.

But as a gradual reactivation of the economy is beginning to take shape in Canada and elsewhere, the small-cap sector is showing signs of life. Whether that lasts depends on whether governments can ease restrictions without sparking another wave of infections.

“Once confidence comes back, investors will start to move down in market cap,” Mr. Walker of PenderFund said. “Money is going to move to where you can get the biggest return, and small caps are offering that.”

The Russell index reconstitution is coming up. What is it?
Subscriber content
April 16, 2020 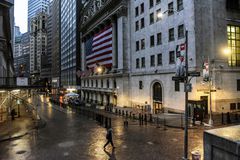