Taking their cues from the volatility that has rattled Big Tech of late, Canadian technology stocks promptly followed their U.S. peers over the ledge during the three-day sell-off that started last week.

Before Wednesday’s rebound, three straight trading days of heavy index losses were concentrated in tech stocks on both sides of the border, with the likes of Shopify Inc. and Open Text Corp. plunging alongside Apple Inc. and Amazon.com Inc.

Coming after an epic rally in software and internet names, this sell-off stoked fears that a reckoning for the red-hot U.S. tech sector was at hand, which would inevitably spread to the Canadian market.

But even if there is a bubble in tech stocks, that doesn’t mean the bubble is ready to burst. “Bubbles can get a lot crazier and can last a lot longer than I think people recognize,” said Bryden Teich, a portfolio manager at Avenue Investment Management.

With rock-bottom interest rates in place indefinitely, and with the digitization of the global economy picking up speed, there is arguably plenty of upside potential left in the tech boom.

Since the pandemic-induced market crash ended in late March, the tech sector has largely powered global stock markets to the record highs reached before the sell-off last week.

Companies that enable and facilitate remote work and e-commerce in particular have caught fire.

“The global pandemic has dramatically changed the cash flow profile of a lot of these companies,” said David Barr, chief executive of Vancouver-based PenderFund Capital Management.

“It’s pulled a lot of revenue forward, which dramatically increases the value of these businesses.”

Assigning a reasonable valuation to a rapidly shifting growth outlook is a challenging proposition, and is uncomfortable territory for value investors. This has invited comparisons with the dot-com boom two decades ago.

But today’s world is very different from the one that saw the bubble begin to pop in the spring of 2000, when the effective U.S. federal funds rate was higher than 6 per cent. Currently, it is near zero and unlikely to budge any time soon, leaving investors with few alternatives to the stock market.

Meanwhile, some of the trends accelerated by the pandemic, such as working from home and online retail, are likely to be enduring.

“There are important reasons to be positive on the tech sector,” wrote Kristina Hooper, chief global market strategist with Invesco. “I think of this rout not so much as a correction, but as … a healthy period of consolidation after a dramatic run-up.”

That run-up elevated the Nasdaq Composite Index by 75 per cent in less than six months, as Apple broke through the US$2-trillion mark in market capitalization.

In Canada, Shopify emerged as a bona fide homegrown tech champion with a globally dominant e-commerce platform. Shopify’s stock more than tripled from its March low to the end of August, making it Canada’s largest publicly traded company.

Cue the sell-off, which effectively wiped out more than two months of gains in Canadian tech stocks, as the S&P/TSX Capped Information Technology Index declined by nearly 10 per cent in four trading days, before ticking up by 2.4 per cent on Wednesday.

Investors taking profits on some of the year’s biggest winners likely contributed to the downward pressure on Canadian tech listings.

“The majority of investors in Canada spend their time looking at energy, resources and financial services,” Mr. Barr said. “Canadian technology is still a bit on the sidelines. So [those stocks] either trade cheap, or they get caught up with U.S. investors.”

Five tech sectors that will transform the economy and reward investors. Plus, the TSX bank stock that looks especially attractive right now
September 9, 2020 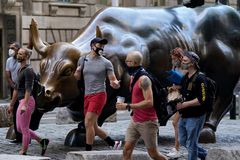 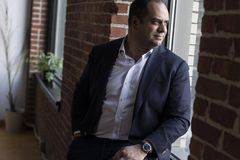