Stock analyst Meyer Shields wasn’t being entirely serious when he suggested that Warren Buffett might consider a passive investing strategy rather than picking stocks.

But he wasn’t entirely joking, either.

After all, Mr. Buffett hasn’t quite lived up to his popular reputation as a gifted, visionary investor in recent years. Over roughly the past decade, Berkshire Hathaway Inc.’s track record for stock investing has failed to beat the performance of the S&P 500 index.

“The default assumption is that if Warren Buffett does it this way, then that's the right way to do it,” Mr. Shields said. “But people should recognize that one element of the widespread investment thesis isn't accurate right now.”

That kind of salvo against Berkshire does not seem to have ingratiated Mr. Shields to the company he covers.

At Berkshire’s annual shareholder meeting, analysts from brokerage firms are brought in each year to ask questions of Mr. Buffett and vice-chairman Charlie Munger.

At this year’s installment of what’s become known as “Woodstock for Capitalists,” Mr. Shields was snubbed, once again, making him the longest-tenured Berkshire analyst who has yet to be invited.

The Canadian analyst, who studied actuarial science at the University of Toronto, now tracks the insurance industry for Keefe, Bruyette & Woods, Inc. in Baltimore, and has been following Berkshire for close to 10 years.

At no time over that period has he rated the stock a “buy,” making him a bearish outlier among what is typically a favourable consensus toward Berkshire’s stock.

Mr. Shields has criticized the company for its investment underperformance, for its enormous cash hoard earning very little in returns, for its inadequate disclosure on operations and performance, and the limited prospects for superior returns given Berkshire’s enormous size.

It’s not that Mr. Buffett’s persona as the world’s foremost value investor is unearned. His investment skill is likely unmatched in history, Mr. Shields said.

But Berkshire’s equity portfolio undeniably had its best years prior to the current bull market, which has left something of a blemish on Mr. Buffett’s record.

By analyzing the company’s reported month-end holdings over the past 20 years, Mr. Shields generated an approximate performance history for Berkshire’s equity portfolio, which holds more than US$200-billion in stocks.

A discomfort with technology stocks helps explain Mr. Buffett’s change in fortunes. While that aversion served him well when the dot-com bubble burst, tech stocks have been among the biggest drivers of the bull market in recent years. “The market started to reward different types of companies – companies with no earnings, but disruptive business models,” said Eric Kirzner, a finance professor at the University of Toronto's Rotman School of Management.

Additionally, Berkshire has become a victim of its own success, as its size makes it difficult to find investment opportunities big enough to have a material impact on returns. “Any type of big game hunting is almost impossible,” Mr. Kirzner said.

Sprawled across a huge range of industries, Berkshire has become a proxy for the U.S. economy in general, not unlike the S&P 500 itself, but with less exposure to the tech sector, Mr. Shields said.

Berkshire has grown to the point where it’s very unlikely to materially and sustainably outperform the market, he said. So why try? Why not outsource the investment portfolio to the S&P 500? Or at least Berkshire’s cash reserves?

It was a tongue-in-cheek recommendation, Mr. Shields said, calling it “highly unlikely” that Berkshire would “open a $100-billion dollar account at Vanguard.”

Besides, some investors stick with Berkshire specifically for the company’s vast stores of dry powder.

“I like the optionality that they can do great deals, that they can enhance shareholder value when everybody else is panicking,” said Murray Leith, director of investment research at Odlum Brown. “I don't get that if I buy an index fund.”

Perhaps there is a middle ground, Mr. Shields said. Berkshire spins off so much cash that it’s possible to invest many billions passively while also retaining enough liquidity for “almost any imaginable event,” he said.

At the most recent shareholder’s meeting, Mr. Buffett was asked – not by Mr. Shields, of course – about the wisdom behind parking some of Berkshire’s excess cash in indexes.

The 88-year-old’s response: “It may well make sense in the future.”

Female-led fund firms account for less than 1% of managed money in Canada. Warren Buffett is hoping to help change that
May 20, 2019 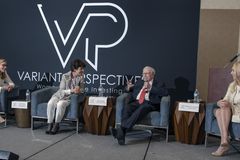 By buying into Amazon, Warren Buffett rethinks what it means to be a value investor
May 16, 2019 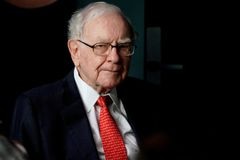