When a great stock market run comes to an end, a long reckoning is almost sure to follow.

Previous bear markets have played out over long stretches – typically 22 months on average, from peak to trough. This time around, it took 22 days.

The sell-off in Canadian stocks started in late February, quickly spiralled out of control as the COVID-19 pandemic tightened its grip on the world, and ended just 22 trading sessions later, having wiped out 37 per cent of the value of the companies on the Toronto Stock Exchange.

With the crash over in record time, the market went into recovery mode with the same kind of urgency. In just two months, the S&P/TSX Composite Index has rebounded by 33 per cent and has now recouped more than half of what was lost, putting a possible return to prepandemic highs within view in the months ahead. After the global financial crisis, by contrast, it took Canadian stocks six years to fully recover.

The warp speed of it all is a product of the pandemic-induced recession, which is unique in modern history in that it began in an instant.

Under normal circumstances, the stock market is pretty good at sniffing out a downturn well in advance.

“The recession came so abruptly, the stock market didn't discount it at all. Then it discounted it too much. Now, it's struggling to find where the middle ground is,” said Fidelity Investments portfolio manager David Wolf, who served as an adviser to two past Bank of Canada governors. 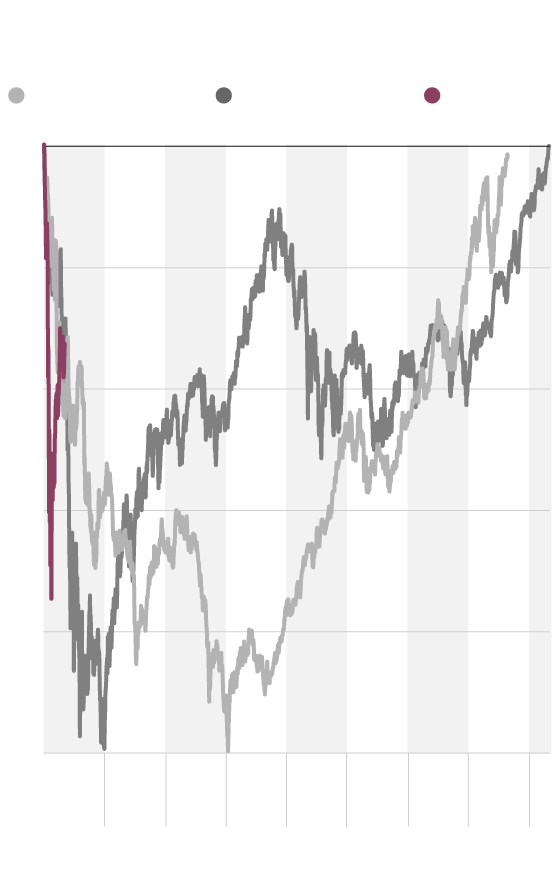 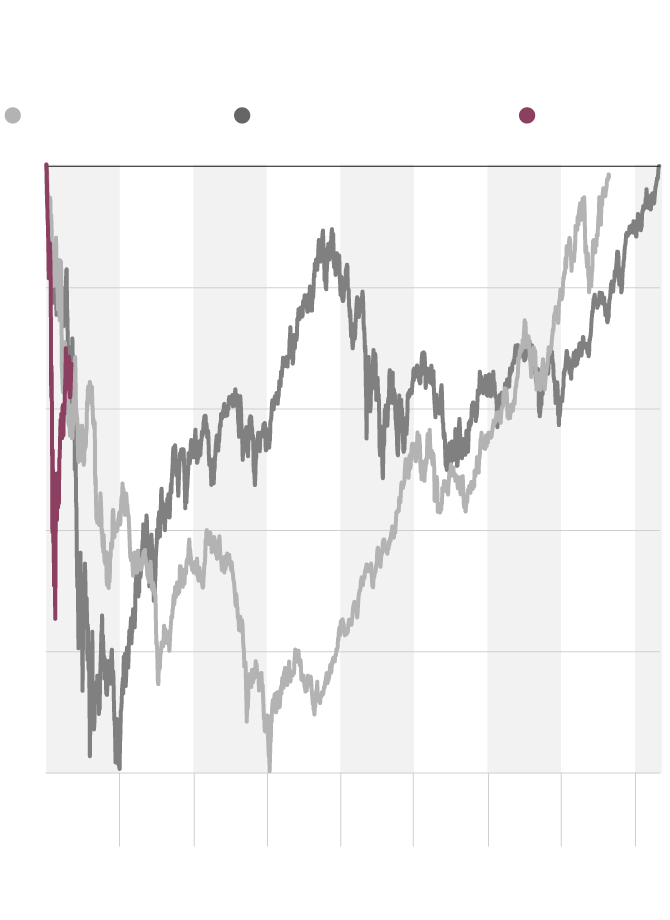 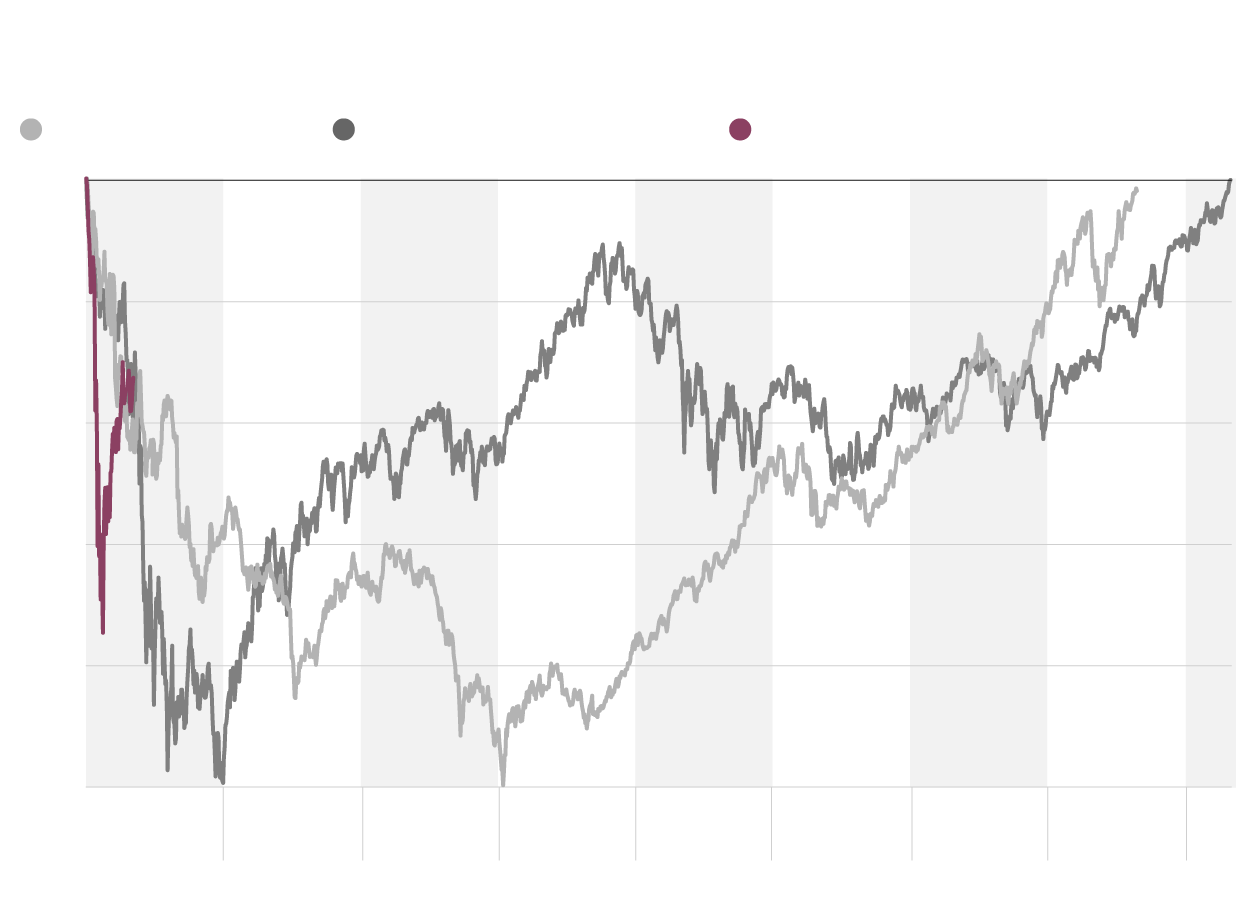 In the midst of an economic shock like no other, many of the rules for navigating a bear market don’t apply this time around. “We're following a playbook that nobody alive has ever seen,” Mr. Wolf said.

What has mystified many investors is the potency of the stock market rally despite the continuing economic disaster. The International Monetary Fund pegs the current downturn as the deepest since the Great Depression, with global GDP set to shrink by 3 per cent. The contraction will be double that pace in advanced economies.

Yet, Canadian stocks are just 17 per cent off their record high set in February, which amounts to more of a run-of-the-mill correction than a historic crash. The U.S. S&P 500 Index, meanwhile, is in positive territory over the past year. And the tech-heavy Nasdaq Composite Index is up by 4 per cent year-to-date.

But there are a couple of good reasons for a wide disconnect between stock markets and the real economy.

In a classic business cycle, a strong economy eventually overheats and generates pockets of excess production capacity, which can take years to rebalance once a recession takes hold. Rampant U.S. home construction and subprime mortgage securitization gave rise to the global financial crisis, for example. Excess spending on technology fuelled the dot-com bubble.

The current recession is a different beast. The widespread implementation of an economic lockdown placed the brunt of the downturn on the services industry, which was hit with a collapse in demand and a wave of layoffs.

“A recession with the services industry at the epicentre really doesn’t have any excesses to work through,” Craig Basinger, chief investment officer at Richardson GMP, wrote in a recent note to investors.

As long as the reactivation of the economy goes relatively smoothly and doesn’t provoke a brutal second wave of infections, demand for services should revive and rehiring can begin, Mr. Basinger said.

And if the chances for a relatively brief economic convalescence are better now than in previous meltdowns, it makes sense that the market isn’t terribly fazed by the current dismal data.

A second major force bolstering investor sentiment is the torrent of stimulus unleashed by central banks and governments to keep markets functioning and to stave off a depression. When it became clear a full-scale global pandemic was at hand, the policy response was almost immediate and seemed to stop the market crash in its tracks.

The U.S. Federal Reserve pledged unlimited support for the economy, while the Bank of Canada expanded its asset-buying program to include provincial and corporate debt for the first time in its history. Both central banks cut their policy rate to effectively zero.

“There’s a lot of cheap money out there, and you’re not making any money in fixed income,” said Les Stelmach, a portfolio manager at Franklin Templeton Canada. “The stock market might just be where all that money is forced to go.”

In other words, there is still no alternative to stocks. But there are plenty of alternatives to Canadian stocks.

The pandemic has exposed weaknesses lurking both in Canada’s economy and its financial markets, including excessive household debt, and heavy market weightings in financials and energy. It amounts to a strong argument in favour of U.S. over domestic stocks, Mr. Wolf said.

After all, bouncing back from the pandemic will rely in large part on the strength of the consumer sector, he added. “If you have a handicapped consumer facing levels of debt that are not tenable, you’ve got a real problem.”

Considering your portfolio’s exposure to Canada is just one of the many questions investors need to ask in these times of great uncertainty. How much cash should you hold? Are bonds still worth it? How risky are dividends? Today’s Report on Business investors’ guide helps answer these questions and more.

Why bonds aren’t dead yet

Where to look for stock market bargains

High and higher: Why lofty stock valuations are set to keep going up

Compared to bonds, dividend-paying stocks are what you want in your back pocket