The great mystery in financial markets right now is the surprising fall in bond yields.

The decline has confounded forecasts, baffled analysts and led to a blur of theories about what is driving the unexpected turn of events.

Markets are doing the opposite of what theory says they should do. Bond yields are supposed to go up in tandem with rising inflation and stronger economic growth. Instead, they are going down.

Since hitting 1.77 per cent at the end of March, the yield on the benchmark 10-year U.S. Treasury bond has slipped below 1.30 per cent despite a robust economic recovery and rising inflation. Over a similar period, the yield on the 10-year Government of Canada bond has fallen to around 1.25 per cent. from 1.68 per cent.

The declines are worrisome because falling bond yields can be a tipoff about spreading rot in the economy, indicating that nervous buyers are deserting riskier investments and fleeing to bonds as a haven. (Bond prices and bond yields move in opposite directions, so a growing appetite for bonds drives up prices and drives down yields.)

“The overriding concern being reflected in the bond market is that peak growth has been reached, and the benefits from fiscal policy are starting to fade,” Sophie Griffiths, an analyst at foreign exchange broker Oanda Corp., wrote in a note.

This line of reasoning offers a simple, compelling story about what is dragging down bond yields. The problem is that it is difficult to find data to support the story.

Despite a rough day on Thursday, North American stock markets are mostly priced for outright exuberance. Housing markets, too, are red hot. Recent economic data have been largely in line with expectations and both the Bank of Canada and the U.S. Federal Reserve appear positive about how the recovery is unfolding.

To be sure, an initial period of faster-than-expected growth from pandemic lows has faded into something more humdrum, but that doesn’t mean disaster looms. The notion that markets are turning skeptical about the recovery seems odd to some observers, especially when it comes to the implication that faltering growth will force central banks to keep their policies ultraloose.

“I see a lot of media headlines on how markets are abandoning growth expectations and the reflation trade, with more dovish central banks as justification for the bond rally, which all seems extraordinarily premature, ill-advised and a fundamental misinterpretation to me,” Derek Holt, head of capital markets economics at Bank of Nova Scotia, wrote in a note.

So what else could be driving the fall in bond yields? It might have something to do with foreign investors attempting to escape the negative rates on offer in their home countries and hunting for any sliver of positive yield they can find. It might also reflect a move by some institutional investors to cash in their recent stock market gains and take refuge in bonds.

But the most intriguing explanation maintains that the yield swoon largely reflects the odd complexities of U.S. government financing. What is crucial right now, according to this theory, is the looming expiration of a two-year-old bipartisan agreement to suspend the U.S. government’s debt limit.

The agreement wraps up on July 31, at which point Congress will have to approve a new deal to allow the U.S. federal government to go on borrowing money.

There is no doubt that Congress will eventually hammer out an understanding – the only alternative would be to shut down Washington – but debt-ceiling talks provide plenty of opportunity for politicians to strut, tout their pet peeves and pontificate about the state of government finances. Getting all sides to agree on a new deal can be a tedious, protracted process.

Until a pact is reached, the U.S. Treasury will be on a short rein, especially when it comes to its General Account at the Federal Reserve Bank of New York – essentially, the chequing account for the entire federal government. 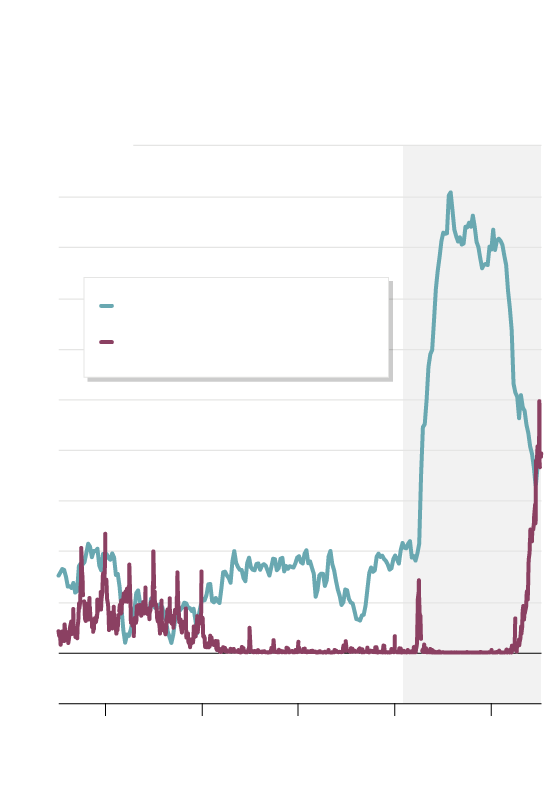 As the U.S. Treasury has reduced its cash holdings, more

and more money is flowing into reverse repo agreements

at the Federal Reserve. 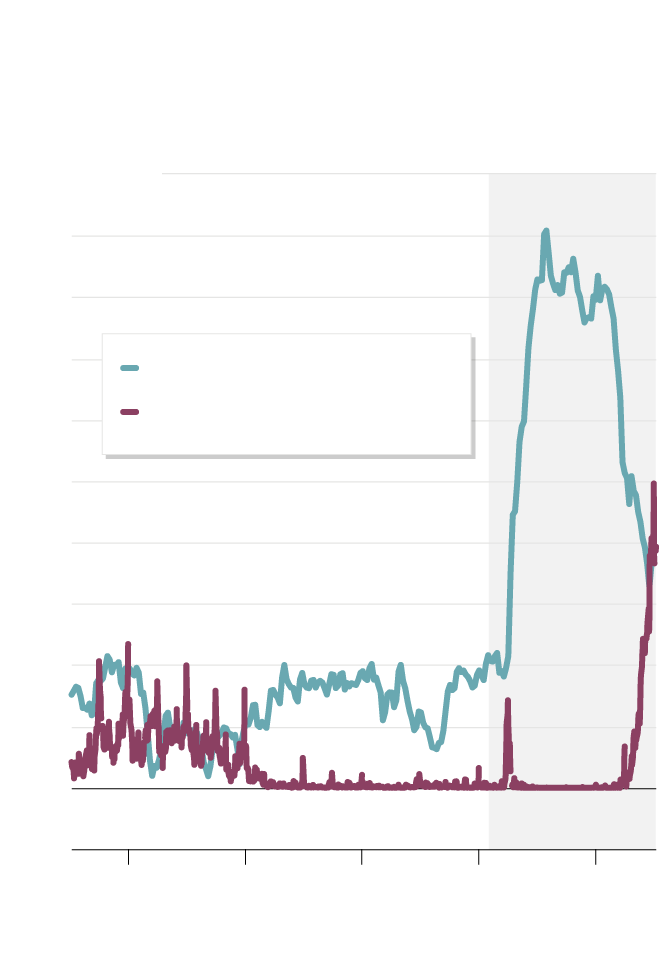 As the U.S. Treasury has reduced its cash holdings, more and

at the Federal Reserve. 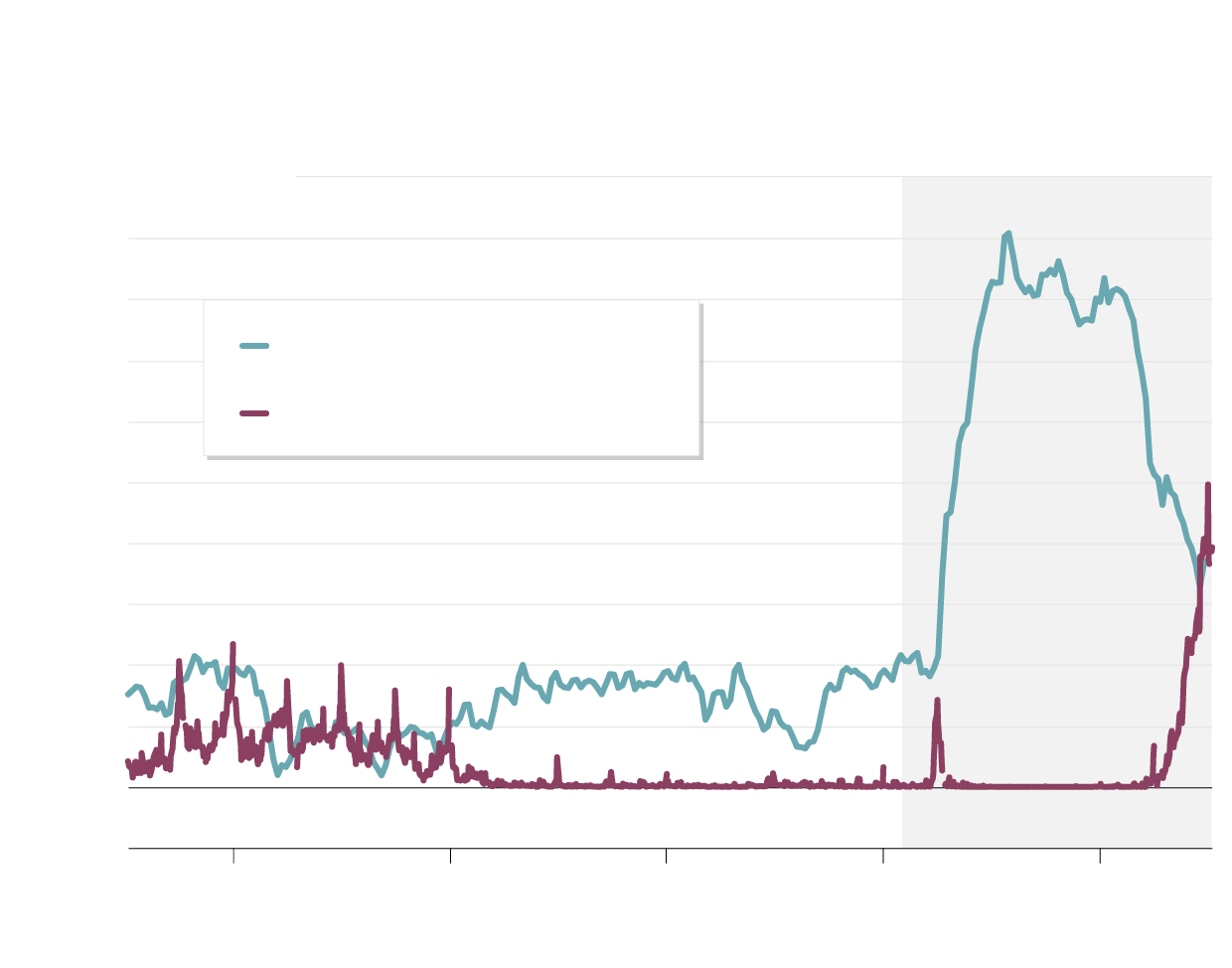 As the U.S. Treasury has reduced its cash holdings, more and more money

is flowing into reverse repo agreements at the Federal Reserve.

The Treasury said earlier this year that, when the current debt-ceiling agreement expires on July 31, it wants the amount of money in its General Account to be sitting around US$450-billion – a moderate level given the enormous size of the U.S. government. Analysts say the Treasury does not want to stockpile more cash ahead of the expiration of the debt-ceiling agreement, because doing so could be viewed as an end-run around the borrowing limit.

This all makes perfect sense. But working toward the US$450-billion target has meant flooding the U.S. economy with cash. Last year the Treasury had accumulated a hoard of roughly US$1.8-trillion to finance pandemic spending. Since then, it has reduced its cash pile by more than US$1-trillion.

Where has all that money gone? It has helped to fund stimulus payments and general government spending, of course. But so much cash is now coursing through the U.S. economy that much of it is now winding up in the Federal Reserve’s reverse repo facility – an overnight arrangement designed to mop up excess liquidity. Previously ignored, the reverse repo facility now plays host to hundreds of billions of dollars a day.

Reverse repos provide a place for financial institutions to park extra cash but offer a yield only microscopically above zero. By comparison, bonds look very attractive indeed. It may be that bond prices are climbing and yields are falling, not because of growing economic worry, but because of surging levels of cash.

Falling U.S. bond yields may signal death knell for ‘reflation’ stock trade
July 8, 2021
Why all investors need to keep a close eye on rising bond yields
April 2, 2021
Where do stocks and bond yields go from here? BMO, Rosenberg, BlackRock and other market watchers weigh in
April 1, 2021