The revelation of the identity of the “Nasdaq whale” that has been making enormous bets on tech stocks added a dose of intrigue to a wild week for stocks.

A brutal sell-off on Thursday clobbered many of the market’s most popular names, including Apple Inc. and Tesla Inc., and demonstrated how tightly stretched many traders’ nerves are after the big gains of recent months.

The plunge came despite data that continue to suggest North American economies are staging a robust rebound from the depths of the pandemic-induced recession.

One factor behind the sudden sell-off appears to have been anticipation of a Financial Times story on Friday (presumably by those approached to comment for the article) that reported SoftBank Group Corp. of Japan had spent billions of dollars in recent weeks on bets that tech stocks would continue to go up.

According to the newspaper’s sources, Softbank was the mysterious customer who caused a stir among traders in August by buying huge amounts of call options on prominent tech companies traded on the Nasdaq stock exchange. The options give the purchaser the right to purchase a stock at a preset price in the future.

It seems likely that the unexpected surge of option-buying stoked the already red-hot level of enthusiasm about tech stocks. Those stocks were among the biggest losers on Thursday and their losses may have spurred further waves of selling by computerized trading programs.

Investors were regaining their spirits by Friday afternoon, however. Apple and Tesla shares both gained ground while broad market indexes narrowed their losses from earlier in the day.

Many analysts insisted the case for tech shares was as strong as ever and stressed that the current crop of tech stars are nowhere near as frothy as their predecessors in the dot-com bubble.

“Unlike in 2000, the largest tech firms today are highly profitable and their valuations, while punchy, don’t look so obviously unsustainable,” Jonas Goltermann, senior economist at Capital Economics, wrote in a note Friday.

“We continue to believe the secular growth themes around the tech sector are unprecedented with the COVID backdrop accelerating growth stories by one to two years in some cases,” said Daniel Ives, an analyst at Wedbush Securities Inc.

More generally, this week’s tumult doesn’t appear to have affected the fundamental case for stocks. With bond yields so low, people have few alternatives to equities. Compared with a payoff of less than 0.6 per cent a year for a 10-year Government of Canada bond, the 3.5 per cent dividend yield on the S&P/TSX Composite Index or the 1.7 per cent yield on the S&P 500 look positively lush.

What remains to be seen is whether the tumult in the tech sector will encourage investors to diversify into other sectors. Strong jobs reports on Friday in both Canada and the United States add to the case for rotating into more cyclical industries to take advantage of a broadening recovery.

The strength of that recovery is now beyond doubt. As stock markets slid on Thursday and Friday, bond prices barely budged. Gold, a traditional refuge for nervous savers, lost ground. This is the opposite of what one would expect if people were running for cover.

In fact, analysts are now increasing their consensus quarterly estimates for S&P 500 earnings for the first time since the second quarter of 2018, John Butters of FactSet wrote in a note Friday. That, too, suggests this week’s turbulence is likely to fade quickly.

My dividend portfolio is bruised - not broken
Subscriber content
September 4, 2020 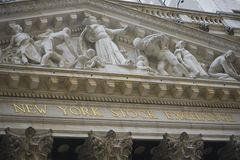