The Canadian dollar strengthened to a five-week high against its U.S. counterpart on Thursday as an improving trade outlook offset domestic data showing a wider trade deficit.

Investors’ worries of an escalating trade conflict between the United States and China have also eased. Stocks on Wall street rose for a third straight day.

“The (trade) outlook isn’t as bleak,” said Bipan Rai, senior macro strategist at CIBC Capital Markets. “The premium that was associated with trade and the Canadian dollar has eased a lot over the last couple of days.”

Canada sends about 75 per cent of its exports to the United States. Its commodity-linked economy could be hurt if global trade slows or NAFTA is scrapped.

The country’s trade deficit in February jumped to $2.69 billion from $1.94 billion in January as rail transport problems slashed exports of wheat and canola, Statistics Canada said. Analysts had forecast a $2 billion shortfall.

“With the Bank of Canada in data dependent mode, this morning’s report is not going to do much to pull them off the sidelines,” Dina Ignjatovic, an economist at Toronto-Dominion Bank, said in a research note.

Chances of a Bank of Canada interest rate hike by May held at less than 50 per cent, the overnight index swaps market indicated.

The price of oil, one of Canada’s major exports, was supported by gains in U.S. equities markets and Saudi Arabia’s unexpected hike in crude prices. U.S. crude prices settled 0.3 per cent higher at $63.54 a barrel.

Canadian government bond prices were mixed across a steeper yield curve, with the two-year up 1 cent to yield 1.812 per cent and the 10-year falling 5 cents to yield 2.182 per cent.

Canada’s employment report for March is due on Friday. 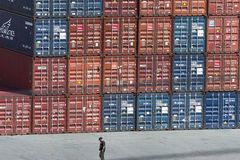