The stock market raced toward a postpandemic existence on Monday when long-struggling airlines, banks, energy producers and theatre chains surged on promising test results for a COVID-19 vaccine that could be cleared for widespread use later this month.

The S&P 500 rose 1.2 per cent, continuing a powerful rally that began last week after the U.S. presidential election. The index touched a record intraday high soon after the start of trading, but lost momentum as technology stocks slumped toward the close.

Canada’s S&P/TSX Composite Index also ended the day 1.2 per cent higher, bringing it about level where it was a month ago.

On the weekend, Joe Biden emerged as the victor in the U.S. presidential contest and he delivered a speech on Saturday night that reinforced his centrist political leanings, which may have won over Wall Street.

But some of the most spectacular gains on Monday came from beaten-up sectors that stand to benefit most from a vaccine and a return to the economic normalcy of travel and leisure, suggesting that U.S. politics took a backseat to medical science.

Pfizer Inc. and its German partner BioNTech SE announced on Monday that results from its large-scale clinical vaccine trial indicate a 90-per-cent success rate in combatting the virus, without serious safety concerns.

The results exceeded scientists’ expectations for vaccine effectiveness and suggested that the drug makers could seek U.S. authorization for emergency use of the vaccine later this month.

“I’m near ecstatic,” Bill Gruber, one of Pfizer’s top vaccine scientists, told Reuters in an interview. “This is a great day for public health and for the potential to get us all out of the circumstances we’re now in.”

Pfizer shares rose 7.7 per cent. But the news resonated well beyond the pharmaceutical sector in a rally that resembled relief after 10 months of pandemic weariness and economic strain.

Major benchmarks in Britain and Germany climbed 4.7 per cent and 4.9 per cent, respectively.

The bond market also responded in dramatic fashion, as yields surged to their highest levels in months in anticipation of stronger economic activity. The yield on the 10-year U.S. Treasury bond jumped to 0.929 per cent, up 11.4 basis points (there are 100 basis points in a percentage point).

Investors bet on a return to a lifestyle that existed before the COVID-19 pandemic arrived on North American shores early this year.

In the United States, JPMorgan Chase & Co. rose 13.5 per cent, Delta Air Lines Inc. was up 17 per cent and cruise operator Carnival Corp. surged 39.3 per cent, suggesting that investors are turning upbeat about key sectors that were dismissed as high-risk during the darkest days of the pandemic.

“Most ‘risky’ assets have rallied sharply since the U.S. election last week, and today’s news about progress towards a vaccine for COVID-19 has given them a further boost,” Jonas Goltermann, senior markets economist at Capital Economics, said in a note.

Energy stocks also rallied, after the price of West Texas Intermediate crude, a U.S. oil benchmark, rose 7.7 per cent to US$40 a barrel. (The WTI futures contract for December was up 8.5 per cent to settle at US$40.29.) The gain underpinned a rally in the Canadian energy sector, which saw Suncor Energy Inc. jump 24.7 per cent and Canadian Natural Resources Ltd. gain 22.6 per cent.

Netflix Inc. fell 8.6 per cent, Amazon.com Inc. declined 5.1 per cent and Canada’s Shopify Inc. lost 13.8 per cent. The tech-heavy Nasdaq Composite Index was off 1.5 per cent.

Gold, typically seen as a haven investment during tumultuous times, fell 4.4 per cent to US$1,865.40 an ounce, and dragged down gold producers. (December gold futures fell almost 5 per cent, settling at US$1,854.40.) Shares of Barrick Gold Corp. lost 7.4 per cent.

Tobias Levkovich, chief U.S. equity strategist at Citigroup, expects that typical havens – including the U.S. dollar, precious metals and even U.S. stock indexes (which have been outperforming global indexes this year) – could underperform as the world returns to normal.

“While it may still be six months or so before we envision enough people getting inoculated, it is likely that assets reflect the changing dynamics in advance," Mr. Levkovich said in a note.

What investors need to know to make it through the uncertainties ahead
Subscriber content
November 19, 2020 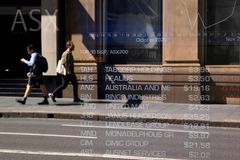 Twenty TSX growth stocks to watch in anticipation of a return to normalcy
Subscriber content
November 9, 2020

The highest yielding stocks on the TSX, plus risk data
Subscriber content
November 9, 2020