NASHVILLE, Tenn. , Sept. 14, 2020 /PRNewswire/ --   Fathom Events and ReelWorks Studios announce the exclusive re-release of THE TRUMP PROPHECY in select cinemas nationwide for a one-night event Thursday, October 8 at 7 p.m. local time. Based partially on The Trump Prophecies by Mark Taylor and Mary Colbert , the film chronicles Taylor's journey from his traumatic work as a firefighter through the evening of the 2016 election. The film's remarkable story of healing is a reminder that God cares for our world today and will bring healing to our land as He has promised. 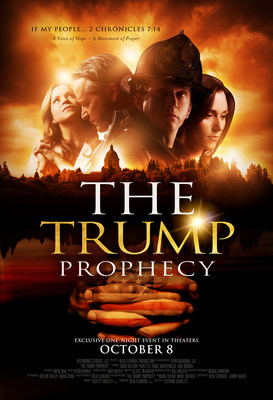 Tickets for THE TRUMP PROPHECY exclusive one-night event can be purchased at www.FathomEvents.com and participating theater box offices. A complete list of theaters can be found at the Fathom Events website.

"Based on a successful event in 2018 and consumer demand, we are pleased to be partnering with ReelWorks Studio to bring The Trump Prophecy back to the big screen, " Fathom Events CEO Ray Nutt Said .

For artwork/photos related to THE TRUMP PROPHECY, visit the Fathom Events press site or for more information about the film, visit thetrumpprophecymovie.com .

About Fathom Events:
Fathom is a recognized leader in the entertainment industry as one of the top distributors of content to movie theaters in North America . Owned by AMC Entertainment Inc. (NYSE: AMC); Cinemark Holdings, Inc. (NYSE: CNK); and Regal Cinemas, a subsidiary of the Cineworld Group (LSE: CINE.L)., Fathom operates the largest cinema distribution network, delivering a wide variety of programming and experiences to cinema audiences in all of the top U.S. markets and to more than 45 countries. For more information, visit www.FathomEvents.com .

About ReelWorks Studios:
ReelWorks Studios, LLC was founded by Rick Eldridge in August of 2009 as a production services and distribution management company. Business offices are located in Charlotte, North Carolina with representation and offices in Santa Monica, California . CEO, Rick Eldridge , has been in the entertainment business for over 35 years as a producer, director, musician, and creative visionary. The company now has over 100 titles under management comprised of feature film, television programming and digital media. Get all the latest news from ReelWorks at https://reelworks.net/ .