LAS VEGAS , June 7, 2021 /PRNewswire/ -- Legendary Mexican icon Marco Antonio Solís will make his highly anticipated debut at The Colosseum at Caesars Palace in Las Vegas , where he will present his only two U.S. solo shows this year as part of the city's Mexican Independence Day celebrations Friday, Sept. 10 and Saturday, Sept. 11 at 9 p.m. 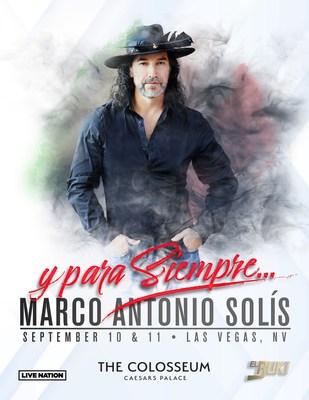 Held year after year in the Entertainment Capital of the World, Mexican Independence Day brings people together from around the globe, allowing them to share unique experiences through a variety of memorable festivities, such as concerts, parties, and special events.

El Buki's shows will instill a renewed sense of hope and comfort within his devoted fans, who are eager to enjoy his spectacular, emotion-filled performances and take part in the excitement of this unparalleled weekend-long celebration along with their idol once again. Never failing to deliver pure magic on stage, Solís' upcoming tribute to his beloved Mexico promises to create a scintillating atmosphere for his audience to not only honor the country's independence.