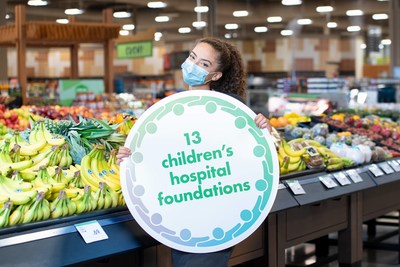 Over the last decade, there has been more than a 60 per cent increase in childrens' emergency department visits for mental health concerns[1]. Stress, isolation, and reports of abuse are on the rise since the pandemic began, with 70.2 per cent of children aged six to 18 having reported mental health deterioration in at least one area, such as anxiety or attention span[2]. The prevalence and severity of eating disorders has also substantially worsened.


"Clinicians have said the past year has been especially difficult for children and youth, and their families. Now more than ever, we need to prioritize child and youth mental health and help kids while they're still kids, giving them the best possible chance to thrive," said Mark Hierlihy , President & CEO of Canada's Children's Hospital Foundations. "Support for child and youth mental health demonstrates timely leadership and we are proud to embark on this year's fundraising campaign in partnership with the Sobey Foundation and Sobeys Inc. as we continue to address the urgent local needs for earlier interventions and better access to mental health care."

The A Family of Support: Child & Youth Mental Health Initiative supports each children's hospital to scale early child and youth mental health intervention efforts and deliver mental health programs that address needs specific to their region. The 13 children's hospitals involved are taking unique approaches to tackle child and youth mental health solutions to increase and measure one or more of treatment spaces, assessments, patients served, and people trained, and are at various stages of initiating their regional programs.

"If focusing on prevention and early intervention can keep kids safe and healthy while providing them the mental health support they need, then we can make a real difference for those families in need," said Michael Medline, President and CEO, Empire. "I've heard from so many of our teammates, customers and suppliers about how important this initiative is and how engaged they are in this cause. The results from the first year of our campaign were outstanding and I know that our entire team will push us to greater heights this year! The Sobey Foundation was instrumental in getting this initiative off the ground, and we are so proud to continue championing this important cause with the Sobey Family."

The A Family of Support: Child and Youth Mental Health Initiative is a long-term national fundraising effort generously supported by the Sobey Foundation and Sobeys Inc. in partnership with Canada's Children's Hospital Foundations. The initiative launched in 2020 and raised more than $3 million for local mental health programs supporting specific provincial needs at 13 children's hospitals across Canada . From Manitoba's tele-mental health service for remote communities to Montreal's evidence-based support for young people with eating disorders, each of the hospitals aim to strengthen both the regional and national mental health care. These are just a few examples of the tremendous work underway.

For more information, including a summary of the 13 children's hospital programs, visit afamilyofsupport.com .

About Canada's Children's Hospital Foundations
Canada's Children's Hospital Foundations (CCHF), established in 2017, is a not-for-profit organization that raises funds for a national network of hospital foundations as the largest single, non-government funder of child health in Canada . CCHF continues to receive generous support through donors within Children's Miracle Network® as well as contributions from additional companies and donors. Together, we represent 13 of Canada's children's hospitals where the greatest challenges are tackled; our hospitals see the most critical cases. Your contribution helps your local children's hospital ensure that all sick and injured children have access to the very best care from coast to coast.