CALGARY, AB , March 31, 2021 /PRNewswire/ - High Tide Inc. (" High Tide " or the " Company ") (TSXV:HITI.VN) (OTCQB:HITIF) (FRA:2LY), a retail-focused cannabis corporation enhanced by the manufacturing and distribution of consumption accessories, filed its financial results for the first fiscal quarter of 2021 ending January 31, 2021 , the highlights of which are included in this news release. The full set of Condensed Interim Consolidated Financial Statements and Management's Discussion and Analysis can be viewed by visiting High Tide's website at www.hightideinc.com , its profile page on SEDAR at www.sedar.com . 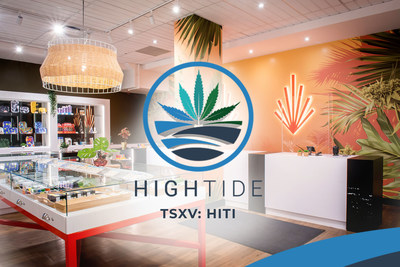 "I am extremely proud of our team for delivering the highest quarterly profit in High Tide's history.  Despite facing the same challenges that all retailers have confronted during this pandemic, we recently crossed the 80-store milestone across Canada . Between the commencement of our application to list on the Nasdaq and the subsequent filing of the 40-F form with the SEC, and securing the acquisition of Smoke Cartel, the first quarter of 2021 has seen our team deliver on significant milestones that will drive future growth," said Raj Grover, President and Chief Executive Officer. "Over the past few months, we have worked diligently to integrate META Growth into the High Tide family and as a result have already achieved 71% of our targeted synergies. As market dynamics continue to evolve in Canada , we are taking aggressive steps to adjust our business model, where appropriate, while pursuing expansion opportunities in the United States and Europe that would have an immediate positive impact on EBITDA," added Mr. Grover.

(Expressed in thousands of Canadian Dollars)

The following is a reconciliation of Adjusted EBITDA to Net Loss:

With the transaction of META having closed, the Company has solidified its leadership position in Canada.  High Tide remains focused on the Ontario market.  While pandemic restrictions caused a delay in construction in much of the province, the Company is encouraged by the Alcohol and Gaming Commission of Ontario's decision on February 16, 2021 to increase the pace of Retail Store Authorizations it issues from 20 to 30 a week.  The Company expects to reach 30 open stores in the province by September 30, 2021 , the date on which the cap for any one retailer can own is set to increase from 30 to 75.

While competition is increasing in the Alberta cannabis market, the Company has still been able to find pockets of areas where it believes it can profitably open new stores.  With the slowdown in construction in Ontario , the Company has increased the pace of buildouts in Alberta and expects more locations to open in the province next month.

The Company has been actively following developments in the U.S. cannabis sector, and while it appears that further liberalisation regarding the federal regulatory and legislative environment is possible, our immediate strategy does not rely on regulatory change.  Despite this, we remain just one transaction away from entering the bricks and mortar retail market in the U.S. when federally permissible.  High Tide believes it is very well positioned to take advantage of the growing ancillary and hemp derived CBD markets and estimates its current revenue run rate in the U.S., pro forma for the Smoke Cartel acquisition, to be over $25 million today.  The Company is in discussions with various parties across the federally permissible ecosystem in the U.S. which could help further expand its operations – and believes that its current financial health and application to list its shares on the Nasdaq may help accelerate its growth.

High Tide is a retail-focused cannabis company enhanced by the manufacturing and distribution of consumption accessories. The Company is the largest Canadian retailer of recreational cannabis as measured by revenue, with 80 branded retail cannabis locations spanning Ontario , Alberta , Manitoba and Saskatchewan . High Tide's retail segment features the Canna Cabana, KushBar, Meta Cannabis Co., Meta Cannabis Supply Co. and NewLeaf Cannabis banners, with additional locations under development across the country. High Tide has been serving consumers for over a decade through its numerous consumption accessory businesses including e-commerce platforms Grasscity.com and CBDcity.com, and its wholesale distribution division under Valiant Distribution, including the licensed entertainment product manufacturer Famous Brandz. High Tide's strategy as a parent company is to extend and strengthen its integrated value chain, while providing a complete customer experience and maximizing shareholder value. Key industry investors in High Tide include Aphria Inc. (TSX:APHA.TO) (NYSE:APHA) and Aurora Cannabis Inc. (NYSE:ACB) (TSX:ACB.TO).

For more information about High Tide Inc., please visit  www.hightideinc.com  and its profile page on SEDAR at  www.sedar.com .

Such forward-looking statements are based on assumptions that may prove to be incorrect, including but not limited to the Company's ability to execute on its business plan and that the Company will have sufficient funds to execute on its strategic growth objectives in 2021, including the ability of the Company to pursue and finance the potential acquisitions and new store openings referenced in this release; the Company's ability to successfully list its shares on the Nasdaq;  and that the Company will not be required to implement any measures to address unanticipated developments (including developments relating to COVID-19) affecting the Company's business, which could adversely affect the Company's proposed business plan. However, there can be no assurance that any one or more of the government, industry, market, operational or financial targets as set out herein will be achieved. Inherent in the forward-looking statements are known and unknown risks, uncertainties and other factors that could cause actual results, performance or achievements, or industry results, to differ materially from any results, performance or achievements expressed or implied by such forward-looking statements.