Be nice to your neighbours. They might save you more than US$10,000 in mortgage payments.

That U.S. dollar figure is based on a study of mortgages in the United States in December of 2010, which estimated that one in five households that could have benefited from refinancing failed to do so. The inflation-adjusted value of the potential savings left on the table was calculated at US$11,500 for each household.

But how might inviting the neighbours over keep you from making this mistake?

By chatting with your neighbours about common issues, such as the school bus schedule or splitting the cost of a snow removal service, you might eventually talk about your respective mortgages. And what you learn about their choices might influence your own.

Ben McCartney, an assistant professor of finance at Purdue University’s Krannert School of Management in Indiana, found the process of buying his first house to be opaque. “I had to try really hard to make sure I understood everything that was going on, especially as the mortgage was concerned,” Prof. McCartney said. “I remember thinking, ‘Wow, it can’t just be me. This whole process is a bit crazy. How does everybody else navigate this?’”

A few months later, a friend of Prof. McCartney’s was looking to purchase a home in the same neighbourhood and asked for advice. It was a light-bulb moment that spurred a research paper that provides evidence of a causal effect of socializing with the people who live nearest to us on the choices we make around our mortgages. In other words, it looks at how our neighbourhood friends affect our mortgage decisions.

“First we ask if people make the same decisions as their neighbours. It turns out they do. But even if we see that, it doesn’t mean that it’s because people talk about their mortgages and decision-making with their neighbours and then choose the same things,” Prof. McCartney said in an interview. “It could just be that similar people choose the same neighbourhoods and also like the same financial products.”

The research looked at more than one million mortgage decisions against a dataset that teased out the choices made by neighbours on the same block versus choices made by neighbours on adjacent blocks within the greater neighbourhood. Because people tend to choose a neighbourhood versus an exact street when thinking about buying, that means they are effectively randomly assigned into the “same block” group versus “adjacent block” groups.

What they found was that people did indeed make more similar choices to their next-door neighbours than neighbours farther away. “The most likely conclusion is that they were talking with their neighbours about their options,” Prof. McCartney said in an interview.

But the analysis didn’t stop there. The researchers also separated out the mortgage choices of people who were moving into a neighbourhood as well as owners who were not occupants of the houses they held mortgages against – such as landlords. Both members of these groups would in theory have had little exposure to their neighbours and should therefore look more similar to the greater neighbourhood in terms of the mortgage choices they make instead of their next-door neighbours. And that’s what the researchers found. Only after people lived in the neighbourhood for a while, thus having an opportunity to get to know their next-door neighbours, did the influencing effects show up.

The research design accounted for the impact of promotional offers by mortgage providers, controlled for economic factors, demographic factors and property characteristics.

So we now have pretty compelling evidence that social interaction can have an impact on our financial decisions. But is it a good impact?

“I know you’ll hate this answer,” Prof. McCartney said, “but it looks like it depends. At its heart, it’s a tough question to answer because it’s often hard to say that one mortgage decision is better than the other."

So just because a mortgage has the lowest interest rate does not necessarily mean that it is the best choice. That’s because some mortgages with slightly higher rates may have less restrictive prepayment options that allow you to make bulk payments and lower your overall interest charges.

That being said, the paper looks at a group of U.S. households that almost certainly would be better off if they refinanced (mortgage holders with enough equity to do so and holding mortgages obtained when rates were much higher than currently available in the market), as well as a group of mortgage holders who almost certainly would be worse off if they refinanced (those who already refinanced in the previous six months) and found that social influence effects were five times stronger for those who should refinance versus those who shouldn’t.

“So, at least in this case, social influence effects look like they lead to better decisions.” Prof. McCartney offers a word of caution, however.

During the U.S. housing boom, it’s highly likely that social-influence effects played a role in encouraging aggressive borrowing decisions, too. With Canadian indebtedness and home ownership rates among the highest in the world, one wonders to what degree that’s been happening here.

It’s nice to get a nudge to consider your options, but make sure you also do your own research when it comes to a financial decision as important as this one.

Preet Banerjee is a management consultant to the financial services and founder of MoneyGaps.com.

Four reasons why you might not get the great mortgage rate you saw online
March 14, 2019 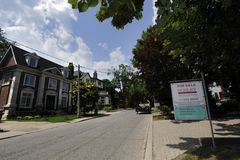 We don’t have enough to buy a house. How can we invest with similar returns to real estate?
March 19, 2019