After having had two children, high-school music teacher Sacha Richardson and her husband thought they were done with growing their family.

They’d given away all their baby gear and completed a substantial renovation on their Mississauga home, taking on the equivalent of a second mortgage. Finances were tight.

But when she got pregnant again in November, 2017, she had a decision to make about whether to take a longer paid leave than she had for her other children. The federal government extended parental leave benefit launched the next month allowing eligible parents to take an 18-month paid leave, rather than the standard 12 months. The catch: The longer leave didn’t come with more money.

In theory, they loved the idea of spending more time at home with baby number three, but with a pile of debt and two children in daycare, it just wasn’t feasible.

“This kid is the easiest kid ever,” she says now of her six-month-old son, Willem. “So as much as I’d like to take the 18 months off, money-wise, I can’t afford to.”

Parents taking the 18-month leave receive the same amount as they would with the 12-month leave, but that cash is spread out over the longer time frame. Instead of getting the standard benefit of 55 per cent of average weekly insurable earnings, up to a maximum of $547 a week, parents get 33 per cent for up to 61 weeks. The maximum weekly amount for the extended leave option in 2018 was $328.

For some parents, trying to get by on less for a longer time could force them to rack up extra debt, leaning on credit cards and lines of credit to get through the lean times, says Janea Dieno, a certified financial planner and wealth adviser for Raintree Financial Solutions in Saskatoon. In that light, by not taking the extra time off, the Richardsons’ decision to stick with the shorter, standard leave seems prudent.

“When I first got word that the government was introducing the 18-month leave, I actually cringed,” she admits. “As a mom of two myself of two little kids, I was like, ‘Oh, this is excellent. You can spend more time at home.’ But as a financial planner, I was thinking, ‘Oh, God. This is going to be a mess.’”

Nora Spinks, chief executive of the Vanier Institute of the Family, agrees there was some initial trepidation from some employers and financial experts when the federal government announced the extended leave option. For one, they worried very few families would ever take it because most families couldn’t afford it. There was also concern the longer leave would negatively affect women professionally and financially.

“There were a lot of very legitimate concerns that have actually not borne out to be true,” she says. “First of all, more people have taken it than we thought would.”

Marion Roy, who works in marketing in Toronto, decided to take the full 18 months off with her seven-month-old baby daughter, while her husband continues to work. Because her employer gave her a pay top-up for three months, making the decision to take the extra time off was easier, she says.

Even so, she worries about how taking so much time away from work will have an impact on her career. Even though she tries to stay in contact with her co-workers, and visits the office from time to time, she’s already feeling out of the loop.

“I feel when I go back, I won’t know half the company any more. Eighteen months is a long time and people come and go or get promoted, move on or retire,” she says. “It’s definitely going to be a bit of a struggle when I go back.”

That struggle can have long-term financial and career effects for women, even in Scandinavian countries, often heralded as beacons of progressive work and social policies. Recent research looking at both European and American pay trends show there’s a pay gap between women with and without children, with working mothers seeing their long-term pay drop 20 per cent compared to women without children. This discrepancy can be attributed to the fact mothers are still taking on the lion’s share of child care duties at home and paying for it at work.

Correcting this inequality is partly behind the federal government’s decision to give non-birthing parents the option to take an additional five weeks of use-it-or-lose-it leave starting in March, 2019, designed to encourage spouses to spend more time with their infant children.

Kate Barker, a director at a telecommunications company in Toronto, is convinced it’s possible to merge business and having a baby without having your career suffer. She convinced her employer to let her take 18 months off with her first child 3½ years ago, well before the government’s extended leave option was offered – and is now at home with her infant son who was born last April.

After her first leave, she says she came back guns blazing, taking on special projects at work to prove she was ready to keep climbing the corporate ladder. Those extra six months, she says, helped keep her drive for work strong.

“I was invigorated, refreshed and ready to go – and I brought my work ethic to the job,” she says, explaining she told her employer that her family was important, but so was her job. “I was here to play and bringing my renewed energy with me.”

Still, taking so much time away from work has its financial drawbacks, too. If an employer offers annual job assessments, depending on when your parental leave falls, you could wind up losing out on not one, but two, annual performance evaluations and accompanying raises.

Ms. Barker’s best advice to make an 18-month leave work? Think ahead. She and her husband started saving money to help fund parental leave nearly as soon as they got married years earlier.

“You need to plan for an 18-month maternity leave long before the stick turns blue,” she says, referring to a home pregnancy test. “All the coupons in the world are not going to help you fund what is essentially an extra six months of no income.” New parents in Canada will soon get more paid leave. But for fathers, time is just one of the obstacles
November 15, 2017 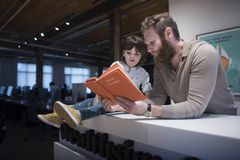 This couple is trying to reconcile competing financial goals
February 2, 2018 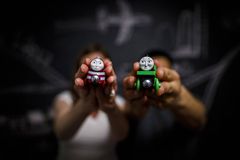