Roger is 56, Ruth is 49. They have two daughters in their early 20s who live at home and are halfway through university.

Ruth and Roger are looking to the day a few years hence when they can retire early and “travel the world,” Roger writes in an e-mail. But he is worried because of their age difference. If they spend freely early on, will there be enough money left for Ruth after he is gone? And a little something for the children or grandchildren after she is gone?

“Seems like we live paycheque to paycheque,” Roger adds. “Our primary concern is that we have a large part of our nest egg tied up in real estate.” In addition to their family home in Montreal, they have a cottage and a second house that they rent out at roughly break-even.

Roger earns $125,000 a year as a consultant. Ruth, who stayed at home until about five years ago to take care of the children, earns $75,000 in a management job. Both have defined-contribution pension plans – a form of group RRSP – at work.

Roger has substantial registered savings, some of which is invested in mutual funds and some in five-year guaranteed investment certificates (GICs). As well, he has $600,000 in non-registered funds – an inheritance, proceeds of a house sale, regular savings – parked in GICs and short-term deposits.

“Should we use our cash and pay off the line of credit?” Roger wonders. “Should we sell our investment property and bank the cash?”

We asked Ian Calvert, a financial planner and associate portfolio manager at HighView Financial Group in Toronto, to look at Roger and Ruth’s situation.

While Roger and Ruth are in good shape financially, they, like many Canadians, find themselves heavily dependent on real estate as they approach retirement, Mr. Calvert says.

Ruth’s first step is to ensure she is taking full advantage of her employer’s matching pension plan contribution, the planner says. “If she is not, she is leaving retirement dollars on the table.”

Their monthly outlays show they have surplus income available for saving, the planner says. Ruth should use some of it to contribute to her registered retirement savings plan while she is still working to take advantage of her substantial unused contribution room ($100,000). “The extra deductions will be valuable because she is in a 37.12-per-cent marginal tax bracket (federal and Quebec).”

As for Roger, “he’s done an outstanding job of accumulating savings in his RRSP and registered pension plan at work,” the planner says. “These assets will play an important role in their retirement savings.”

He suggests Roger give careful consideration to how he manages the withdrawals from these registered accounts. “Firstly, at age 65, Roger should consider creating some eligible pension income,” Mr. Calvert says. He could do this by converting some, if not all, of his RRSPs into a registered retirement income fund, or RRIF.

The strategy works for several reasons. It will allow them to split up to 50 per cent of their eligible pension income, claim the federal non-refundable pension income tax credit, as well as ensure the funds are taxed at a comparatively favourable rate because the couple’s taxable income will be quite low when they first retire.

A couple of years ago, they took out a line of credit at 2.9 per cent to renovate their cottage. Paying off the $72,000 balance before they quit working should be a top priority, the planner says. Roger should use some of his cash savings to pay it off.

Mr. Calvert is concerned about the amount of cash on the couple’s balance sheet, which he says could be better invested. Roger’s $600,000 in non-registered holdings is entirely in GICs and short-term deposits.

“With these funds being crucial to their retirement security and cash-flow needs, the opportunity cost of leaving so much money sitting in cash (or cash equivalents) is quite high,” Mr. Calvert says. Instead, Roger and Ruth should aim to build a conservative portfolio that will generate a 3-per-cent to 4-per-cent yield, with some exposure to global stock markets to protect against inflation.

As well as stocks, “it’s important that Roger and Ruth keep some cash and fixed income in their portfolio to support a balanced approach and enable them to protect their capital and take advantage of the next pullback in global equities,” the planner says.

If, once they have shifted their non-registered holdings to a balanced portfolio, there are any investment-related fees, their goal should be to have them transparent and direct, not embedded within investment products, Mr. Calvert says. This will allow them to deduct these fees for tax purposes, which will add further tax relief.

So will they have enough money?

If Roger and Ruth decide not to sell their investment property and spend $80,000 annually in retirement (which will have risen to about $90,000 by 2025 with inflation), they would exhaust their investable assets in year 2058, when he is 96 and she is 89, Mr. Calvert says. That assumes an annual rate of return on their investments of 3.5 per cent and an inflation rate of 2 per cent. They would still own about $2-million worth of real estate.

If they decided to sell the rental property, the additional savings “would ensure a more comfortable level of investable wealth,” the planner says. They could increase their lifestyle spending by $10,000 a year after they retire to pay for additional travel without having to worry about depleting their capital base.

The problem: How to ensure they can afford to retire early and travel extensively without running out of money.

The plan: Take full advantage of all the income and tax-saving moves available. Pay off the credit line and shift from GICs to a balanced portfolio of stocks and fixed income.

For this Toronto couple, plans for an early retirement hinge on compromise
Subscriber content
June 8, 2018 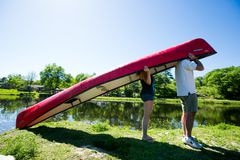 This couple making $258,000 a year are worried they are paying too much in investment fees as their retirement nears
Subscriber content
June 3, 2018 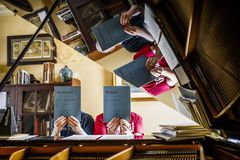 After downsizing, empty nesters prepare for life of travel, culture
May 25, 2018 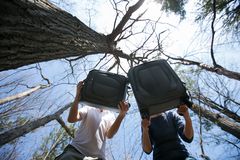